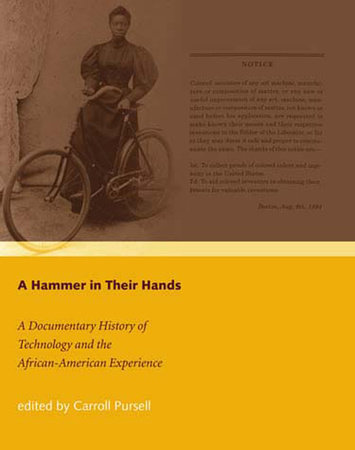 A Hammer in Their Hands

A Documentary History of Technology and the African-American Experience

About A Hammer in Their Hands

Scholars working at the intersection of African-American history and the history of technology are redefining the idea of technology to include the work of the skilled artisan and the ingenuity of the self-taught inventor. Although denied access through most of American history to many new technologies and to the privileged education of the engineer, African-Americans have been engaged with a range of technologies, as makers and as users, since the colonial era. A Hammer in Their Hands (the title comes from the famous song about John Henry, “the steel-driving man” who beat the steam drill) collects newspaper and magazine articles, advertisements for runaway slaves, letters, folklore, excerpts from biography and fiction, legal patents, protest pamphlets, and other primary sources to document the technological achievements of African-Americans. Included in this rich and varied collection are a letter from Cotton Mather describing an early method of smallpox inoculation brought from Africa by a slave; selections from Frederick Douglass’s autobiography and Uncle Tom’s Cabin; the Confederate Patent Act, which barred slaves from holding patents; articles from 1904 by Booker T. Washington and W. E. B. DuBois, debating the issue of industrial education for African-Americans; a 1924 article from Negro World, “Automobiles and Jim Crow Regulations”; a photograph of an all-black World War II combat squadron; and a 1998 presidential executive order on environmental justice. A Hammer in Their Hands and its companion volume of essays, Technology and the African-American Experience (MIT Press, 2004) will be essential references in an emerging area of study.

Looking for More Great Reads?
21 Books You’ve Been Meaning to Read
Download Hi Res
A Hammer in Their Hands

A Hammer in Their Hands