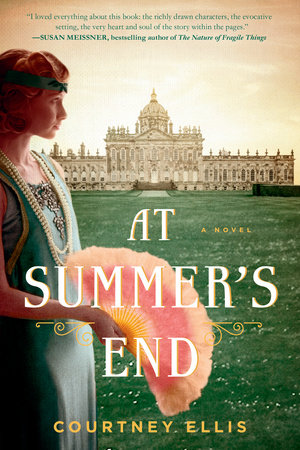 1.   Bertie’s painting resonated with Julian enough that he invited her to his home after years of isolation. What aspects of the painting do you think appealed to him most? Have you ever been affected by a work of art in this way?

2.   Bertie becomes the first person other than Gwen that Julian has seen in nearly two years. What do you think made him open his door to her that first day? Why do you think he invited her back?

3.   While this is mainly Bertie’s story, the author chose to include three other points of view in chapters that take place in years past. Why do you think these particular scenes were included? How do you feel they affected your understanding of the story? Did glimpsing the world through the Napiers’ lens influence, or even change, how you viewed their characters?

4.   The Great War did a lot to further the fight for female equality, but the battle was far from won in the 1920s. Bertie, Celia, Gwen, Lily, and even the Dowager Lady Wakeford experienced misogyny and prejudice toward women. Did you notice any issues explored in this book that women are still experiencing today? Were there any specific moments that reflected your own life experience?

5.   Despite being so young, Anna plays an important role in the book. How do you see her presence at Castle Braemore influence Bertie’s experience and feelings about the Napiers? How does Anna’s presence in the lives of her family affect their relationship to the world and to one another?

6.   There are many types of women in this story, each of them having a unique experience of the war. In what ways do these women display their strengths—both traditional and nontraditional? Do you relate to any of them more than others? Why?

7.   After spending years trying to keep Julian and Lily apart, Gwen was quick to support a romance between her brother and Bertie. What do you think influenced her decision? What might she and Julian have discussed that afternoon?

8.   Apart from Bertie, Freddie is the only other character at Castle Braemore who is not a Napier. What does his inclusion bring to the story? How do his thoughts and opinions—which sometimes contrast with the Napiers’—influence Bertie?

9.   When Julian confides in Bertie about his father scorning him for his nerves, she says, “It’s a dreadful shame that masculinity must mean hardness.” What ways do you see this idea affecting each of the men in this story, specifically Julian’s relationship with Roland? How do you think it might have influenced the young men who enlisted during the Great War? Do you think this concept is still prevalent today?

10. At the beginning of the book, Bertie is at odds with her mother, but when she returns home, they begin to see eye to eye. What did Bertie experience or learn at Castle Braemore that might have changed her mind about her family? What growth might Bertie’s family have noticed in her?

11.  Celia went seven years without speaking to Julian, only able to see his side once she realized how unwell he had been. What do you think were the most significant driving factors behind her bitterness? How do you think the war further influenced those factors and her relationship with Julian?

12. At the start of the book, Bertie believes to marry would mean losing her independence, and asks, “Was there not more in life to be excited by than babies?” By the end, she is engaged to Julian and eagerly awaiting her own baby. How do you think the events of the book influence her change of heart? How has she retained her independence and freedom? Do you believe she made the right decision?

13. Take another look at the quote at the front of the book. Why do you think the author chose to include this particular quote? In what ways does art “repair the damages” that have been inflicted in the lives of these people? Has art (whether that be books, films, paintings, etc.) ever done this in your life? Provide examples.
Learn More About At Summer’s End
print

The King at the Edge of the World

In Royal Service to the Queen

The Red Daughter
Back to Top