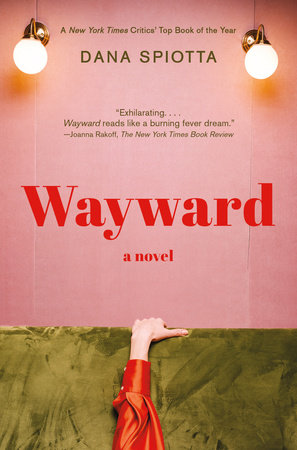 1. Now that you’ve read the book, look at the epigraph by Mary Ruefle again. How does it relate to our main character, Sam? How do you relate to it?

2. Before we even meet Sam, we’re introduced to the Arts and Crafts house that she buys. How did you think this house would be important at the start of the book? How did you feel about the house at the end?

3. Early in the novel, we learn that Sam likes to imagine herself as “subtly different” from everyone else, “ordinary on the surface” but possessing a “radical, original interior life” (page 7). In what ways is Sam ordinary? In what ways is she different from those around her? Think about your own interior life—do you think it matches how you seem on the surface? If not, how does it differ?

4. Sam impulsively buys the Arts and Crafts house she falls in love with. What did you think of her decision? Have you ever made a decision of consequence that changed your life the way that Sam’s decision changes hers?

5. When Sam leaves her husband, Matt, he thinks it’s because of the 2016 presidential election. Spiotta then moves us back in time and we see Sam’s reaction to the election and her attempts to find a politically active community. Do you think that Matt is right about why Sam left their marriage? Why or why not?

7. Perimenopause plays a large role in Sam’s life over the course of the novel. Have you ever read a book in which perimenopause and menopause are discussed frankly as having an effect on a main character? How did you feel about Spiotta exploring this particular time in Sam’s life?

8. Sam cares a lot about Syracuse’s history, especially its architectural history. What do you know about the history of where you live? If you don’t know very much about it, try looking it up on Wikipedia or on your local town or city website!

9. Ally wants nothing to do with her mother after Sam leaves, and becomes preoccupied with a secret relationship with her mentor, Joe.  Why does Ally fall under Joe’s sway? What did you think of Ally’s point of view, and how did it change how you viewed Sam? How are Ally and young Clara connected in their vulnerability and disenchantment?

10. Sam’s mother, Lily, lives alone and, separately, both Ally and Sam seek solace there. What does Lily’s home represent for Ally and Sam? Why does it bring them comfort? Where do you go when you need comfort?

11. MH, Sam’s friend, is always engaged in “optimizing” her body via diet, technology, or specific routines. Sam wonders what it’s all for. Why do you think MH is always working on “bettering” her body? How is Sam’s approach to her own body different?

12. After Sam witnesses the shooting of a Black boy by Syracuse police, she has to face her own impotence, realizing that there’s nothing she can do to fix this particular act of violence. How do you think this event changed Sam?

13. Readers learn about Clara Loomis both from the tours that Sam gives at the Clara Loomis House and from Loomis’s own writing late in the novel. What about Clara Loomis did you like? What bothered you about her? What do you think about Sam’s attempt to recognize Loomis’s positive as well as negative contributions to the world?

14. Sam’s house, where she begins a new life, overlooks a cemetery, which is a place of death. Where else in the novel do you see life and death reflecting each other, or existing in close proximity to each other?

15. When the novel ends, we don’t know what Sam and her family will do next. What do you think is going to happen? Will Sam and Matt get back together? Is Ally and Sam’s relationship different now from the way it was at the start?

Happy and You Know It

The House of Deep Water
Back to Top