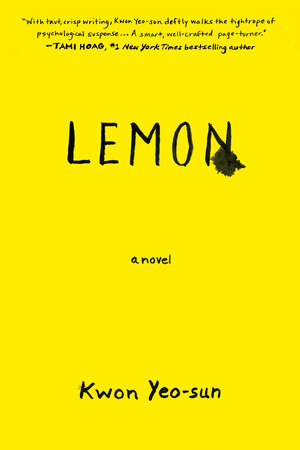 Parasite meets The Good Son in this piercing psychological portrait of three women haunted by a brutal, unsolved crime.

In the summer of 2002, when Korea is abuzz over hosting the FIFA World Cup, eighteen-year-old Kim Hae-on is killed in what becomes known as the High School Beauty Murder. Two suspects quickly emerge: rich kid Shin Jeongjun, whose car Hae-on was last seen in, and delivery boy Han Manu, who witnessed her there just a few hours before her death. But when Jeongjun’s alibi checks out, and no evidence can be pinned on Manu, the case goes cold.

Seventeen years pass without any resolution for those close to Hae-on, and the grief and uncertainty take a cruel toll on her younger sister, Da-on, in particular. Unable to move on with her life, Da-on tries in her own twisted way to recover some of what she’s lost, ultimately setting out to find the truth of what happened.

Shifting between the perspectives of Da-on and two of Hae-on’s classmates struck in different ways by her otherworldly beauty, Lemon ostensibly takes the shape of a crime novel. But identifying the perpetrator is not the main objective here: Kwon Yeo-sun uses this well-worn form to craft a searing, timely exploration of privilege, jealousy, trauma, and how we live with the wrongs we have endured and inflicted in turn. 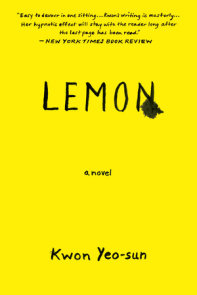 See all books by Kwon Yeo-sun

Kwon Yeo-sun was born in Andong, South Korea, and now lives in Seoul. In 1996 she received the Sangsang Literary Award for her debut novel, Niche of Green. Her subsequent novels and short stories have received numerous literary awards, including the… More about Kwon Yeo-sun

“Lemon is easy to devour in one sitting, but…should be read slowly and closely in order to appreciate it when Kwon pulls off what I can describe only as a sleight of hand…Kwon’s writing is masterly. Her sentences are crisp, concise, and potent; just one contains as much meaning as two or three of your average storyteller’s…Her hypnotic effect will stay with the reader long after the last page has been read. You’ll wish there were more; but you’ll be grateful it ended as it did…a bright, intense, refreshing story.” —Oyinkan Braithwaite, New York Times Book Review

“An idiosyncratic and beguiling mystery…Lemon surveys the damage wrought by a single heinous act on a number of interconnected lives, and does so with impressive deftness.” —The Spectator

“Kwon is masterful at maintaining a low level of doubt…Hong’s translation is spare, lyrical…This narrative style mimics that of the whodunnit, dropping clues and red herrings along the way, but there are other, more compelling, mysteries we’re trying to solve…[a] shrewd diagnosis of a culture that disempowers women—commodifying and consuming them, one after another, until their appeal wears out.” —Vulture

“A deftly written exploration of life and death, grief, revenge, and acceptance of the unknown, all cloaked in an engaging murder mystery.” —Ms. Magazine, Most Anticipated Reads

“Lemon stands among the best in the growing body of translated Korean thrillers…The novel carefully positions the central crime within a larger context of class and competition. The complexity of the story betrays its small size, but the driving narrative makes it difficult not to read in one sitting.” —CrimeReads, Most Anticipated Books of the Year

“Through skillful, emotional prose, [Lemon] offers tantalizing hints about the truth without giving away all of its secrets…a haunting novel about women trapped in an endless cycle of trauma and grief.” —Foreword Reviews (starred review)

“Kwon’s powerful English-language debut explores issues of jealousy, loss, and physical beauty…Those ready to sink into a creepy and intense yet understated emotional experience will find that this story hits and sticks.” —Publishers Weekly

“[A] crime novel about privilege and trauma. Salacious and deep!” —Nylon

“With taut, steely prose, Kwon burrows into the details surrounding the shocking murder of a beautiful girl. Though Lemon takes the form of a mystery and there’s psychological suspense that will grip you all the way to the end, it isn’t just a whodunnit. Hidden on every page are explorations of grief and guilt, how one should go on after a tragedy. It jolts with its brilliance and tartness. It’s simply electric.” —Kyung-sook Shin, author of Please Look After Mom and I’ll Be Right There

“A confounding masterpiece, Lemon is a meditation on grief, death, beauty, God, and art, wrapped in the mourning clothes of a murder mystery. One of the most profound page-turners you will ever encounter, and the first English translation of a major Korean author who should be on everyone’s radar.” —Matthew Salesses, author of Craft in the Real World

“Chilling, suspenseful, and disconcerting. A story of taking things into one’s own hands, when driven to despair by injustice and grief. I couldn’t put it down and read deep into the night until I finished it, with my heart hammering.” —Frances Cha, author of If I Had Your Face

“Lemon opens with the death of a high school student but Kwon Yeo-sun quickly cracks open the secret rivalries between teenage girls to reveal an unending silent scream of loneliness, cruelty, and nihilism that goes on to permeate their adult lives. What a jet-black switchblade of a book!” —Sandi Tan, director of Shirkers and author of Lurkers

“Kwon Yeo-sun’s Lemon is a gripping mystery with an eccentric and thought-provoking edge. It’s quite the unputdownable read!” —June Hur, author of The Silence of Bones and The Forest of Stolen Girls

“I found this book charming, beguiling, and unique. At the heart of this ‘mystery’ is a poetic meditation on grief, guilt, and the meaning of life. In the end, Lemon, like a great painting, makes you see the world differently.” —Patrick Hoffman, author of Clean Hands and Every Man a Menace

“Lemon is a chilling yet deeply moving story about grief, trauma, life, death, and the shattered pieces left behind by those who are gone. The humanity of Kwon’s characters will break your heart on every page.” —An Yu, author of Braised Pork

“Lemon is a deliciously rewarding novel that delves into assumptions about power, wealth, beauty, love, ability, and right to compensation. How well do we know each other? How do we move on from violent loss? I’m in awe of Kwon’s gorgeous prose and intricately crafted mystery at the heart of this elegant thriller.” —Jimin Han, author of A Small Revolution

“[Lemon] delves into the grief of having lost a family member, while retaining all the essential elements of a page-turning whodunnit.” —Chosun Ilbo

“[A story of revenge that takes you down] an unexpected road…with an engaging plot…that packs in a lot more than a personal vendetta, such as the meaning of life and death, and fury at a biased, partial society.” —Hankyure21