Through the Children’s Gate Reader’s Guide 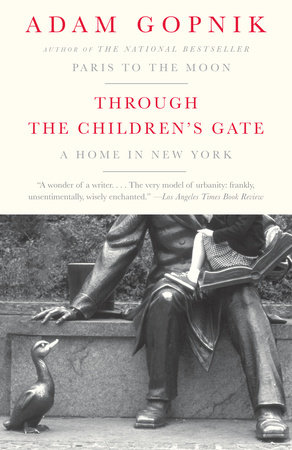 Through the Children’s Gate Reader’s Guide

The introduction, discussion questions, suggestions for further reading, and author biography that follow are designed to enhance your group’s conversation about Through the Children’s Gate, Adam Gopnik’s series of essays about returning to New York to make a home with his family.

After five years in Paris, which Adam Gopnik chronicled in his bestselling Paris to the Moon, he returns with his wife and two small children to Manhattan in the fall of 2000. The city is greatly changed: gone are the crack addicts, the drug dealers in the parks, the general seediness. Instead, people are pushing strollers, Starbucks and other chain stores have moved in, and everything seems safe and prosperous. But 9/11 changed everything once again, and Gopnik registers precisely how that event altered the peculiar rhythms of everyday life and consciousness in the world’s greatest city.

In a series of lighthearted and incisive essays, Gopnik writes about his children and their ever-changing obsessions, about the extraordinary gift of parenthood, and also about many uniquely New York phenomena–like the travails of apartment-hunting, the decline and fall of the great department store, the feral parakeets of Flatbush, electronic switch hotels, the etiquette of taxi-hailing, restaurant chefs and their greenmarket choices, beat cops and their justifiable need for donuts, Jewish jokes, sidewalk life, and much more.

Written in the tradition of E. B. White and J. D. Salinger, these essays convey Gopnik’s signature mix of mind and heart, an elegant sensibility exultantly alert to the minute miracles that bring a place to life. Through the Children’s Gate is a chronicle, by turns tender and hilarious, of a family taking root in the unlikeliest patch of earth.

2. “Manners matter,” Gopnik writes. “These are stories about the manners, the children, and the objects of the professional classes in what was and remains the world’s real capital, in a time of generalized panic and particularized pleasures, about the secular rituals of material but not unmindful people, a handful of manners pressed between the pages of a book” [p. 21]. In what way does he mean “manners matter,” and how are New York manners different from those of other places in the time period of which he writes?

3. Gopnik calls himself a “comic writer” in his introduction [p. 21]. Is this an accurate assessment of his sensibility? Which essay, for you, best expresses the particular character of his sense of humor, and how does it do so?

5. In “Man Goes to See a Doctor,” Dr. Grosskurth tells the author that his professional anxieties and arguments are of little importance because “No one cares! People have troubles of their own!” [p. 44]. How useful is this advice? What elements contribute to the considerable humor and pathos of this story?

6. “The art of child rearing,” Gopnik writes, “is to center the children and then knock them off center; to make them believe that they are safely anchored in the middle of a secure world and somehow also to let them know that the world they live in is not a fixed sphere with them at the center; that they stand instead alongside a river of history, of older souls, that rushes by them, where they are only a single, small incident” [p. 87]. What is most useful or agreeable about this approach to child rearing?

7. Gopnik calls the genre in which he writes “the humane-liberal essay” and elsewhere, “the comic-sentimental essay. . .a kind of antimemoir, a nonconfession confession, whose point is not to strip experience bare but to use experience for some other purpose: to draw a moral or construct an argument, make a case or just tell a joke” [pp. 20, 186]. Discuss what Gopnik means by these terms as exemplified in your favorite essays in Through the Children’s Gate.

8. In “The City and the Pillars,” Gopnik writes, “More than any other city, New York exists at once as a city of symbols and associations, literary and artistic, and as a city of real things” [p. 122]. How does it compare in this sense with other cities, like London, Istanbul, Rome, Chicago, San Francisco? What effect did 9/11 and its extended impact have on Gopnik’s experience of the “real city” of New York
[p. 123]?

9. In “Urban Renewal,” Gopnik discusses W. H. Auden’s poem “September 1, 1939,” referring to its prescience in the context of 9/11. Read the complete poem here, and discuss Gopnik’s idea that the poem suggests we should “follow our authentic self-interest, which means being in touch with the reality of what is and is not actually possible in the world” [p. 130].

10. Is Gopnik’s sister Alison, a developmental psychologist, correct in counseling her brother that, if Olivia’s imaginary friend Charlie Ravioli is not only too busy to play with her, but also has an assistant to whom she has to speak, he should move his family out of New York [p. 163]? What is most funny, and what is most disturbing, about this story?

11. “Memorable description depends on startling metaphors,” Gopnik writes [p. 166]. In thinking about Gopnik’s own style, examine a couple of sentences in which he uses particularly startling metaphors. Or you might comment on the following sentence from “The Cooking Game”: “Cooks, I learned, indulge the gaping outsider–I want to run away with the circus!–without even trying to explain to him what they know too well, that the tricks are easy; the hard part is preventing the clowns from committing suicide and the lion trainer from getting into bed with the ringmaster’s wife” [p. 172]. To what does this extended metaphor refer? How effective is it? Why is it funny as well as accurate?

12. Gopnik reflects on the time after 9/11, “A Steinbergian drawing of New York in these years would show eight million people, each person standing on a pole above an abyss of anxiety. . .” [p. 190]. How accurate are his observations about fear and anxiety and his idea that “structures of delusional domesticity” are a New Yorker’s way of coping with fear [p. 194]? Taken as a whole, is Through the Children’s Gate a hopeful book?

13. In “Fourth Thanksgiving: Propensities,” Gopnik comments, as a parent, on the difficulty created by the ubiquitous “screens” that dominate children’s lives today–the computer, the television, the iPod, the cell phone, and so on [p. 235]. What does he think about the effects of electronic media on the inner lives of children?

14. Kirk Varnedoe is the hero of the book. What is most extraordinary about Varnedoe’s character as revealed in “Last of the Metrozoids”? What is the gift that the boys on the football team are most likely to take away from the experience of having known him?

15. Gopnik discusses the significance of the  “secular ritual” in modern life [p. 287]. How does Thanksgiving function for him, and for this book, as a ritual? What do you notice about the four Thanksgiving essays? Do they create their own kind of narrative and meaning as the book progresses?

16. If you have read Paris to the Moon, how has New York changed Gopnik’s thinking about everyday life? What might have been different had he decided to stay in Paris to raise his children?

17. Gopnik’s own aspiration, with regard to New York, is contained in his early desire and determination to write for The New Yorker, which represents the ideal of New York sophistication to reading audiences. If you have read some of these essays in The New Yorker, do they take on a different feeling here? Can you locate a storyline or structure in the order of the essays in the book, and if so, how does it affect your reading?

Adam Gopnik has been writing for The New Yorker since 1986, and his work for the magazine has won him the National Magazine Award for Essay and Criticism as well as the George Polk Award for Magazine Reporting. He broadcasts regularly for the Canadian Broadcasting Corporation, and is the author of the article on the culture of the United States in the last two editions of the Encyclopedia Britannica. From 1995 to 2000, Gopnik lived in Paris. He now lives in New York with his wife, Martha Parker, and their two children, Luke and Olivia.

A Ticket to the Circus
Norris Church Mailer

All of Me
Anne Murray and Michael Posner

Song for My Fathers
Tom Sancton

The Closer We Are to Dying
Joe Fiorito

The Story of Chicago May
Nuala O’Faolain

I Celebrate Myself
Bill Morgan

A Cab at the Door & Midnight Oil
V. S. Pritchett

Never Look an American in the Eye
Okey Ndibe

All in the Downs
Shirley Collins

This Time, This Place
Jack Valenti