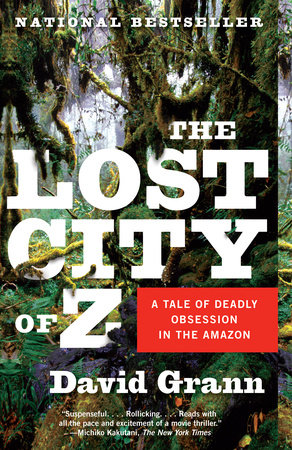 “Suspenseful. . . . Rollicking. . . . Reads with all the pace and excitement of a movie thriller” —The New York Times

The introduction, questions, and suggestions for further reading that follow are designed to enhance your group’s discussion of David Grann’s gripping account of the mysterious disappearance of Great Britain’s last great gentleman explorer, Percy Harrison Fawcett.

A harrowing tale of obsession played out in the deadly jungles of the Amazon, The Lost City of Z tells the story of England’s last great amateur explorer. “Armed with little more than a machete, a compass and an almost divine sense of purpose,” Percy Harrison Fawcett hacked his way deep into the Amazon, exploring places where no white man had ever been and emerging “with maps of regions from which no previous expedition had returned” [p. 8].

David Grann, a staff writer for The New Yorker, becomes intrigued after stumbling on a reference to Fawcett while researching another story. Hardly an adventurer himself, Grann is nevertheless drawn to follow Fawcett’s trail into the jungle, even while knowing that as many as 100 “Fawcett freaks” had perished in similar efforts, and that thousands had died seeking what Fawcett sought, an ancient civilization, the lost city of Eldorado. He leaves his wife and one-year-old son in Brooklyn, takes out an extra life insurance policy on himself, and sets forth to uncover what happened to Fawcett.

Part biography, part detective story, and part adventure tale, The Lost City of Z recreates the great age of exploration that included Ernest Shakleton’s journey to the South Pole, Hiram Bingham’s discovery of Machu Picchu, and David Livingstone’s discovery of Victoria Falls. What makes Fawcett’s story in many ways more intriguing that his more famous counterparts is that Fawcett’s fate remains uncertain. In 1925, he undertook his last expedition, with his 18 year-old son Jack and Raleigh Rimmell, Jack’s best friend. The party never returned and questions abound about what happened to them. Were they murdered by hostile Indians? Did they starve to death? Did they “go native” and willingly remain in the jungle? Or were they killed by the Amazon’s ravenous creatures: crocodiles, jaguars, piranhas, vampire bats, pit vipers, giant anacondas, malarial mosquitoes, poisonous millipedes, flesh-eating bees, and many others.

This mystery sinks its teeth into Grann and he finds himself obsessed with Fawcett’s obsessive seeking. And it is this doubleness—the story of Grann’s journalistic journey interwoven with Fawcett’s desperate search for “Z”—that makes the book so engaging. Readers see precisely how Grann goes about the daunting task of bringing back the story that has eluded so many others. Because the book is so open-ended, offering no definitive answers to what happened to Fawcett or to whether or not there really was an Eldorado, readers are similarly invited to participate in unraveling the mystery, sifting the evidence, considering the world-views of the characters in the book, and examining the depths of the Amazon jungle from the safety of their armchairs.

But perhaps the book’s most significant achievement is its portrait of Fawcett himself. He emerges from these pages not merely as the one-dimensional larger than life heroic explorer of the Amazon, nor as the obsessively driven crackpot many thought him to be. Instead, Grann shows us the full complexity of a man who possessed truly remarkable physical powers of strength and endurance but also took poetry into the jungle; a man who made many important contributions the science of geography but who also became a Buddhist and dabbled in spiritualism; a man who could be brutal towards members of his expeditions he perceived as weak but who was also uncommonly kind to the Indians he encountered; a man who could not entirely escape the prejudices of his era but who nevertheless understood the Amazon better than any of his contemporaries.

As fast paced as any thriller, The Lost City of Z offers an unforgettable exploration of an era, of one the most intriguing characters of that era, and of a region whose secrets are still to be revealed.

1. Books about explorers, adventurers, and extreme risk-takers like Jon Krakauer’s Eiger Dreams and Into the Wild, Caroline Alexander’s The Endurance, Joe Simpson’s Touching the Void, Nathaniel Philbrick’s In the Heart of the Sea, Sebastian Junger’s A Perfect Storm, and many others, have become extremely popular in recent years. What are the appeals of such books? What qualities does The Lost City of Z share with books of this kind? In what ways does it differ from them?

2. After time away from the jungle, Fawcett wrote: “Inexplicably—amazingly—I knew I loved that hell. Its fiendish grasp had captured me, and I wanted to see it again” [p. 116]. What drove Fawcett to plunge himself again and again into the dangers of the Amazon? What is the main force that drives him—obsession with finding the lost city, desire to prove himself against his competitors, a need to escape the confines of civilization, a spiritual quest?

3. In what ways is Fawcett a symbolic figure? What values does he embody? In what ways does he represent many of both the best and worst qualities of the British Empire?

4. Grann notes that some anthropologists and historians consider Fawcett’s view of the Indians enlightened for his era while others saw him as unable to transcend the prevailing racism of his own culture. How does he regard the Indians he encounters? How does he treat them?

5. How do Fawcett’s expeditions affect his wife Nina? How does she see her role in relation to him? In what ways does she succumb to his obsessions?

6. In what ways does The Lost City of Z challenge conventional views of the Amazon? What does it suggest about the current state of archeological research in the region?

7. What are some of the most fascinating and/or dreadful features of the Amazon jungle revealed in The Lost City of Z? How has the jungle been changed since Europeans first made contact with it?

8. What does The Lost City of Z reveal about the power of obsession? In what ways does Fawcett’s obsession draw others into its deadly gravitational pull?

9. By what means does Grann maintain such a high level of suspense throughout the book? What does the interweaving of his own story—the story of his search for the truth about what happened to Fawcett and the story of his writing of the book itself—add to the total effect of The Lost City of Z?

10. After witnessing the mass carnage of World War I, Fawcett exclaims: “Civilization! Ye gods! To see what one has seen the word is an absurdity. It has been an insane explosion of the lowest human emotions” [p. 189]. In what ways does The Lost City of Z call into question conventional notions of civilization? What does it suggest about the supposed differences between advanced and primitive cultures?

11. What are Percy Harrison’s Fawcett’s most admirable qualities? What aspects of his character prove most troubling? Was James Murray right in accusing Fawcett of all but murdering him? [p. 139].

12. Near the end of the book, Grann writes about how biographers are often driven mad by the inability to fully comprehend their subjects. Of his own quest he says: “The finished story of Fawcett seemed to reside eternally beyond the horizon: a hidden metropolis of words and paragraphs, my own Z” [p. 303]. How well does Grann succeed in discovering and revealing the truth of Percy Fawcett?

13. Does Grann’s meeting with the anthropologist Michael Heckenberger in Kurikulo village confirm Fawcett’s belief in a lost ancient civilization? Is Fawcett’s search vindicated at last?

David Grann has been a staff writer at The New Yorker since 2003. He has written about everything from New York City’s antiquated water tunnels to the Aryan Brotherhood prison gang, from the hunt for the giant squid to the mysterious death of the world’s greatest Sherlock Holmes expert. His stories have appeared in several anthologies, and he has written for The New York Times Magazine, The Atlantic, The Washington Post, The Wall Street Journal, and The New Republic, where he is also a contributing editor.

The River of Doubt

Shadow Divers
Back to Top