The Other Reader’s Guide 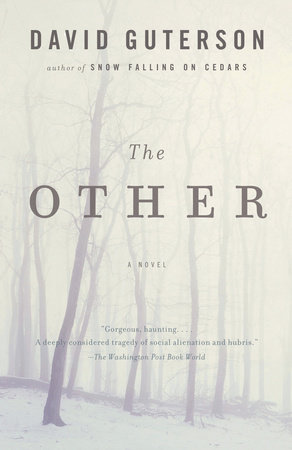 The Other Reader’s Guide

print
The Other Reader’s Guide

The introduction, questions, and suggestions for further reading that follow are intended to enhance your group’s discussion of David Guterson’s The Other. The story of a young man who chooses to live in isolation in Washington State’s Cascade Mountains—told by his closest friend—it is a moving exploration of the clash between personal ideals and moral responsibility, the demands of friendship and the price of honoring them.

Neil Countryman, the son of a carpenter, is a high school English teacher, a happily married father of two, and an aspiring writer. As a teenager, he hiked the uncharted wilderness of the North Cascades with his friend, John William Barry, an affluent descendant of Seattle’s founding families. Fueled by bravado and adolescent idealism, John William held forth on everything—from mountaineering lore to society’s failings to metaphysics. After a couple of semesters at Reed College, John William engineers his own disappearance, retreating to a primitive camp high in the mountains. For seven years, Neil is his only contact with the outside world. When John William’s long strange odyssey comes to a tragic end, Neil must deal with the meaning of his friend’s life and its profound impact on his own.

1. Neil describes John William at sixteen as “the rich kid who hates and loves himself equally. The contrarian who hears his conscience calling in the same way schizophrenics hear voices, so that, for him, there’s no not listening” [p. 10]. Have you encountered people like John William in your own life? In literature? What makes him a believable character, rather than a stereotype?

2. Does Neil also represent a familiar type or character? What makes him interesting or appealing to you? To John William? What distinctive characteristics (strengths and flaws alike) inform the way he tells John William’s story? Consider the qualities that Neil admires in John William in contrast to how he describes himself.

3. Neil and John William are brought together by their love of the outdoors and in particular for hiking in unmapped areas. Does John William spur Neil to take risks he otherwise would avoid? What aspects of their feelings about risk come to light when they get lost in the forest [pp. 29-34]? In what ways do their attitudes about the adventure echo their feelings about their lives in general?

4. To what extent do John William’s activities at Reed [pp. 70-83] as well as his decision to drop out of college reflect the cultural and social milieu of the 1970s? Does Cindy’s rejection of him mark a significant turning point for John William, or does it simply reinforce his perceptions of the world?

5. How does his upbringing affect John William? Would he have turned out differently if Ginnie had remained with the family? Does her decision to leave make her the villain of the story? Are there aspects of her conduct that evoke your empathy or sympathy? Is Rand oblivious or indifferent to his son’s problems or is he incapable of dealing with them? How do Neil’s portraits of them change and deepen as the novel unfolds? Does he become more accepting of the Barrys’ flaws, and if so, why?

6. Throughout The Other, there are references to gnosticism, a philosophical and religious movement that emerged during the early Christian era. A central theme of its teaching is that the world is imperfect, but each of us has a divine spark within that can ultimately free us from the evils of the material world. Does John William’s obsession with gnosticism enhance your understanding of his motivations and behavior? What other references to literature and philosophy in the novel illuminate the themes Guterson is exploring? Discuss, for example, the references to Emily Dickinson and Thoreau [p. 86], to Robert Frost [passim], and to Rudyard Kipling’s “The Miracle of Purun Bhagat” [p. 167].

7. What effect does Neil achieve by alternating accounts of his own experiences with his reports on John William? How do their encounters as they grow older illustrate Neil’s contention that “in a friendship, you don’t so much change terms as observe terms changing” [p.112]?

8. How do you feel about Neil’s complicity in enabling John William to escape from the real world? What moral imperatives underlie his actions? Is he guilty of betraying the fundamental ethical obligations he has as a member of society?

9. In his course, Nature in Literature, Neil tells his students, “poetry and nature are occasions for introspection, but not necessarily for happiness” [p. 28]. Is John William seduced by a naïve, romantic view of the relationship between man and nature? Is he prepared for life in the wilderness? What does he learn about his strengths and limitations as he struggles with nature’s unpredictable, difficult, and often cruel challenges?

10. Does his flight from civilization bring John William the spiritual purity he is searching for? Could he have found another way to express his antipathy to the hypocrisy he sees in the ordinary world? Do you think that he knowingly set out on a path to self-destruction?

11. Is the relationship between Neil and John William a healthy one? What emotional satisfaction does it provide for each of them? Does Neil’s role in John William’s life influence his behavior as husband, father, and teacher?

13. Neil writes, “In the newspaper reports on the hermit of the Hoh, an abiding derangement is the heart of the matter. That’s wrong” [p. 112]. Does Neil’s account of what happens to John William justify this point of view? Would a more objective observer draw the same conclusion from the evidence Neil provides?

14. How does The Other compare to other accounts, either fiction or nonfiction, about people who have exiled themselves from society? If you have read Into the Wild (or have seen the movie), what similarities do you see between John William and Chris McCandless? Discuss the diverse reasons, either rational or not, a person might have for abandoning a comfortable life for one filled with risk and danger. Discuss how Guterson’s decision to tell such a story in the form of a novel differs from Krakauer’s nonfiction approach.

15. This is a book chiefly about a friendship between two boys, yet in many ways the women they love shape the men they become. What roles do the women in the novel—Neil’s mother, who dies when he is in high school; John William’s mother, who abandons him when he is still a child; Neil’s loving and supportive wife; and John William’s college girlfriend—play in the lives of the two main characters?

16. How does inheriting John William’s money change things for Neil—if it does at all? Do you think that it is inheriting the money that allows Neil to finally devote himself to writing, or is it the chance to get John William’s story off his chest? Would John William want a book written about him? Is Neil exploiting his friend in any way?

David Guterson is the author of the novels Snow Falling on Cedars, East of the Mountains, and Our Lady of the Forest, as well as a story collection, The Country Ahead of Us, the Country Behind. A PEN/Faulkner Award winner, he is a cofounder of Field’s End, an organization for writers in Washington State.

Charles Baxter, The Soul Thief; David James Duncan, The River Why; Jim Harrison, True North; John Knowles, A Separate Peace; Jon Krakauer, Into the Wild; Norman Maclean, A River Runs Through It; Alan Sillitoe, The Loneliness of the Long-Distance Runner; Gary Snyder, The Gary Snyder Reader; Abraham Verghese, The Tennis Partner; Sean Wilsey, Oh the Glory of It All.
Learn More About The Other
print

And Sons
David Gilbert
Back to Top