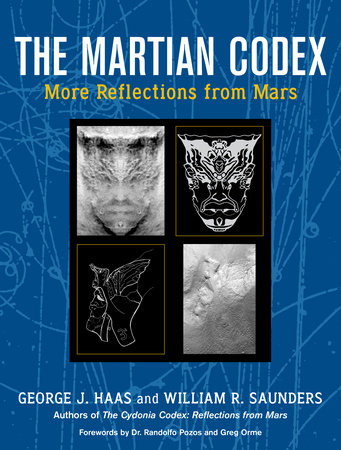 About The Martian Codex

In this provocative book, The Cydonia Codex authors George J. Haas and William R. Saunders use archaeological research discoveries and photographs from NASA and other space programs to document the uncanny similarities between Martian and now-extinct Earth cultures. The Martian Codex begins with a review of the thirty-year history of documenting the famous “Face on Mars” landform from NASA’s first photographs in 1976 to the Mars Reconnaissance Orbiter’s HiRISE shots in 2007. Detailed analysis shows it as a split-faced structure that precisely resembles a set of masks from a temple in Cerros, Mexico.

Part two provides additional examples of two-faced and composite structures all over the red planet. Haas and Saunders explore a series of recurring motifs by providing side-by-side views of the Martian geoglyphs with their terrestrial pre-Columbian counterparts. The results substantiate a commonality between two worlds in that both depict specific gods and characters from the creation mythology of the Mayan people, as recorded in the sacred Popol Vuh. This fact-based book represents the most persuasive argument yet that extraterrestrials may indeed have appeared on Earth during an earlier era.

“Mr. Haas and a small group of dedicated colleagues have pored over other images from the red planet for decades, looking for features that could have been created by intelligent beings. Over the years, among other things, they have seen a face they describe as half-human, half-feline. And a parrot-shaped feature on a mound of rock with ’17 points of anatomical correctness.’ …they are closer than ever to solving the mystery of what has been seen in the skies.”
—Wall Street Journal

“[The Martian Codex] is a real treat… it is a book that absolutely needed to be written. Good job.”
—Marsanomalies.com

“This fact-based book represents the most persuasive argument yet that extraterrestrials may indeed have appeared on Earth during an earlier era.”
—Indiebound