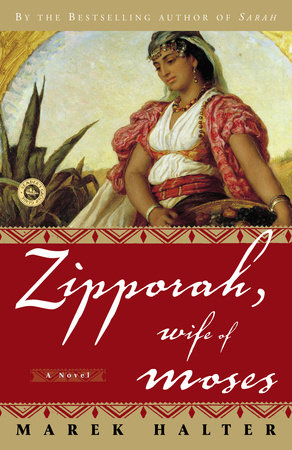 Zipporah, Wife of Moses is bestselling novelist Marek Halter’s latest portrait of a noteworthy woman of the Bible. In a spectacular feat of imagination, Halter has breathed new life into this little-known, though influential, Old Testament figure. Orphaned as an infant, Zipporah is adopted by Jethro, high priest and sage of the Hebrew Midianites, who raises her as his own, despite her black skin. Although she is accepted and adored by his family, as a woman her color keeps the Midianite men at bay. She feels forever an outsider—until one day she meets Moses, himself a fugitive from Pharaoh’s Egypt. Their connection is immediate, and before long, Moses asks Zipporah to be his wife. But her innate wisdom, and the sense of justice instilled by Jethro, are stronger even than her passion for the love of her life: Zipporah refuses to marry Moses until he fulfills his destiny and frees his people from Pharaoh’s brutal slavery.

Bold, independent, and a true survivor, Zipporah is a fascinating heroine, and her world of desert oases, temples, and ancient wonders is a fitting backdrop to an epic tale.

“Marek Halter has not only written a passionate epic, but also revealed the fundamental role that a black woman played in the destiny of the Jewish people . . . Truly captivating.” —Paris Match

This guide is designed to help direct your reading group’s discussion of Marek Halter’s powerful novel.

1. Before reading this novel, how much—or how little—did you know of Zipporah’s story? Read the portions of Exodus pertaining to Zipporah’s story. How has the novel changed your understanding of her importance? Of Moses’ actions?

2. If you haven’t already, read the beautiful excerpt from Song of Solomon on page v. What did this make you expect from the book? What about the other biblical quotations on page v?

3. Discuss how the novel changes your perspective on race relations: How have they changed since biblical times, if at all? Would Zipporah’s experience be any different today?

4. On page 1, Zipporah says, “I have had a dream.” Considering that this is the story of Moses and the Jews’ exodus from slavery, does this strike you as an intentional reference to the famous speech by Dr. Martin Luther King, Jr.? Do you see any other King allusions in the novel, for example to the Promised Land?

5. What is the significance of Zipporah’s dream? In what ways did it come true, and in what ways did its accuracy fail? On page 73, Jethro says to Zipporah, “Live your dream in sleep, but do not let your life become a sleep.” Lacking Zipporah’s influence, do you believe Moses might have done just that?

6. On page 36, Zipporah watches Moses catching fish and sees “a vast shimmer on the sea, much more intense than any of the others, like a wind spreading light as far as the shore.” Several pages later we read, “In the days, weeks, and years that followed, Zipporah was often to remember that moment, a moment she was sure was neither as brief nor as supernatural as it had seemed to her at the time.” In the end, what did this moment mean?

7. When Moses confesses that he has killed a man on page 64, instead of turning him away or being afraid, Jethro invites Moses to tell his story. At this point, Jethro knows virtually nothing about him. What makes Jethro react this way? Is it Zipporah’s influence?

8. Both Moses and Zipporah are adopted by powerful families. Do you believe this shaped their destinies, or were the adoptions themselves preordained?

9. Throughout the novel, various characters are portrayed as storytellers. Do you believe this is how the stories of the Bible were shared initially? Was this how Moses’ story was passed down? If so, how might that explain Zipporah’s minor role in the recorded bible?

10. It seems on pages 120–121 that Moses would be quite content to be a shepherd in Midian with Zipporah as his wife, but Zipporah sees something more in his destiny. She says, “I know you must put on your gold bracelets and go among those who are your people. You must hold back the whip that strikes them.” How does she know this? What gives her the strength to refuse him, even after bearing his children?

11. Why did Jethro allow both Zipporah and Orma to refuse to marry suitable men? If he weren’t a powerful man, would he have been so willing? Discuss the role of women in Midian society and contrast it to Hebrew and Egyptian life.

12. How did Marek Halter’s depiction of the burning bush deepen your understanding of the story?

13. When Moses and Zipporah meet Moses’ family, Miriam’s response to Zipporah is immediately negative, while Yokeved’s is the exact opposite. Why do you think there is such a difference between the sister and the mother?

14. On page 229, Zipporah says, “The Moses they [the Hebrews] need must belong to them more than he belongs to his wife.” Why does she feel this way? Does the same hold true for the wives of today’s leaders?

15. When Miriam shows her scarred body to Zipporah, it changes radically the way Zipporah feels about her own place in the world. Was she right?

16. In his efforts to strengthen Zipporah’s resolve, Jethro says, “The only reason some of [the Hebrews] are still standing, still holding their heads high as men and women should, is because they cling to their own wounds, like a climber clinging to the rocks on Horeb’s mountain.” Are there any groups that you believe are behaving this way today?

17. In Halter’s depiction, Aaron and Miriam turn out to be somewhat treacherous. Is it purely jealousy, or something deeper? How does this jibe with your knowledge of the biblical characters?

18. After Zipporah’s murder, Moses refuses the suggestion of retribution against the Midianites. “What good would that do? What she wanted was trust, respect, and love. Not war. She wanted caresses to beautify the blackness of her skin. How long is it since I last gave them to her? I, too, killed her.” What does Moses mean by this? What has he learned?

19. Reread the last lines of the novel: “Who, though, will remember Zipporah the black woman, the Cushite? Who will remember what she accomplished? Who will still speak her name?” How would you answer those questions? Discuss Zipporah’s legacy.

The Shape of Mercy

The Midwife of St. Petersburg

The Garden of Ruth

The Christ Commission
Back to Top