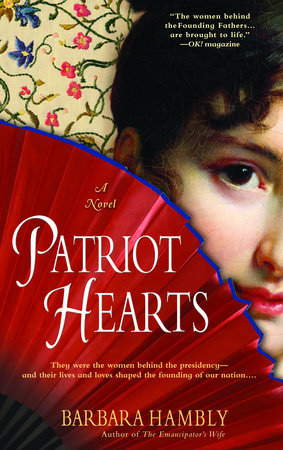 As these four women shape the future of America, their stories spark our imaginations in marvelous new ways. The questions and discussion topics that follow are intended to enhance your reading of Barbara Hambly’s Patriot Hearts. We hope they will enrich your experience of the novel.

1. Discuss the experience of reading historical fiction. What can a novel capture that a documentary or nonfiction book cannot? How does imaginative storytelling enhance our understanding of history?

3. What did it take to earn Martha Washington’s respect (something James Madison had trouble achieving)? How did her previous marriage, and the process of being a grieving mother, shape her view of the world?

4. What do you believe fueled Abigail Adams’s fiery dedication to the Patriot cause? What made her such an ideal match for John?

5. How did you react to the scene of Nabby’s childbirth experience in England? How might the high mortality rates of mothers and newborns have given colonial women an outlook on motherhood that is different from ours?

6. What are your theories about Sally Hemings and Thomas Jefferson? What choices would you have made in her position? How would you explain the many contradictions that existed in his political and personal lives?

7. Would you have been as reluctant as Dolley to marry John Todd? How did she reconcile the obligations of the Quaker community (including abolition and nonviolence) with her fate? How did the spectrum of religious opinions in America shape her life?

8. From their inability to vote to the etiquette that prevented the discussion of politics at a dinner table, the women featured in Patriot Hearts experienced limited options in terms of shaping policy. What was the source of their power? When the author gives Martha Washington the line that “it is the women who actually run things,” what tactics is she referring to?

9. The novel’s epigraph highlights John Adams’s exasperation with his children. What did you discover about early American family life by reading Patriot Hearts? How were stepfamilies managed? Where did the balance of authority between fathers and mothers lie?

10. What were your reactions to the realities of slavery depicted in the novel? What did the novel demonstrate about planters who were reluctant to free their slaves?

11. Were you surprised to discover the high instability that existed in America after the revolution, from currency problems and feuding states to the absence of clear political parties and the creation of unconstitutional acts while the framers were still alive? How did the novel’s creative timeline, woven with flashbacks, enhance your understanding of the turmoil that brewed well into the nineteenth century?

12. Who are the contemporary equivalents of the women featured in Patriot Hearts? How has the notion of a first lady changed since the Federalist period? Would economic empowerment alone have led Martha, Dolley, Abigail, and Sally to make even more daring life choices?

13. Discuss the role of the mirror sent by Marie Antoinette. What are its ominous qualities, in light of the queen’s execution amid revolution? What bridge does it serve between monarchy and democracy? What varying faces does it capture as it is passed through the novel’s inner circle?

14. Which of the women in the novel did you most identify with? If all four women were guests of your book club, what questions would you most want to ask them? What do you think their responses might be?

15. The novel’s epilogue, postscriptum, and cast of characters describe the surprisingly bleak outcomes for many of these luminaries and their descendants. What accounts for these sometimes tremendous gaps between historic achievement and personal failure, in terms of debt or an unrealized dream? Which of these legacies inspired descendants to achieve even greater victories?

16. What threads link Patriot Hearts to Barbara Hambly’s previous novels? What shapes her approach in crafting memorable characters and proposing intriguing “what if” scenarios?

The Handmaid and the Carpenter
Elizabeth Berg

Beside a Burning Sea
John Shors

The Moonlit Cage
Linda Holeman
Back to Top