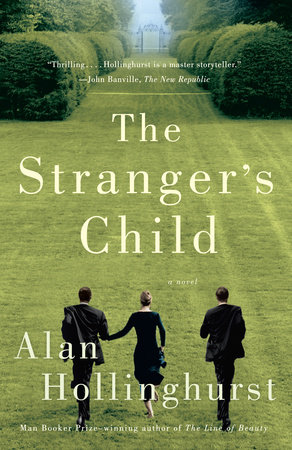 The introduction, questions, and suggested further reading that follow are designed to enhance your group’s discussion of Alan Hollinghurst’s new novel—his follow-up to 2004’s Man Booker Prize–winning The Line of Beauty.

“Brilliantly realized…. Beautifully written, ambitious in its scope and structure, confident in its execution, The Stranger’s Child is a master class in the art of the novel.” —The Times Literary Supplement (London)

Alan Hollinghurst’s stunning new novel is difficult to categorize. It is at once a comedy of manners, a century-spanning epic, a literary mystery, and  the story of the short life and long posthumous reputation of a promising young poet, Cecil Valance. It is also an adroit investigation into the limits of human knowing, the fallibility of memory, and the  way history is made.

Set in five episodes that take place in 1913, 1926, 1967, 1977, and 2008, the novel begins when the handsome, aristocratic Cecil visits the home of his Cambridge friend and lover George Sawle. During his brief stay, Cecil drinks heavily, trashes his room, loudly proclaims his paganism, recites Tennyson and his own poetry, ravishes George in the woods, makes a clumsy pass at George’s sister, Daphne, who falls in love with him, and writes what will become his most famous poem, “Two Acres.” A love poem and an ode to rural England, it appears to be written for Daphne—but in fact was originally inspired by George. The rest of the novel elaborates the seeds planted in this opening pastoral scene, full of prewar serenity, sexual secrecy, and Cecil’s uncanny ability to enchant and beguile, an ability that would long outlast his short life.

That idyllic Edwardian world is soon utterly shattered by war. Cecil is killed in the trenches of World War I, Daphne marries his brother, Dudley, and becomes mistress of Corley Court, and George suppresses his true sexual orientation in a staid, childless marriage. Cecil’s death at age twenty-five only heightens interest in his life and inflates the value of his poetry. Churchill reads his poem to a war-weary nation, and the mythologizing of both poem and poet is already well under way when Sebastian Stokes writes his soft-focus memoir about Cecil. The potential scandal of Cecil’s sexuality is kept carefully hidden, and indeed buried histories and secret lives become a major thematic thread in The Stranger’s Child. Not until Paul Bryant appears and undertakes a properly inquisitive literary biography is the full truth about Cecil explored, and by that time the resulting shock is short-lived, though the book establishes Paul’s literary reputation, without jeopardizing his own secret life.

Swirling around the story of Cecil’s life and legacy, Hollinghurst tells a number of other stories: of the decline of the British Empire and its aristocratic traditions; of the changing attitudes toward homosexuality in English literary culture; of the emergence of modernism, and death of Victorian aesthetics, in art and architecture; of the erosion of English country life under late-twentieth-century urban sprawl; and of the vagaries of literary reputation. On a philosophical level, the novel explores with great acuity the limits of our ability to grasp the truth of another’s life, especially perhaps a writer’s life, long after his death. Hollinghurst’s exquisite fiction about literary biography seems to imply that biography is itself a kind of fiction, relying as it does upon the mixed motives and slippery memories of those who never fully knew the subject in the first place.

But the pleasures of The Stranger’s Child reside as much in its language, and its almost microscopic social nuances—which Hollinghurst describes more vividly and entertainingly than any other novelist writing today—as in its larger concerns. Fortunately, the reader doesn’t have to choose, as the subtle details support and propel the novel’s thematic integrity from the first page to the last.

“A remarkable, unmissable achievement, written with the calm authority of an author who could turn his literary gifts to just about anything…. It is a rare thing to read a novel buoyed up by the certainty that it will stand among the year’s best, but rarer still to become confident of its value in decades to come.” —The Independent (UK)

1. Much of The Stranger’s Child concerns attempts to get at the truth of Cecil Valance. What does the novel as a whole say about our ability to truly know another person? In what ways does it illustrate the limits of our knowing? Do we as readers of the novel know Cecil more accurately than George, Daphne, Dudley—even Sebastian Stokes? What about Paul Bryant?

2. What role does keeping secrets play in the The Stranger’s Child? Why do so many characters feel compelled to lead secret lives?

3. Several characters are said to have had “a bad war,” suffering from what would now be described as post traumatic stress disorder. How has the war affected Dudley Valance and Leslie Keeping in particular? In what ways does World War I cast a shadow over the entire novel?

4. Before her interview with Sebby Stokes for the memoir he’s writing about Cecil, Daphne thinks: “What she felt then; and what she felt now; and what she felt now about what she felt then: it wasn’t remotely easy to say” [p. 141]. Later in the novel, frustrated with Paul’s interview for his biography of the poet, Daphne muses: “He was asking for memories, too young himself to know that memories were only memories of memories” [p. 382]. In what ways does the novel suggest that memory, of both facts and feelings, is an extremely unreliable method of recovering the truth?

5. What is suggested by the divergent attitudes expressed in the novel toward Victorianism, especially as it is embodied in Corley Court? Why does Dudley detest the house so violently? What is the effect of Mrs. Riley’s modernist makeover?

6. How do English attitudes toward homosexuality change over the period the novel covers, from 1913 to 2008? Why is it important, in terms of Cecil Valance’s biography, that the true nature of his sexuality, and the true recipient of his famous poem “Two Acres,” be revealed?

7. What other important generational changes in English life does the novel trace?

8. The Stranger’s Child is, among many other things, a wonderfully comic novel. What are some of its funniest moments and most amusing observations?

9. Cecil Valance is a purely fictional character—though he resembles the World War I poet Rupert Brooke—but he inhabits a milieu in the novel that includes real people: literary scholars Jon Stallworthy and Paul Fussell appear at a party, John Betjeman attends a rally to save St. Pancras Station, and Cecil is said to have known Lytton Strachey and other members of the Bloomsbury group. What is the effect of this mixing of real and fictional characters?

10. Near the end of the novel, Jennifer Keeping tells Rob that Paul Bryant’s story of his father’s heroic death in World War II is a fiction, that in fact Paul was a bastard. For Rob, this revelation makes Paul “if anything more intriguing and sympathetic” [p. 422]. Do you agree with Rob—is Paul a sympathetic character? How does Paul’s own secret past shed light on his motivations and tactics as a biographer?

11. In what ways does A Stranger’s Child critique English manners and morals? In what ways might it be said to celebrate them—if at all?

12. The novel is filled with remarkable subtleties of perception. After Cecil leaves “Two Acres,” Daphne thinks: “Of course he had gone! There was a thinness in the air that told her, in the tone of the morning, the texture of the servants’ movements and fragments of talk” [p. 75]. Where else does this kind of finely attuned awareness appear in the novel? What do such descriptions add to the experience of reading of The Stranger’s Child?

13. The novel opens with George, Daphne, and Cecil reciting Tennyson’s poetry on the lawn of “Two Acres” and ends with Rob viewing a video clip of a digitally animated photograph (on the website Poets Alive! Houndvoice.com) that makes it appear as if Tennyson is reading his poetry [p. 424]. What is Hollinghurst suggesting by bookending his novel in this way?

14. What does the novel say about how literary reputations are created, preserved, revised?

15. Why do you think Hollinghurst ends the novel with Rob’s unsuccessful attempt to recover Cecil’s letters to Hewitt before they go up in smoke? Is this conclusion satisfying, or appropriately open-ended?

Alan Hollinghurst was born in 1954. He is the author of one of the most highly praised first novels to appear in the 1980s, The Swimming-Pool Library, and was selected as one of the Best of Young British Novelists 1993. His second novel, The Folding Star, won the James Tait Black Memorial Prize and was shortlisted for the 1994 Booker Prize.  In 2004 he won the Man Booker Prize for The Line of Beauty. He was on the staff of the Times Literary Supplement from 1982 to 1995.
Learn More About The Stranger’s Child
print