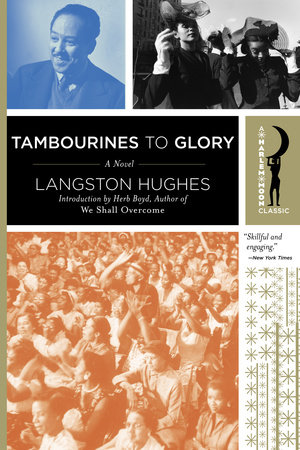 1. Langston Hughes originally wrote Tambourines to Glory as a play. If you were to direct a theatrical production of Tambourines, what elements of direction, scenery, and score would you use to dramatize characters and scenes in the
narrative?

2. As she is depicted in the beginning of Tambourines to Glory, would you describe Laura Reed as amoral or immoral?

3. Essie Johnson is portrayed as a humble, pious, and earnest woman. Laura Reed, on the other hand, is hedonistic, selfish, and conniving. How effective are Laura and Essie as foils for each other? Is the stark contrast between the two women effective in elucidating each character? Do these portrayals seem realistic or allegorical?

4. If Essie worships a trinity of the Father, the Son, and the Holy Spirit, what trinity does Laura worship? What are her acts of worship?

5. Discuss how Laura appropriates and uses the language of the gospel to support her secret agenda and to defend her behavior.

6. Despite her deceitful nature, Laura positively affects the spiritual lives of members of her congregation. Does the moral deficiency of the messenger necessarily detract from the message? Explain.

7. Though Essie is portrayed as generally moral and good, she is not without fault and not without blame. What is Essie’s sin? Of what is she guilty? Passivity? Idleness?

8. On those occasions when Laura sells bogus holy water to members of the congregation, Essie withdraws from what is going on and meditates. Hughes writes, “Essie’s life had been full of long, long, very long pauses” (page 16). What happens when Essie goes into “pause” mode? Do you think her pause is a show of commendable patience and long suffering? Or is it evidence of passivity and listlessness? How can a “pause” mode be a psychological defense mechanism?

9. Does Laura’s humor and wit ever soften the harshness of her bad deeds? Did you find Laura to be likable despite her evildoing?

10. How does the frequent incorporation of gospel lyrics in Tambourines to Glory shape or affect the narrative?

11. In the opening of Tambourines to Glory, the women exchange stories about their mothers. Neither woman mentions a father, nor does Essie ever reference her daughter Marietta’s father. What significance does the omission of fathers have for the story?

12. Marty is a puppet master of sorts. He is a powerful and well-connected criminal who pulls strings, coerces, and manipulates from behind the scenes – and he is white. What is the effect of having Marty never actually appear in the story? What does Hughes’s second – and thirdhand depiction of Marty – the most significant white character in the story – suggest about the role and function of whites in this largely segregated black community? How are white people generally
depicted in (or excluded from) Tambourines to Glory?

13. How does Buddy transform Laura? Accordingly, how does the introduction of Buddy into the text change the course
and tone of the story?

14. In what ways does Hughes romanticize and glamorize black life in Harlem? In what ways is he critical of it?

The Art of Losing Yourself
Katie Ganshert

I Shall Not Be Moved
Maya Angelou

I’ll Be Seeing You
Elizabeth Berg

Every Frenchman Has One
Olivia de Havilland

The Mockingbird Next Door
Marja Mills
Back to Top