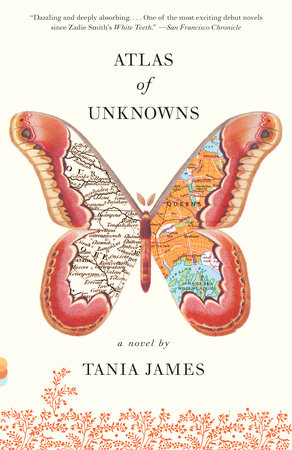 Set in the 1990s, in India and America, Tania James’s Atlas of Unknowns is a poignant, complex, and often vibrantly humorous exploration of one family’s search for wholeness, a search that spans two continents and takes many twists and turns, both cultural and emotional.

Linno and Anju Vallara are growing up motherless and Christian in Kerala, India, raised by their well-meaning father, Melvin, and their fiercely opinionated grandmother Ammachi. The sisters have very different temperaments and talents-Linno is an exceptional artist, despite having lost a hand as a young girl; Anju is highly intelligent and successful academically. When Anju is considered a candidate for a scholarship to study at a private high school in New York, she claims her sister’s artwork as her own-and wins the scholarship on false pretenses. The dream of America is too tempting to let slip away.

Once she is in New York, Anju’s life changes radically. She stays with a wealthy American family of Indian heritage, headed by Mrs. Solanki, a well-known television talk show host. Anju’s daily routine includes navigating the subway system, assimilating to the social structures of an American high school, and befriending an intense and poetic boy named Fish-all the while trying to maintain the precarious illusion of her artistic talent. When her deception is accidentally revealed to the administration, she runs away, cutting off all contact with her family. She seeks shelter with Bird-a former actress whose history with Anju’s deceased mother is unknown to Anju-who gets her a job at a beauty salon in Jackson Heights, Queens.

Back in India, Linno is considering the possible benefits of marriage to a sophisticated and wealthy blind man, Kuku, as arranged by her father. Ultimately deciding against this union, she throws herself into a burgeoning career as a designer of invitation cards, hoping to attain a level of success that will take her to the United States to find her sister. Both Linno and Melvin devise their own strategies to find Anju, even as it seems their contacts in New York have grown discouraged.

Wearied by her work as a bikini waxer and by her fruitless attempts to secure a green card, Anju finally finds a way to return home. A complicated plan devised by Anju and the Solankis enables Linno and Anju to meet again, and they reunite as women who have grown closer as a result of their separation-closer to each other, to the truth about their mother’s past and the devastating circumstances of her death, and to the strength of their own individual voices.

Atlas of Unknowns is a deeply satisfying novel that explores the conflicting and often painful emotions evoked by separating from home, culture, family, the truth of the past, and one’s familiar role. But it explores as well, with deep empathy and insight, the healing made possible by reconciliation. Each character’s individual journey leads to the recognition that they are in fact part of the same whole, bound by love, tethered to the past even as they long for freedom and a new life.

1. What is the significance, both literal and metaphorical, of the novel’s title?

2. What does America symbolize to Anju and her family? In what ways is the influence of the West felt in their small village?

3. In an attempt both to condone and to apologize for Anju’s betrayal, Melvin says, “There is good and there is bad, Linno. And then there is bad for good’s sake” (page 32). Is Melvin right about this? How does Anju justify her betrayal? How can Linno’s inability to confront Anju be explained?

4. How does the Vallara family’s Christian heritage influence the way Ammachi, Melvin, Linno, and Anju make sense of their experiences?

5. The narrator only gradually reveals aspects of Gracie’s personality and the circumstances surrounding her death. How does this serve to build dramatic tension throughout the novel? How does Gracie’s death affect the main characters?

6. As Bird is planning to approach Anju for the first time, she thinks, “Time is but a circle, and a person might run from the past only to find herself faced with it in the end” (page 66). How does the past influence Bird’s present life? In what ways do other characters try to flee from their pasts? Do they succeed, or are they also forced to face the past in some way?

8. How do wealth and fame figure into the narrative? Consider the characters of Mrs. Solanki, Kuku, and Abraham Chandy: What advantages do they possess? What kinds of limitations do they experience, either because of or in spite of their positions?

9. How does Linno view her talent as an artist? What role does the creative process play in her life?

10. Anju observes of the Solankis: “There is no discussion that this family will not touch, no question unposed, no secret kept. Yet for all their honesty, all these freedoms of speech, neither Rohit nor his parents seem to know what to make of one another. . . . Whether this is better or worse than her own family, Anju cannot tell” (page 111). Is the honesty among the Solankis better or worse than the secrecy maintained in Anju’s family?

11. How do women’s desires conflict with the roles they are expected to play in the novel? How does this conflict change over the course of generations, in the lives of Ammachi and her sister; Gracie, Bird, and Mrs. Solanki; Alice, Linno, and Anju?

12. When the sisters are finally reunited, Anju chooses to face Linno away from the cameras. How does this decision reflect a change in Anju’s values? What does Linno’s response say about her own internal transformation? What does this ending reveal about their relationship?

13. What role do prophecy, guilt, confession, and redemption play in the novel?

14. How does the novel illuminate the contentious issues surrounding immigration in a post-9/11 world? What does it say about the cultural differences between contemporary India and America?

Tania James was raised in Louisville, Kentucky, and is a graduate of Harvard and Columbia. She has published her work in One Story and The New York Times. She lives in New York City.