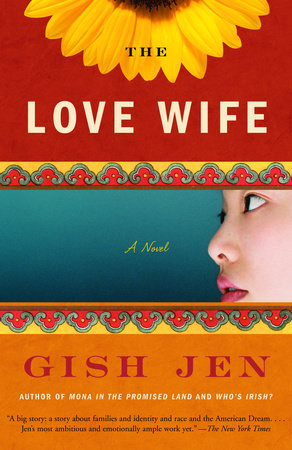 “A big story: a story about families and identity and race and the American Dream. . . . Jen’s most ambitious and emotionally ample work yet.” –The New York Times

The introduction, discussion questions, suggested reading list, and author biography that follow are designed to enhance your group’s reading of Gish Jen’s The Love Wife. We hope they will provide you with interesting ways of talking about this funny, touchingly realistic novel about the new American family by the acclaimed author of Mona in the Promised Land and Who’s Irish?

The Wong family lives in a lovely old farmhouse in a town outside of Boston. Carnegie, a second-generation Chinese American, has a good job at a high-tech company. Blondie, the perfect embodiment of Midwestern farm-girl looks and New England WASP manners, heads up marketing at a socially responsible investment firm. They have two adopted daughters, both of Asian origin–Lizzy, age fifteen, and Wendy, nine–and a thirteen-month-old biological son, Bailey. Carnegie and Blondie see the family as a loving, flexible, and harmonious “improvisation.” For Mama Wong, Carnegie’s strong-willed mother, however, it is ludicrously unnatural. With the sly determination that marked her amazing rise from impoverished immigrant to well-to-do landlord, Mama Wong decides to set things right in her will by arranging for Lan, a distant “relative” from China, to join the family. Despite Carnegie’s assurances that Lan has come only to help with the children, Blondie can’t help but wonder whether the arrangement represents the ultimate step in Mama Wong’s plans for her son.

The Love Wife is a witty, sharp-eyed, compassionate look at a patchwork family and the gradual unraveling of the threads that bind them. In Gish Jen’s deftly crafted narrative, the characters all have their say, reflecting on the past and the present, on the carefully made choices and unforeseen complications that shape the reality of their lives.

1. At the beginning of the novel, Blondie says, “At least I had my family. Every happy family has its innocence. I suppose, looking back, this was ours” [p. 4]. Is her belief in the sanctity of the family shared by the others? In what ways does her upbringing and her position within the Bailey family as “the throwback, a plain Jane who seemed to have no part in certain family games” [p. 70] influence her point of view?

2. How does Mama Wong’s Alzheimer’s affect Carnegie’s feelings about her? In what ways do his reactions offer insights not only into her character but into Carnegie’s as well? Compare his feelings and the way he expresses them with Blondie’s blunter observations about her mother-in-law. Are the differences based purely on their relationship to Mama Wong and her treatment of each of them? How does Jen capture the poignancy, the frustration, and even the humor of dealing with an Alzheimer’s patient?

3. Several decades separate the arrivals of Mama Wong and Lan in America. What insights do their backgrounds provide into the position of women in Chinese society both before and after the Communist takeover? Using Carnegie’s retelling of Mama Wong’s story [p. 30] and Lan’s thoughts as she settles into the household [pp. 39—49] and her description of her life in China [p. 95—102] as a starting point, discuss the ways in which their expectations and their experiences as immigrants differ and what they have in common. What do their comments about life in America bring to light about the changes in this country during that same period?

4. When Mama Wong dies, Carnegie says, “What a large word, ‘mother’; how puny its incorporation. Like the words ‘her family,’ meaning me. It was at times like this that I missed having a father, but not only for myself. I missed my mother having a husband.” [pp. 177—78]. How does this reflection encapsulate Carnegie’s state of mind and his emotional awakening? What impact do his memories of childhood, his mother’s memorabilia, and the discovery of the existence of the family book [pp. 189—193] have on his relationship with Blondie? How does Jen make these changes apparent?

5. Lizzy is in many ways a typical teenager trying to establish her own identity. To what extent does her image of herself as “mixed-up soup du jour” [p. 8] help to explain her almost immediate attachment to Lan? Does Lan take advantage of Lizzy’s confusion in an unfair or calculated way?

6. What does Wendy’s perspective add to our understanding of the family dynamics? What particular passages or incidents show that she, as Lan tells her, “See not only with your eyes but with your heart” [p. 90]? What effect does the fact that she is from China and her origins are clear have on the way she is treated by others and on her sense of identity?

7. Blondie asks herself, “Were we adopting this child [Wendy] for her good or for ours?” [p. 121] What does this imply about parenthood? Is it as relevant to the decision to have a child of one’s own as it is to adopting a child?

8. What is the significance of Blondie’s assertion, “I had always drawn strength from the fact that my hair next to Lizzy’s should be a picture that challenged the heart. Now I drew on it purposefully, the way other women drew on the knowledge that they were intelligent or thin. I had had the heart to take these children in, after all. Had I not loved them deeply and well, as if they were from the beginning my own?” [p. 133] Does her description of Bailey’s birth [p. 156] cast a different light on her feelings?

9. Is Blondie’s uneasiness about Lan’s claims on the children’s affections unusual? What distinguishes Lan’s role in the household from the usual interactions between a family and the people who care for their children? How do Lan’s personality and her judgments [p. 136, for example], as well as Carnegie’s and Blondie’s attitudes, contribute to the ambiguous nature of the relationship?

10. Does Lan’s presence in the household alter Blondie and Carnegie’s marriage in a fundamental way, or does it simply throw into relief differences that existed all along? To what extent is Carnegie’s attraction to Lan [pp. 142—44] attributable to misgivings about his marriage? Is the unraveling of the Wongs’ marriage inevitable, or does it confirm Blondie’s suspicion that Mama Wong “would send us, from her grave, the wife [Carnegie] should have married” [p. 195]?

11. What personal ambitions does Lan bring to the United States? Is her drive and desire to make the most of herself admirable or opportunistic and self-serving? How complicit is she in alienating Blondie from the family? What messages does she convey in the lessons she gives the girls in Chinese language and culture [pp. 203, 215—16, for example]? What do her involvement with Shang [pp. 285—309] and her marriage to Jeb Su reveal about Lan’s priorities?

12. Throughout the novel, Blondie and Gabriela exchange e-mails [pp. 131, 141, 202, 218—19]. What insight do these provide that is missing from Blondie’s longer, more detailed accounts of events? What does this friendship provide Blondie that is lacking in her relationship with Carnegie and with her siblings and father?

13. Why does Blondie’s effort to reclaim her family by becoming a stay-at-home mom ultimately fail? Beyond the practical implications, what is the importance of her decision to move out of the house?

14. The book ends on an ambivalent note. Why are the final words Wendy’s, and how do they relate to the themes of the novel?

15. Each character presents a personal chronicle of the events in their lives, sometimes commenting on or correcting the perceptions of the others. How would you describe the tone of each character’s commentary? For example, what qualities do Carnegie’s portrait of Blondie [pp. 20—21] and his “selected preconceptions, wholly inexcusable” about Lan [p. 12] have in common?

16. How do the juxtaposition of viewpoints and the mixture of tones affect the way the story unfolds and your reactions to the individual characters? Which one, if any, dominates the narrative? Does a particular character stand out as the emotional center of the novel? How might a reader’s own experience, gender, or background influence their sympathies for the various characters?

17. Gish Jen’s previous books–Typical American, Mona in the Promised Land, and Who’s Irish?–established her as a funny and incisive portrayer of the way people of various backgrounds, cultures, and ambitions search for a place for themselves in America. How does The Love Wife extend and add twists to the notion of America as a nation of immigrants? Has the need to assimilate become less important to recent immigrants than it was to past generations or has assimilation become redefined?

Gish Jen grew up in Scarsdale, New York. She is the author of two novels, Mona in the Promised Land and Typical American, and the short story collection Who’s Irish? Her work has appeared in The New Yorker, The Atlantic, and The Best American Short Stories of the Century. She lives in Massachusetts with her husband and two children.

Lucky Boy
Back to Top