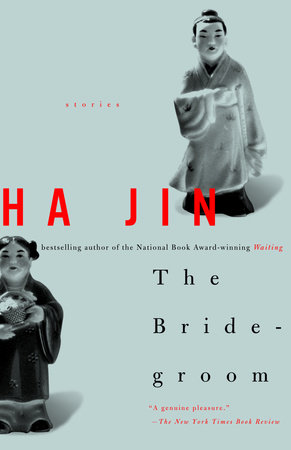 The questions, discussion topics, and author biography that follow are intended to enhance your group’s reading of The Bridegroom, Ha Jin’s latest collection of short fiction.

With these tales—three of which have been selected for inclusion in The Best American Short Stories—he returns to Muji City, the same provincial city in northern China that was the setting of his National Book Award-winning novel Waiting. The stories take place in contemporary times, after the end of the Cultural Revolution, as the repressive years of Maoist reeducation give way to a new and often confusing set of circumstances. China remains an essentially communist nation, but begins cautiously to open itself to individual entrepreneurship in business. With the great majority of people still working in state-owned industries, political situations are inseparable from the details of everyday life. As the characters in these stories struggle to make a living, they cope with government bureaucracy and the occasional intrusion of communist party officials into their domestic affairs.

In the title story a handsome young man marries a homely girl, to the surprise and relief of her guardian. But good fortune gives way to grief when the man is found guilty of the "bourgeois crime" of homosexuality. In "After Cowboy Chicken Came to Town," an American-run fried chicken restaurant creates conflict among its Chinese workers, who find to their dismay that American enterprise has its own set of injustices. And in "Alive," a man who has traveled on business to a distant city is injured in an earthquake, loses his memory, and marries a woman whose family has been killed, only to suddenly remember the family he left behind. When he returns to them, he finds that since he has been presumed dead, he has lost his job and his apartment, and he begins to regret his decision to come home. The stories in The Bridegroom, in all their humor and sadness, are expressions of their author’s unswervingly realistic perspective on human nature and on life in contemporary China.

1. Evaluating the stories in The Bridegroom, one reviewer commented, "Laced with black humor, they refrain from entering fully into the human complexities of their characters: unjust power structures, rather than the individual experiences of his protagonists, are the focus of these tales" [Claire Messud, The New York Times Book Review]. How accurate is this observation? In which stories is human complexity most fully revealed?

Ha Jin was born in 1956 in Liaoning Province in northern China. For six years, beginning at age 14, he served in the People’s Liberation Army. After his military service ended, he taught himself English while working the night shift as a railroad telegrapher. In 1977, when colleges reopened after the Cultural Revolution, he passed the entrance exams and was assigned to study English, although this was his last choice for a major. Ha Jin received B.A. and M.A. degrees in English from Chinese universities, and came to the United States in 1985 to do graduate work at Brandeis University, supporting himself as a busboy in a Chinese restaurant and as a night watchman in a factory. After the Tiananmen Square massacre in 1989, he decided that, as a writer, he could not return to China. In 1993 he earned a Ph.D. in English from Brandeis. He has published two collections of poetry, Between Silences (1990) and Facing Shadows (1996), and two collections of short fiction, Ocean of Words (1996), which received the PEN/Hemingway award, and Under the Red Flag (1997), which won the Flannery O’Connor Award. In the Pond was published in 1998. His novel Waiting won the National Book Award for fiction in 1999, as well as the PEN/Faulkner award. Ha Jin lives in Atlanta, where he is Young J. Allen Professor of English and Creative Writing at Emory University.
Learn More About The Bridegroom
print

There Are Jews in My House

I Sweep the Sun Off Rooftops

All That Is Gone

The Tiger in the Grass

Boy in the Twilight

Good Bones and Simple Murders
Back to Top