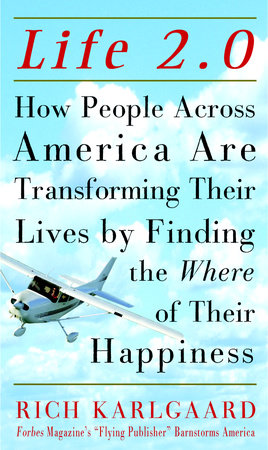 “While counterintuitive to those on the conventional fast-track, Life 2.0 offers great promise to those who are open to personal innovation” — Clayton Christensen, Professor, Harvard Business School

“This fascinating treatise will make you think deeply, and may just give you the impetus to uproot” — Tom Peters

“An original and exhilarating look at options many Americans don’t realize are now open to them.” — James Fallows, national correspondent, The Atlantic Monthly

“Not only will it widen the horizons of your life, it could also renew your health and wealth.” — George Gilder


Have You Found the Where of Your Happiness?

One of the intriguing things about the United States is the idea of the second chance, that when you feel stuck there is always a frontier you can cross to reinvent yourself. In Life 2.0, Rich Karlgaard used his own personal and professional midlife crises to look at the state of the American dream—the belief in continuous personal upward mobility—and where it stands in the twenty-first century.

At the ripe old age of forty-five, Karlgaard fell in love with flying and mastered the art of lifting up and bringing down a “2,500-pound aluminum box kite”—a four-seat single-engine airplane. As the publisher of Forbes he felt that he was doing too much armchair theorizing and didn’t really understand how Americans were responding to the changes that had started taking place so swiftly over the past few years.

So he put together his new flying skills and reportorial mission and flew around America to places like Green Bay, Wisconsin; Bozeman, Montana; Fargo, North Dakota; Des Moines, Iowa; and Lake Placid, New York, to gain some insight into how ordinary Americans are untangling the knotty problems of constant stress, crushing expense, and bewildering hassle that often characterize life in the nation’s urban centers.

He discovered their simple solution: they moved. What Karlgaard found on the road are fascinating and inspiring stories about people— those with a nose for entrepreneurship, a faith in technology, and the willingness to take a chance—who are finding the new American dream in places as far from New York City and Silicon Valley as you can imagine. Some of those people include:

• A burned-out insurance exec who fled his overworked East Coast life and settled in tranquil (yet dynamic) Des Moines
• A tool broker who traded his brick-and-mortar business in sunny California for a life in the Pennsylvania hills, where he relaunched his business on the Internet
• A road-warrior democracy specialist who conducts her worldly affairs from the low-key outpost of Bismarck, North Dakota
• A self-made millionaire who paid for his financial success with his first marriage and who did things differently the second time around by moving to smaller cities and focusing on family as well as work

Adroitly combining analysis of the economic and social trends challenging middle-class people with perceptive advice on how to escape the rat race of the coasts, Karlgaard explores the eye-opening possibilities of that huge tract of land often carelessly dubbed “flyover country.” Filled with stories of personal reinvention and triumph, Life 2.0 is the story of those who are living larger lives in smaller places. 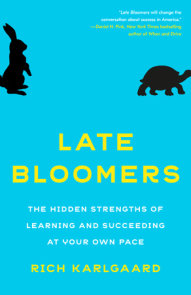 See all books by Rich Karlgaard

Rich Karlgaard is the publisher of Forbes magazine and one of its three editorialists. His column, “Digital Rules,” focuses on the intersection of technology, economics, and public policy. For more information, go to life2where.com.