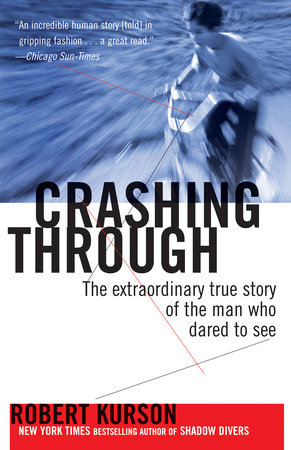 1. Mike has often said that his life story is as much about his mother as it is about himself. Why is this?

2. Do you think you would allow your children to take the risks that Ori Jean allowed Mike to take?

3. Mike complied a big list of reasons to decline new vision. He could list only one reason to go forward: curiosity. Why was curiosity so important to Mike?

4. There came a time when Mike’s struggle with his new vision became so difficult that he nearly destroyed his anti-rejection medication. Why didn’t he simply let his vision go and return to his very full and satisfying life as a blind person?

5. Mike chose not to read about his predecessors in history, all of whom seemed to suffer a profound depression for having dared to see after a lifetime of blindness. Why did he ignore these case histories?

6. How would you describe Mike’s new vision? Is it what he, and the scientists, expected? How is his sight different from traditional sight, and what challenges does his new vision pose?

7. Robert Kurson describes the world Mike sees as similar to a modern abstract painting. How is this so?

8. Describe Mike’s relationship with his wife, Jennifer, before and after the surgery. What challenges does his vision pose in their relationship?

9. Early in MIke’s new vision, he is astonished to learn that highay signs hang over the road and that stop signs aren’t yellow. What are some other visual aspects of our world that sighted people take for granted and never discuss?

10. How do Mike’s children react to their father’s new vision? Was it what you expected? Was it how you would expect your children to react? Is it how you might have reacted if it was your father who came home with new vision?

12. In what ways, if any, was Mike worse off for gaining vision? Were there things he saw that he wished he hadn’t seen?

13. Were you surprised at Mike’s reactions to the sight of certain things? The homeless? The heavyset person in Costco?

14. Dr. Ione Fine must teach Mike to do a lot of "cognitive heavy lifting" in order to make sense of what he sees. What is meant by this? How does Mike teach himself to see?

15. The book often stresses that vision is dependent on knowledge. How is that possible? What is the implication for Mike’s new vision?

16. If you were in Mike’s place, and given all the risks he faced, would you have gone forward with new vision?

17. Discuss the significance of the titles Crashing Through. Have you ever had a similar experience in your own life, of meeting challenges by throwing yourself headlong into a risky adventure?

Learn More About Crashing Through
print
Back to Top