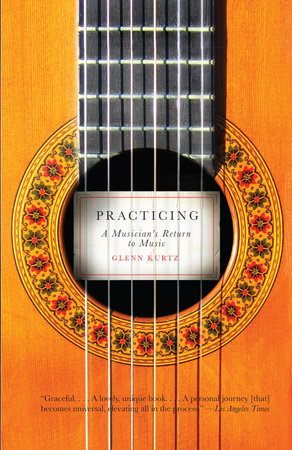 “Graceful. . . . A lovely, unique book. . . . A personal journey [that] becomes universal, elevating all in the process.”
—Los Angeles Times

The introduction, questions, and suggestions for further reading that follow are designed to enliven your group’s discussion of Practicing by Glenn Kurtz.

In Practicing: A Musician’s Return to Music, Glenn Kurtz takes us on a journey of hope, loss, and surprising return to music. Telling the story of his career as a classical guitarist—from his first lessons at the age of eight to his acceptance at the elite New England Conservatory of Music—Kurtz lets the reader into the passionate, hidden world of making and performing music, revealing the elation, the self-doubt, and the intense determination that define the work of practicing.

A prodigy at age ten, by twenty-five, Kurtz realizes that his dream of being the next Segovia will not come true. Devastated by this realization, he quits music forever. Or so he thought. Ten years later, Kurtz returns to the guitar to discover what went wrong. No longer an aspiring artist, he is now a “former musician,” overcoming his earlier disappointment and learning a new and richer kind of love for music.

By examining his own return to music, Kurtz shows how learning to pick yourself up and continue may be the practice room’s most important lesson. In this way, Practicing speaks not just to musicians, but to everyone who has striven for an ideal—and learned from disappointment. Containing vivid portraits of his teachers, friends, and competitors, along with a fascinating history of the classical guitar, its players, and composers, Practicing is an inspiring, entertaining, and meditative memoir. A love affair with music.

1. At the heart of this book is the idea of practice—a particularly intense form of relationship, both with an instrument and with oneself. What does it mean to “practice” something? How is practicing different from just doing it? In addition to the practical aspects of the work, Kurtz writes, “practicing is a story you tell yourself … a tale of education and self-realization” [p. 14]. How does the idea of practice shape the story he tells? Do you practice something now—if not a musical instrument, then yoga, gardening, a sport, an art form, a religion? What are the challenges you face, and how do you meet them? What kind of story do you tell yourself about your work? What kind of relationship is it?

2. In the book, Kurtz divides the narrative between the story of his career as a musician and an account of a single day’s practice session. What does this two-part approach reveal about his experiences? Do you hear a difference in how he speaks about practicing (and himself) in the past and in the present?

3. In the early part of his story, Kurtz dedicates himself to becoming an artist. What leads to this decision? Does his understanding of art and the artist’s life change over the course of the book? What does being an “artist” mean to you? What distinguishes a musical artist from someone who “just plays”? Does this difference apply to other arts, other activities? Must one be professional to be an “artist”?

4. In addition to his own story, Kurtz tells the history of the guitar. Why is it important to him to understand the guitar’s history and how the instrument has been seen by generations of musicians and writers? How might the experience described in the memoir have shaped the author’s understanding of—and therefore his presentation and interpretation of—the guitar’s history? In general, what is the memoirist’s responsibility to the larger history he or she is part of? What kind of “history” is a memoir?

5. In the chapter entitled, “Study in G,” Kurtz writes, “Whether you’re working to change, or working not to, you always return to technique” [p. 80]. What is “technique” in music, and what does Kurtz understand by the term? How do you distinguish technique from “music” itself? (Think of W. B. Yeats’s poem, “Among School Children,” in which he asks, “How can we know the dancer from the dance.”) Does what Kurtz says about technique in music apply, as well, to these other kinds of communication—for example, writing, teaching, commercial exchanges, or in expressing your feelings and ideas to a spouse, a child, or a friend?

6. Arriving at the New England Conservatory as a young musician, Kurtz discovers an intimidating hothouse of talent. What effect does this environment have on his attitudes toward the guitar, music, and himself? With whom (or what) is he competing? Do his feelings about competition change over the course of the book? In your own practice, how do others influence you, and what kinds of competition have you encountered? If you are intimidated, does this make you work harder, or want to give up? What constitutes “constructive criticism”?

7. Aaron, Kurtz’s teacher, is central to his experience at the Conservatory. How is the teacher-student relationship described? What methods does Aaron use to teach—and what are the lessons he wants to convey? What does Kurtz learn? Are these lessons evident elsewhere in the book? If you were a young artist, just entering a conservatory, what do you think you would need to learn? How would you want to be taught? Or if you were the teacher, how would you instruct an ambitious, passionate, but unformed young artist? Can artistry be taught?

8. In the chapter “Kitchen Music,” Kurtz contrasts his ideal of “art” with the world of commercial music making—a concert hall versus a “gig.” What is his attitude toward these different worlds of music and the people who inhabit them? How does he distinguish “good” listeners from “bad”—or even “good” music from “bad”? Are these distinctions real or important? What do you think is the proper place for music (or art) in a commercial culture?

9. The chapter “The Music of What Happens” describes the process of learning to be a performer, and it ends with Kurtz walking onto the stage. What does it mean to “perform” music, and how is this different from “practicing” or “playing” it? What does Kurtz think in this chapter? Does his opinion change at the end of the book? Why does he end the chapter just as the performance is beginning? What kinds of performance have you experienced? How does performing affect your relationship with your “practice” and with yourself?

10. Kurtz’s experience as a young musician in Vienna marks the turning point in his career. What contributes to his decision to quit music? Do you think this decision was avoidable or inevitable? Can you compare how he feels about it in the past and in the present? How did this loss affect him? Have you experienced a similar loss? How did you deal with it when it happened? How do you feel about it now?

11. In many ways, the book is about Kurtz’s abandonment of music, and yet the return to music at the end changes that experience. How? Why do you think he returns to music? What emotions are released by returning, and what emotions have stood in the way? What does he feel he has learned from the experience? What do you think he has learned? Have you had a similar experience, returning to something that has been a source of so much hope and disappointment? How did you feel when you came back? Had the “practice” changed for you in the intervening time? Have you changed?

12. Writing about music is notoriously difficult—both because music is so abstract, and because each listener has such distinctly personal responses to it. How does Kurtz approach writing about music (and is there more than one approach in the book)? Are there passages or stylistic elements that capture the sensation of music, or that seem “musical” to you? What does it mean for writing to be “musical”? (Or for that matter, for music to “tell a story” or “take you on a journey”?) Is writing about music more or less difficult than writing about other abstract things, for example memories or emotional states? How does Kurtz handle these? How do you describe the music you love to others?

Glenn Kurtz holds a Ph.D. in comparative literature from Stanford University and has taught at San Francisco State University, California College of the Arts, and Stanford. He lives in New York City.

For Practicing Musicians
Madeline Bruser, The Art of Practicing: A Guide to Making Music from the Heart; William Westney, The Perfect Wrong Note: Learning to Trust Your Musical Self.

Whatever You Say I Am