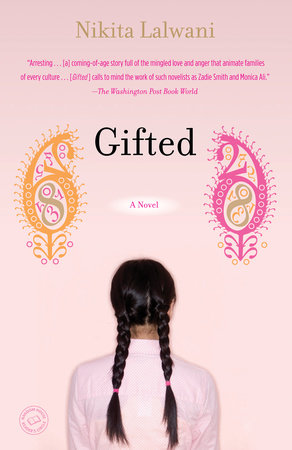 1. How does Rumi’s focus on mathematics influence the structure of the novel and the way she processes the world?

2. Shreene’s sister in India tells her she was “always the lucky one.” Would you characterize Shreene as lucky? What are the grounds for Shreene’s discontent and “desolation”? What similarities and disparities do you see between Shreene and her daughter?

3. “Nobody, not even the rain, has such small hands.” Rumi cites this line from e.e. cummings during her first trip to India. What does rain, the moon, and the stars represent within Gifted? How do these elements surround Rumi’s relationship with Bridgeman?

4. How do the characters in Gifted contend with cultural stereotypes?

5. Reflect on the conversations between Mahesh and Whitefoot while playing chess.What do we learn about Mahesh through their interactions?

6. Does Rumi ever transcend her self-described role as an “irrelevant… observer”? If so, how?

7. Discuss the importance of ritual for Rumi and Mahesh within Oxford University, Indian culture and Western society.

8. Rumi becomes increasingly impulsive and self-destructive as the novel progresses.What influences and perpetuates these tendencies? What do the cumin seeds represent for Rumi?

9. Shreene repeatedly admonishes Rumi for asking “shameful” questions about bras and sex, even telling Rumi “that is not how our babies are born. Only white people have sex.” Why is Shreene so critical of Rumi’s inquiries? How do her questions represent a lack of “decency” and “respect” to Shreene? How do their arguments progress?

10. Mahesh explains that “the label ‘gifted’was meaningless to them as a family and …a damaging idea to perpetuate in the population as a whole.” He believed that “any child could achieve this kind of knowledge and success rate, given the right developmental approach by the parents.” Do you agree? Why or why not?

11. Discuss the presence of duality throughout Gifted: between right and wrong, thoughts and actions, perception and reality, and logic and emotion. How does Rumi embody these dualities?

12. Rumi insists that her strict regimen in the hopes of reaching Oxford “is what [she has] chosen …Until [she is] free.” Her mother maintains that Mahesh “has given [her] too much freedom,” while Mahesh is not “deluded enough to think that the world is full of choices.” Discuss the manipulation of choice within Gifted and it’s relation to freedom.

13. How do Rumi’s perceptions of herself evolve throughout Gifted? What influences how she sees herself? Why does she decide to “walk in the valley of truth”?

14. Are Mahesh and Shreene perpetrators, victims, or both?

And Their Children After Them
Nicolas Mathieu

The Haunting of Hajji Hotak and Other Stories
Jamil Jan Kochai

The Law of Enclosures
Dale Peck

And After Many Days
Jowhor Ile

All We Shall Know
Donal Ryan

Walking Into the Night
Olaf Olafsson