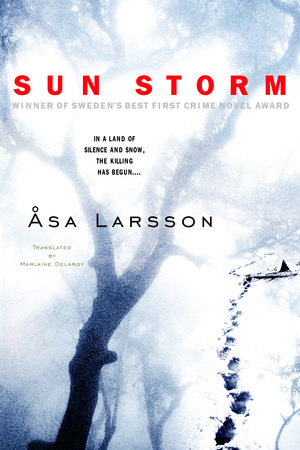 An international literary sensation and winner of Sweden’s Best First Crime Novel Award, Sun Storm opens with a chilling scene: the mutilated body of a man lies on the floor of a rural church; through the windows, the Aurora Borealis twists in the night sky, evoking the image of a dragon. As life slips away from Viktor, he remembers the first time he died, years ago, when he was just a child.

From these compelling beginnings, Asa Larsson spins an intense and shocking mystery. Racing to solve the crime is Rebecka Martinsson, a Stockholm attorney with painful ties to Viktor’s church. But to find the real killer, Rebecka must face her brutal past and confront the religious leaders who betrayed her trust.

With rapid-fire pacing, Sun Storm raises provocative questions about power, faith, and justice. The questions and discussion topics that follow are designed to enhance your reading of Asa Larsson’s Sun Storm. We hope they enrich your experience of this haunting thriller.

1. Discuss the lines of poetry that form the novel’s epigraph. What do they say about the nature of evil? Which of the novel’s characters give voice to the sinister intentions in the epigraph?

2. How does the title reflect Rebecka’s experience with danger? How do natural phenomena, from the sun storms that Sanna discusses to the February snows, shape the novel’s tone?

3. How did you interpret Viktor’s belief that he had died in an accident when he was younger? What did the event signify to him? Discuss the most dangerous situations you have ever experienced. What led to your survival? How did you view the world afterward?

4. What is the effect of the novel’s structure, unfolding in scenes rather than longer, numbered chapters, over the course of seven days? How did you respond to the lines that open each day, taken from the account of creation in the Book of Genesis? As the week progresses in Sun Storm, which characters create order out of chaos?

5. Whom did you originally suspect of murdering Viktor? Did you ever believe that Sanna could have done it? How did Rebecka’s feelings toward her shift throughout the week? What convinces Rebecka to take Sanna’s case?

6. What are the dynamics between Sven-Erik and Anna-Maria? What strengths and vulnerabilities does each one possess? Will they ever become as hardened as Carl von Post, or is his personality due to something other than the grisly nature of their work? What management styles are presented in von Post and Mans Wenngren?

7. What were your impressions of The Source of All Our Strength? What was the architecture of the Crystal Church designed to evoke? How did you react to Rebecka’s discoveries about the church’s finances?

8. Discuss the balance between civil liberties and public safety in cases such as Curt Backstrom’s. How should his case have been handled? What would have ensured that he took his medication?

9. What do you think of the statement of the duty doctor at the psychiatric unit in Gallivare who tells Anna-Maria, “Weak people are often drawn to the church. And people who want power over weak people are also drawn there”?

10. How do women fare in Sanna’s church? Does the town of Kiruna seem to foster progressive attitudes toward women? How does Sanna’s mother, Kristina, resolve her despair?

11. What is the effect of the novel’s timeline, woven with flashbacks? What did you imagine to be the painful secret in Rebecka’s past? How were memories woven with the various dreams presented in Sun Storm?

12. Why did the church favor Thomas and oust Rebecka? What was the source of Thomas’s allure?

13. What is your understanding of Sanna’s molestation fears? Where does the guilt reside? What scars do she and her daughters bear?

14. What distinctions do you imagine there were between the way Sanna and Viktor were raised? Do you attribute her personality to nurture or nature? How were both siblings affected by their parents’ behavior?

15. What makes the last scene appropriate for the novel’s closing passages? What cycles of life has Anna-Maria experienced, leading up to the seventh day?

16. Discuss your own experiences with returning to your childhood town or home. What memories anchor you to a particular place?

The Ice Beneath Her

Echoes from the Dead

Polar Star
Back to Top