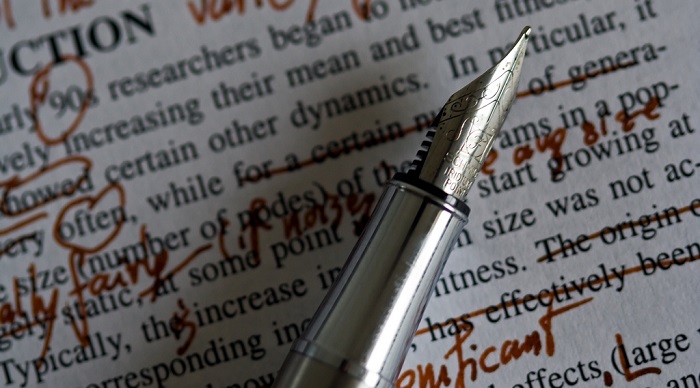 This article was written by Jennie Yabroff and originally appeared on Signature Reads.

If, as Oliver Kamm writes in his new book Accidence Will Happen, “learning rules of language is part of what it is to be human,” then arguing over what those rules are, and if they matter, is most certainly another part. Can you start a sentence with ‘hopefully?’ Is confusing ‘it’s’ and ‘its’ an unpardonable offense, or no big deal? And is it ever OK to use the plural pronoun ‘their’ when you’re referring to a single person? (And what about starting a sentence with and?) Today, people who have strong opinions about the answers to these questions (a small but passionate minority) fall into two groups: pedants and permissives, or, as Kamm differentiates them, prescriptivists and descriptivists.

Kamm, who writes about grammar and usage for the London Times, calls himself a ‘recovering pedant’ who believes much of our insistence on set rules for English is really a cover for snobbery and exclusivism. Yet he is not above correcting others who have written similar books, especially the sticklers, who, he claims, “are confused about what grammar is,” (and who would probably suggest he rephrase his sentence so as not to end with the prepositional-sounding ‘is’). Grammar, he points out, refers to syntax, morphology (the way words are formed), and phonology (the way words sound). Sticklers, he writes, often confuse grammar for orthology (spelling and punctuation). Whenever one of these purists publishes a book, armchair grammarians (and orthologists) take great glee in pointing out the errors in the text (many of which, to be fair, are merely typos that slipped past the eye of wearied copyeditors). To figure out which side of the great debate you fall on (if you think that sentence should read, ‘to figure out upon which side you fall,’ you already know the answer), check out these other guides to the confounding, complicated, and fascinating language known as modern English.

Eats, Shoots and Leaves by Lynne Truss Truss, the author of several guides to punctuation, comes down firmly on the side of the sticklers (and earns Kamm’s wrath for her punctiliousness). As the title of her book proves, a misplaced or missing comma (or apostrophe, or hyphen) radically alters the meaning of sentences, turning the dietary habits of a panda bear into a description of a gun-bearing mammal who dines, opens fire, then departs.

Between You and Me by Mary Norris The New Yorker is as famous for its exacting copyediting process as it is for the peccadillos of certain editors such as William Shawn, who forbade words including ‘workaholic,’ ‘balding,’ and ‘urinal.’ This memoir by Norris, who has worked at the magazine since 1978, was an unlikely hit, and spawned an online video series where she reveals the grammar errors she’s found in writers’ drafts, and describes not just why they’re wrong, but how to fix them.

Elements of Style (Illustrated) by William Strunk, Jr., E.B. White, and Maira Kalman If grammar has a Bible, it is this book. First published in 1918, when the world was in need of some solid, straightforward guidance, this book remains beloved for its no-nonsense tone and unapologetic belief that the rules of grammar do exist, and are actually quite easy to follow, if you just pay attention when you speak and write. This edition, lovingly illustrated by Maira Kalman, injects the book with a playful visual guide to the etiquette of proper sentence construction.

Yes, I Could Care Less by Bill Walsh The problem with the way most of us speak and write, the author of this book contends, is we forget to consult our brains. A longtime copyeditor for the Washington Post, Walsh is happy to hold the unpopular opinion that there is a right and wrong way to use words, and it actually matters if we say ‘literally’ when we mean ‘figuratively’ or claim we ‘could care less’ when in fact we mean the opposite. Walsh himself cares, quite a bit, and isn’t afraid to stand up for what he believes. Image © flickr
Back to Top