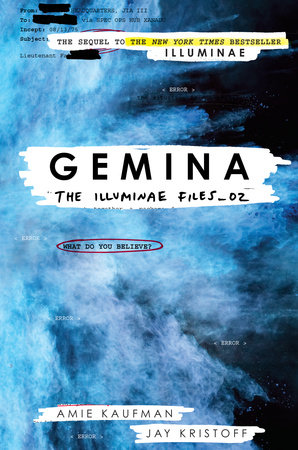 We’re going deep inside the making of a book, with interviews from Penguin Random House employees. Take a look at the first post in this series here.  Ever wonder how an audiobook gets made? Especially one as complicated and visual as Gemina? Read on for interviews with Audiobook Producer Janet Stark, Project Director Erin Spencer, and Audio Engineer Patrick Billard.  You can preorder the book here. For a Q&A with the authors, click here… and for you superfans, join First In Line here to see the full uncensored version. Follow along: #Gemina, #Illuminae, #IluminaeFiles Listen to an excerpt of the audio book now! What is your job title, and what does that mean for your daily work?

Janet Stark: It’s funny, many people I meet in daily life don’t understand what an audiobook producer does. Senior Producer is on my business card. We producers are a bit like casting directors working in collaboration with authors. Hiring actors, scheduling recording studios, basically managing a group of contributors (directors, sound editors, sound design people), all the way to QC notes and delivering the final audio. The production process always begins with reaching out to the author or authors to get a sense of ideas or expectations for the audio, and take it from there.

Patrick Billard: I’m the Audio Engineer here at Penguin Random House studios in Los Angeles. Our facility is made up of 10 recording studios designed for the purpose of recording audio books. I setup recording sessions and make sure our actors have good recording levels that match our specs, I assist the directors with any issues they may be having during the recording process, I maintain the studios to make sure they are clean and in working order and I book actors to come back to the studios after recording is finish to do pick-up sessions to fix any outstanding issues that remain after the books have been edited and proofed.

How did Gemina sessions compare to the usual audiobook session setups?

Patrick Billard: The Gemina session was quite different from our typical session here at PRH Studios where most books have one to two readers at most. Gemina was a large project with many actors so our setup was tweaked to have 3 microphones ready to record in our largest booth. Working with Ok Hee Kolwitz, Assistant Director of Technology and Post Production, we spent a couple days setting up the studio to accommodate the 3 mic setup, which required pulling backup gear from our storage closets and arranging the mics, chairs and music stands for optimal audio quality and sight lines for the actors. Erin Spencer, the director for Gemina, was amazing and did so much prep work to make the session run smoothly. We had to work on the fly as actors were going in and out of the studio to do their lines and we had to keep the levels consistent so we always had a good match

How long did it take to cast this book?

Janet Stark: The best way to describe Gemina: a casting marathon. Amie & Jay provided character descriptions for the primary characters. Secondary voices, maybe ten more, were cast as the book was taken apart page by page. Erin Spencer was project director, and she and I spent long meetings with the pages to nail down the session strategy. Separating out individual page sets for each role, using Gemina’s chat style format of multiple characters per page, we more or less dissected the book to make the most of each actor’s time. Then came the many minor voices with only a few lines each. People in the studio’s vicinity were being asked to get behind the mic for a line or two, resulting in a long list of uncredited voices. Being in the moment during sessions, ready for the unexpected, was basic to this production.

What was your favorite part of this project?

Janet Stark: Recording the pop song snippets! Amie & Jay put the lyrics in the text, then the music actually found me as I listened to a blast of new selections. The melody sung by Erin, well, I can’t imagine a session more fun than that.

Patrick Billard: Engineering the pop song part of the session was fun for me since my background is as a recording engineer at music studios in Manhattan for the past 10 years before moving to Los Angeles and starting to work here at PRH studios. Janet Stark, the producer for Gemina, also has a background in music studio engineering so we worked together during the session. I used my extensive experience tracking vocals for pop songs to coach Erin to get good takes and to help hone the parts as the song was being tweaked during the recording process, which is quite typical for most vocal tracking sessions for pop songs. We all had a lot of fun recording the pop song.

How long does an audiobook of this complex take to produce? Is that similar to a standard audiobook production?

Janet Stark: Comparing the complexity of Gemina to a standard audiobook, I’d have to say it was more like producing a film on audio. So many voices, evolving characters, sound effects, it all adds up to an experience I hope people enjoy.

Were you comfortable contributing voices here & there? Had you done something like that before?

Patrick Billard: Yes, Erin and Janet recruited most of the staff here at PRH to do wild lines and it was a lot of fun. For me it was a good experience being on the other side of the glass, as it makes me realize what it’s like to be a voice actor and that it’s not nearly as easy as it may look or sound. It also made me appreciate Erin’s skill as a director- she really knew what she was going for with my lines and did her part coaching me through the process. My particular lines were rather loud and vulgar which made me step out of my comfort zone which was exciting.

Erin Spencer: Working on Gemina was a truly unique experience and unlike any other audiobook that I have directed.  To begin, I read the entire book to get an overall sense of storyline and character arc.  From there, it’s a matter of going over each page individually to see what is happening in each ‘scene’, which characters are speaking and how the art work and graphics can be adapted into an audio format.

We needed upwards of 20 actors for Gemina – with only a handful recurring from Illuminae, so it was up to Janet Stark and me to find the right actors for the roles we had available. Casting is very important and it’s a lot of fun to have so many actors on one title!

Studio time is really the most fun but equally the most stressful time for me, the project director.  We had up to three actors in the recording studio at one time because Gemina was recorded as if we were doing scenes in a movie.  The actors are able to engage and play off of one another, which really brings a sense of realism and keeps the tone very organic. As the director, I ran a very tight schedule each day. I may have had 15 actors coming in to read in a single day and the organization and scheduling had to be precise.  My mantra on those days is TRUST!  Trust that I did all the prep work needed to ensure we have every page covered, that all the actors are prepared with their pages, and that I have done everything I can do to make the process smooth and that the end product will be amazing!  We don’t read this book like you would do with other books – in order, page by page.  It’s read completely out of order based on which actors I have scheduled together that day.  So, I have to trust that it’s all there.  And honestly, when it’s all over, it’s simultaneously a relief and a little grief at the same time!

After Illuminae came out, I received the CDs so I could listen to it on my commute to the studio.  I literally cried when I heard it.  Cried out of sheer pride for all the actors who worked so hard, for the editor who did such a phenomenal job and in my mind has one of the toughest jobs of all, cried for the post-production team, and especially for Janet Stark who pulled it all together.  I can’t wait to cry over Gemina, too.