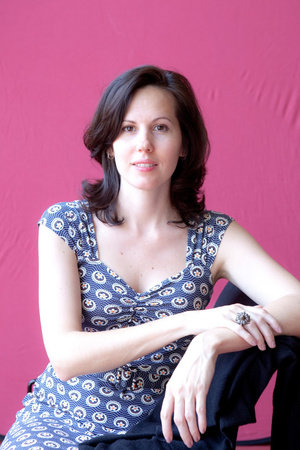 Danielle Trussoni is the author of the critically acclaimed memoir Falling Through the Earth, which was one of the New York Times’ Ten Best Books of 2006. She is also the author of the internationally bestselling novels Angelology and Angelopolis, which have been translated into over 30 languages. She has lived in Japan, England, Bulgaria, and France. She currently lives in New York City.

A conversation between Danielle Trussoni and Justin Cronin, bestselling author of The Passage and The Twelve

Justin Cronin: As novelists, both of us have chosen to blend the emphasis on character usually associated with literary writing with the plot-driven habits of commercial fiction.  I have to say, from my own experience, this is a real challenge.  What led you to take it up, and what do you make of these labels?  What does the word “genre” mean to you?

Danielle Trussoni: Readers love books that take them somewhere, that teach them something about the world, that have characters that speak to them. At least, these are my favorite kinds of novels. And so when I’m reading, it is more important to feel engaged with the world of the book than to know exactly how it all works. Obviously, when I’m writing, the process is quite different. There is a technical balance between style, character, plot, description, etc. that I’m always aware of. But basically, I write the kinds of books I love to read. I try not to get too caught up in the idea that “literary” writing or “commercial” writing are on opposite sides of the spectrum. As a writer, it is important for me to have the freedom to move between styles and genres freely. The bottom line for me is that I write what I love, I write what moves me, and I write what I need to write to move forward artistically. The style and the subject matter are wholly secondary to these other motivations.

JC: We also share the fact that our most recent works are a major departure from our earlier books. Your first, the memoir Falling Through Earth, is seen by many as worlds apart in style, voice, and content from Angelology and Angelopolis.  How do you connect your work as a memoirist to these novels? Was your creative process the same?

DT: I heard a lecture by Kurt Vonnegut once where he said “Writing is a print-out of the soul.” It seems to me that this holds true even when a writer explores vastly different subjects and genres. The writing itself is a reflection of the writer’s particular voice and vision, and this is what remains fixed over the course of many books. My first book may be quite different in style and content from my novels—it was a memoir about my childhood with my father, who was a solider in the Vietnam War—but there is something very personal that marks it as my book. This is what makes the act of writing so mysterious: Whatever a writer may do to mask herself, she is still there, recognizable.

JC: When you began the writing of Angelology, did you conceive of it as the first in a suite of related novels? How does writing a sequel affect your artistic choices? Given that the characters and drama span more than one book, how do you find the sweet spot between giving away too much and too little?

DT: Actually, I thought Angelology was a stand-alone novel for a long time. It wasn’t until I got to the end that I realized that it needed to continue. It wasn’t until I began to write Angelopolis, however, that I realized how very difficult it would be to write a sequel. All of the things I love doing as a novelist—introducing new characters and building a “fictional world”—take on a different aspect in a sequel. There is less description and more action. The characters need to move forward in a different way. I found the change in tempo difficult, to say the least.

JC: Along the same lines, Angelopolis is, of course, a sequel. But it also works as a stand-alone book.  How did you pull this off?

DT: I felt very strongly that Angelopolis needed to be both a continuation and a story that a reader could pick up and simply enjoy without having read Angelology. The real challenge for me was to reintroduce the cast of characters in just the right way. For those readers of Angelology, the characters had changed and so I needed to give some background about why this had happened. For readers coming to Angelopolis fresh, I wanted to present fully formed characters that were immediately engaging. It wasn’t at all easy. But at the same time, I found that there was a new lightness in Angelopolis that Angelology did not have.

JC: Evangeline is our guide for Angelology, but in Angelopolis, we spend the majority of our time with Verlaine and see the world through his eyes. What inspired you to make this shift?

DT: First of all, I chose Verlaine as the primary narrator for Angelopolis because I’ve always loved Verlaine as a character. In Angelology, he was a more or less regular guy who fell into the mystery by chance. When Angelopolis begins, Verlaine is in Paris, where he has become an angel hunter. He’s undergone extensive training in the detection and containment of angelic creatures, which gives him a stock of new information that makes him particularly interesting. I also felt that his point of view would be the most dynamic, and bring readers into the situation with more ease than Evangeline’s.

JC: Myth and religion play a vital role in your work. How do you go about weaving ancient texts and legends into your storylines?

DT: Every one of the books I’ve written have been inspired to some degree by mythology. I’ve always been completely fascinated by history, religion and mythology, and for me these elements are primary building blocks for my imagination. I find, especially with Angelology and Angelopolis, that I like to use mythology and religion as elements of the plot. I like to raise the question “What is mythology and what is reality?” and to see this question play out in the novel. In this, I’m inspired by novelists like Mary Shelly and Umberto Eco and Wilkie Collins, whose literary mysteries spring from a mythological source.

JC: A great deal of research—from the history of the Russian tsars to genetics to the creation of the Fabergé eggs—clearly went into Angelopolis. Did you do all your research before you began writing, or did you look into topics as they naturally arose?

DT: Although I have a general idea about the research that will go into a book when I begin it, I tend to do the bulk of my research as I write each scene. I will have books and notes piled up on my desk as I write, so that I can verify facts and look at photographs while writing certain descriptions. I had a lot of fun doing research about the Romanov and Fabergé eggs. I became so completely absorbed in the period that I could have spent all of my time simply reading about Russia.

JC: Is the history you include in Angelopolis always “true?” How do you negotiate the line between history and myth?

DT: The historical situations and characters in Angelology and Angelopolis are all researched and so the information about these periods and people is “true.” I use actual historical documents, religious texts and even people to create an aura of reality in the books, and so I find that my research must be accurate. There are, however, moments when I use historical information as the basis for imaginary events in the novel. For example, in Angelopolis, I have used the Romanov Grand Duchesses as characters. While their behavior and habits have been taken from historical sources, I allow imaginary characters to speculate and to elaborate upon their personalities. The same holds true for the uses of historical documents such as The Book of Enoch in Angelology and The Book of Jubilees in Angelopolis.

JC: Angelopolis takes place all over the world, in countless extraordinary landscapes. Have you visited many of them? What are the challenges of creating such a convincing sense of place without having first-hand experience of a given location?

DT: I have spent a lot of time in Paris, and so the scenes written there were all created from photographs and notes I took myself. And, of course, the scenes in Bulgaria are all recreated from personal experience. But I have never been to Russia, and so it was necessary to do a lot of reading and research about Saint Petersburg and Siberia. I very much hope to go to Saint Petersburg someday to see the place that has inspired so much of my novel.

JC: What do you make of our culture’s current obsession with supernatural archetypes—zombies, werewolves, vampires, angels?  And what of the recent surge in apocalyptic tales? What about the present moment accounts for these preoccupations, and what draws you as a writer to these subjects?

DT: This obsession has always been with us. Our connection to the supernatural is an outgrowth of our cultural heritage. Greek mythology, Egyptian mythology, Native American mythology—all of these systems of belief and storytelling were filled with supernatural beings. The Judeo-Christian heritage in which I was raised is filled with spirits, angels, and miracles. I find any impulse to reject this vital part of our culture, to look upon it as a dubious phenomenon, to be somewhat strange. Personally, my books cover subjects as “materialist” as genetics and as “supernatural” as angels. In my opinion, a novelist must have the freedom to explore human experience, wherever it may take her.