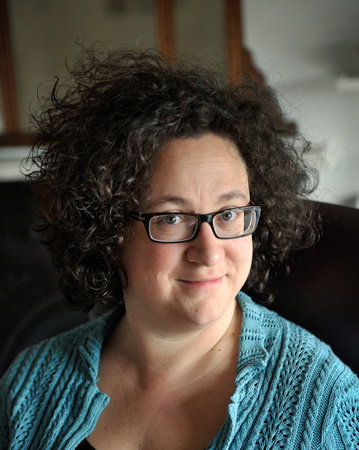 Sophie Hannah is the bestselling author of nine novels and is also an award-winning poet. Her Hercule Poirot mystery, the first to be sanctioned by the Agatha Christie estate, was published in 2014. She lives in Cambridge, England, with her husband and two children, and is a Fellow Commoner at Lucy Cavendish College.

The Other Woman’s House

The Cradle in the Grave

The Dead Lie Down

In each of your Simon Waterhouse and Charlie Zailer mysteries, you open with the first-person narrative of a clearly unreliable and unlikeable character. Yet over the course of the novel, you manage to make their quirks understandable—if not wholly sympathetic. Do you challenge yourself to devise and then redeem the most abrasive "protagonist" you can create?

Well, first of all, I have to say that I don't ever think of my characters as unlikeable, and I don't even think they seem unlikeable at the beginning of the books, though I know some readers do. The way I write is by getting right inside my characters' minds, and if you're right inside anyone's mind, you see all their thoughts—the good and the bad. For me, if someone behaves badly or has a selfish thought, this doesn't make them unlikeable—it makes them real. All the people I love most in the world have had the odd vicious thought and done the odd terrible thing. If my books had been written by someone else, and I read them, I would really, really like the main characters! I would cheer for them, even when they behaved immorally (like Naomi lying to the police). Sometimes you have to do the "wrong" thing to get to the right thing—so I was totally on Naomi's side when she lied to the police. Very few people behave well at times of extreme stress—it's all they can do to get through the trauma.

Do you think Juliet's loathing of Naomi is rooted in jealousy over her relationship with Robert?

Yes—and the huge irony is that, even when Juliet knows the full truth—that Robert isn't the great prize catch she at first thought he was—she's still jealous of the woman he planned to leave her for. The human ego is a deranged beast—we resent others getting their hands on what we consider to be rightfully ours, even if that thing is very bad for us. I know, and have known, many women who would fight to the death to hang on to their utterly repellent boyfriends/husbands, when everyone else is secretly thinking, "For God's sake, let her take him!" Also, Naomi and Juliet should clearly be allies, and could maybe help and support each other a lot, but throughout the book they are enemies. I am very interested in the gross stupidity of extremely intelligent people—it's everywhere. I find it fascinating that people so often act in a way that is contrary to their own interests.

Where do you find inspiration for your fiction?

In real life—mainly my own. And then I add to my own experience to make it thrilling enough to grip readers.

Marie Claire has written that you have "a bone to pick with suburban women who have it all." Do you think this is true?

Not at all. I read that, and didn't understand it. We're told, these days, that we can have it all, and we're constantly seeing examples of glamorous mummies who also have brilliant careers—so why shouldn't we try to aim for that too? I have combined family and career pretty successfully, but the part of "all" that I don't have is the glamour. I regularly wear scruffy, shapeless clothes and neglect my hair, and as for makeup…; I don't have time. If I wore makeup, I'd have to give up breathing or brushing my teeth.

Each of your novels is focused on a crime that resonates far more deeply with women than with men. And while the men are often villainous, it is the women who are truly twisted. Is the dark underbelly of the female psyche richer fodder than that of the male's?

Interesting. I think my male and female characters are equally twisted. Yes, I've thought about it and I'm pretty sure. There's many a horrendously psychotic bloke in my novels…; and women too, of course. I'm a thoroughly equal-opportunity psychotifier! One thing I would say, though, is that men tend to vent their aggression and negativity more openly, whereas women tend to repress and seethe—or at least I do!

The rapes you describe in this novel are almost shockingly outré. Do you believe that crimes of this nature are really being committed?

As Jerry Seinfeld once so wisely said, "I wouldn't put anything past anyone." No, seriously, I once heard the husband of a friend of mine say that on his friend's stag night, he and four friends all took turns having sex with a prostitute, one after another. In fact, Graham is based on that person, who shall of course remain nameless!

Ellery Queen once said that poets and mystery writers both deal in turning "chaos into order." As a poet and a mystery writer, do you agree with this statement?

Absolutely—both poetry and crime fiction are all about structure and shape.

Women in love—Charlie included—never seem to fare well in your novels. Do you feel that, in general, they're better off alone?

God, no. I'd never advocate being alone. It's much better to have a series of miserable and unfulfilling relationships and keep hoping that a jolly and fruitful one will come along. If you're optimistic, good things usually happen. I am very happy with my husband—and I'm glad I wasn't put off relationships by all the vacant, uninspiring, twisted…; (trails off bitterly).

There is clearly unfinished business between Simon and Charlie, but Simon seems to have personal issues that still need addressing. Will we get to see more of his interior life in future novels?

Oh yes, readers will get to know Simon a little better in each book. But anyone who is waiting for the big secret that unlocks the mystery of Simon will be disappointed. His psyche is more of a jigsaw that gets put together gradually—this is more realistic, I feel. We understand people better by degrees. Generally, there isn't a Eureka moment when someone says, "Aha, now I get it!" about someone else's personality. Though that can happen…;

I don't know how common it is, but I know that some men and some women have sexual fantasies involving rape. This is no way means that the men really want to rape women, or ever would, and it in no way means the women would secretly like to be raped—that's the most important point to make. As long as it remains at the level of fantasy, no harm is done. Would I say to a man (or woman) whose sexual fantasies involved rape that those fantasies were wrong, that they "shouldn't" have them? No, I don't think I would. "Shouldn't" is a fairly pointless word, and surely we should be free in our fantasies in a way that we're not in real life. For example, the other night I entertained a nasty revenge fantasy. Someone had been horrible to me, and I imagined being really vile and vicious back to them, in a way that would destroy them, leave them a crumbling wreck of their former self. I enjoyed the fantasy, but I would never have tried to make it a reality because I didn't, and don't, want to destroy that person—I just wanted to entertain myself by imagining it while I was angry. But to do it in reality would make me feel ill. In reality, to behave in that way would make me feel sick to my stomach, and I'd rather be a doormat and take the flak than treat anyone so horribly—because probably, deep down, I'm a peaceful-minded wimp! So maybe my aggressive retaliatory fantasies compensate, I don't know. Anyway, I think you get into dangerous territory when you start to police your own mind, or the minds of others.

The series is currently being adapted for television in Britain. What are you most concerned might get lost in the translation?

The TV version will be the cousin of the book version, not its twin. Therefore it doesn't matter if it's a bit different—it's supposed to be, because TV is a different medium with different needs. Trying to make one replicate the other is a bit weird—a bit like those parents who force their kids to wear matching clothes—yuck!