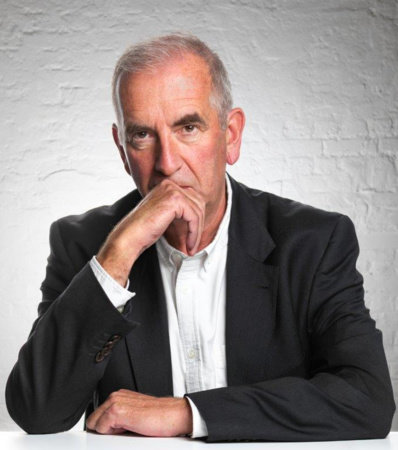 ROBERT HARRIS is the bestselling author of fourteen ROBERT HARRIS is the author of fourteen bestselling novels: the Cicero Trilogy—Imperium, Lustrum and Dictator—Fatherland, Enigma, Archangel, Pompeii, The Ghost, The Fear Index, An Officer and a Spy, which won four prizes including the Walter Scott Prize for Historical Fiction, Conclave, Munich, The Second Sleep and V2. Several of his books have been adapted into films, including The Ghost. His work has been translated into forty languages and he is a Fellow of the Royal Society of Literature. He lives in West Berkshire with his wife, Gill Hornby.

Robert Harris on the writing of POMPEII

If anyone had told me five years ago that my next novel would be set in the time of the Roman Empire, I would have laughed in their face. I had written fiction about the Nazis (Fatherland), wartime Britain (Enigma) and Josef Stalin (Archangel) and although I felt a need to escape from these chilly, monochrome landscapes, it never crossed my mind that I might take a leap into the luxurious, sun-drenched world of the Bay of Naples in the first century.

What I thought I would write next was set a novel in America, perhaps in the near future. The story I had in mind might loosely be described as ‘the Walt Disney Company takes over the world’: a thriller about a utopia going horribly wrong — a novel about hubris and nemesis — and I even found an epigraph that I meant to have printed just after the title page, a typically aggressive, provocative passage from Tom Wolfe: ‘American superiority in all matters of science, economics, industry, politics, business, medicine, engineering, social life, social justice, and of course, the military was total and indisputable. Even Europeans suffering the pangs of wounded chauvinism looked on with awe at the brilliant example the United States had set for the world as the third millenium began.’

There was only one problem with this novel. Try as I might, I simply could not write the damned thing. I visted Silicon Valley and the George Lucas ranch in California, Walt Disney World and Disney’s very own model town, Celebration, in Florida. I put more than a year’s work into the project. But the characters stubbornly refused to come alive and the subject remained as flimsy as smoke. And then, one morning in the summer of 2000, just as I was queasily coming to terms with the fact I had wasted months of my life, I read a newspaper report about fresh scientific research into the destruction of Pompeii. ‘Now that,’ I said to my wife, ‘would make a great book.’

‘Toga resistance’ was what one well-meaning friend warned me I would face if I tried to write a novel set in ancient Rome. And, of course, I knew what he meant. Intellectually, it may be possible to argue — has, indeed, become a truism to argue — that Rome in the first century and America in the twenty-first are remarkably analagous. Artisitically, it is a much harder comparison to make. So much about the Romans — their habits and assumptions, the way they spoke, even their names — is alienating to the modern mind. The novelist who wishes to write a book set 2,000 years ago faces a choice. Either he or she makes the book authentically Roman, in which case it risks being unreadable. Or he makes it readable, in which case it won’t feel authentic.

I saw no way of resolving this dilemma, until I visited Pompeii. Late one August afternoon, climbing the steep road that slices through the centre of the town towards Vesuvius, I caught that familiar smell of water drying on hot stone — like a thunderstorm on a dusty London street — and it suddenly struck me that what I was smelling (the water), and seeing (the slate-blue outline of the distant mountain), and feeling (the sun on my back) would have been exactly the same for a character in Roman times. After a few minuts’s searching I found the source of the water. And at that moment, although I didn’t yet realise it, I also found my novel.

Pompeii, I discovered, when I returned to Britain and started to do some research in the Ashmolean library in Oxford, was one of nine towns linked to the immense Campanian aqueduct, the Aqua Augusta — a sixty-mile main line, which delivered water to perhaps a quarter of a million people around the Bay of Naples. It captured the Serinus springs in the pine-forested mountains west of Sorrentum, curved around the north-eastern slope of Vesuvius, and eventually terminated in Misenum, on the far side of the Bay, which served as the headquarters of the Roman fleet, commanded by the famous scholar, Pliny the Elder.

This gave me the narrative spine of my book, and also — I hope — a fresh way of writing about the Romans, for although there have been endless books and films about Roman emperors and Roman gladiators, no one, as far as I know, has ever focused on a Roman engineer. Yet Rome’s engineering — its roads, bridges, baths and aqueducts — was not only a vital feature of its society, but remains a staggering testament to the Romans’ brilliance. As the leading academic expert on the aqueducts puts it: ‘How can we withhold our respect from a water system that, in the first century AD, supplied the city of Rome with substantially more water than was supplied in 1985 to New York City?’ And if one had to choose a Roman character most sympathetic to the modern mind — a man at once practical, resourceful and dedicated to public service — then who better than an engineer?

Once I had the character — Marcus Attilius: there’s no avoid those names, I’m afraid — the story quickly followed. We know from the new research that there were earth tremors in the region of Pompeii in the few days before the eruption, and also that one consequence of the magma rising into the volcano was the failure of springs and wells across Campania. It did not seem to me to be stretching credulity too far to imagine a young engineer — an aquarius — sent south from Rome, in that fateful fourth week of August A.D. 79, to investigate a problem on the Aqua Augusta. And by having him arrive at the headquarters of the aqueduct in Misenum, it was possible to enjoy another bonus: to bring into the story the character of Pliny — the polymath author of the Natural History, who famously perished when he put the Roman fleet to sea to try to rescue survivors from the eruption.

Pompeii has taken me three years to produce, from reading that original newspaper cutting to delivery of the manuscript to my publisher. No period has been more enjoyable in my writing life. And if the price I had to pay beforehand was eighteen wasted months trying to write about America, then I don’t begrudge it. Besides, nothing a novelist ever does is ever entirely wasted. When I write about the Bay of Naples, I also have in my mind Malibu and Palm Beach. The millionaire Roman ‘New Men’ in their luxury villas beneath Vesuvius are, to me, not that far removed from the dot.com billionaires I saw in San Francisco. Pliny and Attilius represent the best American values of scientific enquiry and engineering genius. The complacency of a society which ignores all the warning signs from nature while in pursuit of profit — ‘Salve lucrum!’ as they used to say in Pompeii — is not that far removed from the superpower which turns its back on international treaties on global warming.

I was even able to use some of my American research. That quote from Tom Wolfe? Five years on, it forms the epigraph to POMPEII.