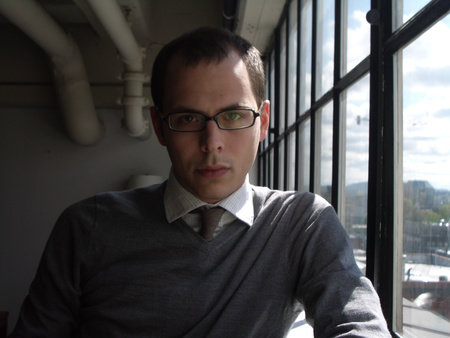 DANIEL H. WILSON is the bestselling author of Robopocalypse, Robogenesis, and Amped, among others. He was born in Tulsa, Oklahoma, and earned a B.S. in computer science from the University of Tulsa and a Ph.D. in robotics from Carnegie Mellon University in Pittsburgh. He lives in Portland, Oregon with his wife and two children.

Sign me up for news about Daniel H. Wilson and more from Penguin Random House

Guardian Angels and Other Monsters

We’ve got exclusive news from Daniel H. Wilson regarding an upcoming project with “Dope” director Rick Famuyiwa, and a major update on the film adaptation of Robopocalypse. Read on!

PENGUIN RANDOM HOUSE: You’ve got a book of short stories out.

Daniel H. Wilson: Yes, Guardian Angels and Other Monsters. It came out in March of this year.

PRH: Have you always been a short story guy, or is this just something you wanted to take a stab at after the novels?

DHW: I grew up reading short stories. I love The Magazine of Fantasy and Science Fiction, Asimov, all that kind of stuff. I always though that what I really wanted to do was write short stories. I would read them, and think of them like computer code a human brain would compile. You read these symbols in a row, and if it’s “Flowers for Algernon,” you burst into tears. If it’s “The Nine Billion Names of God,” you break out in goosebumps. I just thought it was a crazy magic trick that I wanted to figure out. I was really excited to put together all of the short stories I’ve written into this new collection.

PRH: When did you write your first short story?

DHW: I started writing them in high school. I would give them to my teacher, Paul Dykes, and he would mark them up and give me notes. I would send them away to magazines and they would get rejected. That’s how I started out. They were really dumb, in retrospect. I found them all and looked them over. Really silly stories, and pretty derivative of stuff that I was reading and loved back then.

PRH: You’ve got to get the bad stuff out of the way.

DHW: I went and studied robots for 10 years and suddenly had more to say and think about. You’ve got to practice, figure out what a successful short story looks like, and get going. It’s an art form I’ve been fascinated by.

PRH: There are some stories in Guardian Angels that are getting attention from the entertainment industry — one in particular.

DHW: Yes. There are 14 stories in there. Seven of them are brand-new and the others appeared in various anthologies. The last one in the collection is called “Special Automatic” and it is about the future of poverty and how technology can build these invisible walls around people. Once all of the rich people have autonomous vehicles and they’re going out at night to earn money like Ubers, they’re going to geo-fence off the poor neighborhoods. They’ll be cut off by technology. You see racism being built into Google AI from the very start because of human bias. It got optioned by Fox, and there’s a great director attached, Rick Famuyiwa, who directed Dope. I’m so excited. I’m adapting it and scripting it, and they’re just getting started.

PRH: I’m excited to have the news to share here. Do you have any updates on the Robopocalypse movie?

DHW: Robocalypse is never going to die. Steven Spielberg was going to direct that, and it got delayed at the last minute. They rewrote the script — I’ve seen it, and it’s awesome — and Michael Bay is going to direct it. He’s supposed to direct it after he finishes the one he’s shooting right now. Fingers crossed! I’ve had my heart broken with Robopocalypse before, but I really, really want to see it as a film. I think a lot of people do.