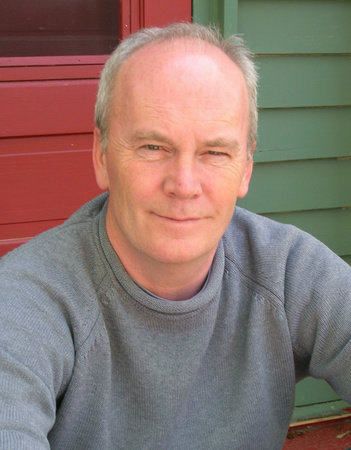 Tim Brady is an award-winning writer whose works include Twelve Desperate Miles and A Death in San Pietro. A graduate of the Iowa Writers’ Workshop, he has written a number of PBS documentaries, and helped develop the series Liberty! The American Revolution, winner of the Peabody Award. He lives in St. Paul, Minnesota.

There’s a photo of Ted Roosevelt at a boxing match in 1934 that my mind conjures every time I think of the man. It shows his striking resemblance in spirit and in looks to our 34th President, Teddy Roosevelt. In it, Ted stares into the camera amid a sea of straight faces, his smile beaming, cheeks plump, and eyes sparkling with attention. His father’s son, indeed.

It’s a miracle any child escapes the long shadow of a famous parent, let alone one who grows up roaming the halls of his father’s White House. Ted bore the responsibility of the Roosevelt name with class and grace, even if he never quite rose to the level of political influence achieved by his father Teddy Roosevelt or his distant cousin (and occasional adversary) Franklin Roosevelt.

Comparisons are unavoidable, but they don’t do justice to Ted’s own remarkable record as a public servant and brave soldier in both World Wars. His civic duties, moral compass, and buoyant personality were in keeping with the world class character that so defined the Roosevelt families on both sides of Long Island Sound.

Lest he never be judged on his own merits, author Tim Brady has written a wonderful biography capturing the life of Ted Roosevelt, Jr. Below, Tim talks about how he came to write His Father’s Son, Ted’s charming personality, his valor on the battlefield, and his row with the Hyde Park Roosevelts.

PENGUIN RANDOM HOUSE:What inspired you to research the life of Theodore Roosevelt Jr.?

TIM BRADY: I had read Rick Atkinson’s great trilogy of the U.S. Army during World War II in which Ted Roosevelt is featured in all three volumes. I also knew something of Theodore Roosevelt and the rest of the Roosevelt family from reading Edmund Morris and David McCollough, and from having John Cooper as a teacher of undergraduate history at the University of Wisconsin years ago. I didn’t know much about Ted or his life beyond what I learned in Atkinson’s work but knowing the sort of dynamo Theodore was I got very interested in the question of what it must have been like to grow up as his son. How do you cut a niche for yourself with a father whose face if blasted into a mountain in South Dakota?

PRH:Did anything shock or surprise you as you immersed yourself in Ted’s life?

TB: I wouldn’t say that anything shocked me. I think I was surprised by the continued devotion to his father’s legacy that marked Ted’s life. There were moments when his own interests might have been better served if he’d cut the cord completely but he remained Theodore’s son throughout.

PRH:It’s often said that President Theodore Roosevelt was battle-hungry because his father didn’t serve in the army. Ted certainly couldn’t point to the same reasoning. Why do you think Ted was so ready to prove himself on the battlefield?

TB: No one but a fool is really “battle-hungry” and neither Ted nor Theodore were fools. What both believed was that all citizens in a democracy should be willing to defend their country when its interests were threatened. At times, the Roosevelt’s took this conviction to overly enthusiastic extremes. They suffered the consequences, particularly in the First World War.

PRH:In what ways did Ted carry the torch of “character” that so defined the Roosevelts? Did the family legacy weigh heavily on his mind?

TB: The Roosevelt family legacy did weigh heavily on Ted. The notion of service and civic duty was engrained in him from his earliest years and he pursued that duty for most of his life in the military, in politics, in diplomatic service and through volunteer organizations. He was not, however, a slave to selflessness. Like his father and others in his family, he loved adventure, he loved a hearty laugh, and loved a good cognac.

PRH:There was friction between the Sagamore Hill branch (Teddy) and the Hyde Park branch (Franklin) of the Roosevelts, especially as Franklin D. Roosevelt ascended to the presidency. What role did Ted play in that family rift?

TB: Ted and Franklin were political contemporaries and rivals. Ted was seen as the standard bearer of the Republican Oyster Bay Roosevelt’s, while Franklin was the head of the Democratic Hyde Park contingent. Though Ted and Franklin were loosely linked fifth cousins, the fact that Franklin married Ted’s 1st cousin, Eleanor, brought them tightly together. The split began in 1920, when Franklin, who had served as Assistant Secretary of the Navy during the Wilson administration, was nominated by the Democratic as its Vice-Presidential candidate in that fall’s election. The Republican Party, Oyster Bay Roosevelt’s included, felt that Franklin and the Democrats were taking advantage of his last name to confuse voters who might assume FDR was one of the many son’s of the recently deceased and still popular Theodore. The Republican’s sent Ted out on the stump to clarify matters and he proceeded to tail his distant cousin around the country describing himself to the electorate as the “true Roosevelt.” What ensued was a political feud that would last through the rest of Ted’s life.

PRH:What limited Ted from becoming as successful a politician as his father?

TB: I think Ted’s biggest problem as a politician is that he didn’t have the righteous fire that his father did. His father always had one cause or another that he was more than willing to promote with vigor and tenacity. Aside from his own lack of political passion, Ted was a Republican in the era of Warren Harding, Calvin Coolidge, and Herbert Hoover; his party simply did not respond to the growing crises of the era in a fashion that might have enabled it to continue in power. I think Ted lacked both the political imagination and skills to help guide his party through the coming years.

PRH:What would you say is most misunderstood about Theodore Roosevelt Jr.?

TB: For all his devotion to his father’s legacy, for all his squabbles with FDR, for all the difficulties of his frontline duties and his selfless service, Ted was not a drudge. He enjoyed life, loved his wife Eleanor, his family, his home on Long Island. He liked good times with his many friends in New York and around the country. He had a brilliant smile, told great stories, quoted poetry at the drop of a hat, cared for his soldiers and was beloved by them in return.