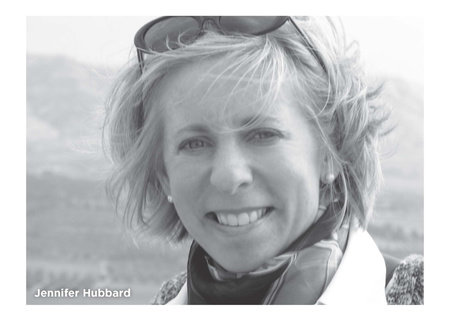 Michael L. Printz Honor Award-winning And We Stay is Jenny Hubbard’s second novel. Her first, Paper Covers Rock, was a William C. Morris Debut Award Finalist. A former English teacher, Jenny writes books and plays in her hometown of Slisbury, North Carolina, where she lives with her husband, a high school math teacher, and their rescue dog, Oliver. You can find Jenny on Facebook, follow her (and Oliver) on Twitter at @HubbardWrites, and visit her website at jennyhubbard.com.

Jenny Hubbard: The Little House series, by Laura Ingalls Wilder. I wanted to be Laura Ingalls and live by the banks of Plum Creek. I read those books eight times through — as soon as I’d finish, I’d start over again. The illustrations by Garth Williams remain as vivid to me today as any memory from my childhood does.

PRH: What inspired you to write prep school as a setting?

JH: I taught for ten years at an all-boys boarding school, and I wouldn’t trade that experience for a hatbox full of hundreds. As I used to tell my students there, we each have a story to tell about this place. Boarding schools are their own microcosms, with their own codes and rules and inside jokes and senses of humor. Fascinating. Endlessly fascinating, at least to me.

PRH: What was your favorite chapter (or part) to write and why?

JH: I loved writing Alex’s poems. When I taught at the boys’ school, I had my students compose a poem each week. The discoveries they made in the process, the heartfelt and authentic truths they were able to articulate on the page knocked the breath out of me. Alex’s poems were a way for me to honor the commitment to honest language that these boys chose to make.

PRH: Which character speaks the loudest to you? Do any of them clamor to be heard over the others?

JH: I think Miss Dovecott is the character who should be heard, but, unfortunately for Alex, he chooses to listen to Glenn instead. Some readers have criticized the novel for being set in 1982, but, for me at least, the undercurrent of male chauvinism and white-man privilege wouldn’t have buzzed nearly as loudly through the pages of that same story set today. In the early ’80s, some elite colleges and universities had barely gone co-ed, and so for an intelligent young woman like Miss Dovecott to find herself suddenly adrift on a sea of prejudice and tradition — well, she is going to have to shout to be heard, isn’t she? And she isn’t a shouter. So the one voice that speaks the truth gets drowned.

PRH: Are you working on a second book?

JH: Yes. It’s told from the point of view of three teenage girls who are witness to a high-school shooting. It’s a novel about aftermath — survival of the aftermath — rather than the sensationalism of the event itself.

PRH: What was your favorite genre to read as a teenager?

JH: Real-life fiction, a la Judy Blume. For me and many of my friends, Judy Blume was a lifesaver.