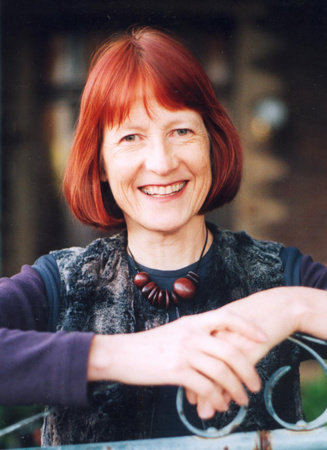 "My books grow from an idea I find intriguing. I know it’s a good idea when it follows me around like a stray dog that won’t go home."–Elizabeth Honey

Elizabeth Honey is one of Australia’s most popular authors of award-winning fiction, picture books, and poetry.

There were four Honey kids. I was number three. We grew up in southern Victoria, Australia, on a farm that my father made by clearing a large tract of coastal bush land. There were kangaroos, wallabies, lizards, possums, a startling variety of birds and snakes galore. These days I rail against the lost of habitat but back then it was different. My father was helping to forge the nation.

I was a weedy child who always seemed to have a sore throat so I wasn’t sent to school until I was nearly seven. My younger sister Mary and I played with the dogs, climbed trees and did a lot of pretending, on horses or tractors, in dress-ups or with glove puppets, round old trucks, cubbies, dams and hay sheds.

In an exercise book with DO NOT OPEN on the cover I wrote Lamp Wick and Piggy Catch a Wolf and Other Piggy Stories which I illustrated in colored pencil.

Every day after school the mantel radio in our kitchen was tuned to a children’s program called The Argonauts and my favorite segment was the book reading. I always had my nose in a book. I liked stories about kids who were resourceful and feisty like Pipi Longstocking, The Famous Five, Seven Little Australians, and Norah in the Billabong series.

Movies were another passion. If an Elvis Presley film was coming to the cinema in the closest town I’d set the table, dry the dishes and be painfully nice until someone said they’d take me.

After high school I left for the city of Melbourne, to go to art school. That’s where I met Andrew, my husband. Then followed many different jobs, and adventures traveling through Europe, South America and the USA. We lived in London for a few years. Returning to Australia I worked as a freelance illustrator and the work I found most satisfying was illustrating children’s books.

Then we had children, an excellent career move! Reading piles of picture books to baby daughter, Bea, and then son, Gig, helped me understand what children enjoy in a story. I tried my hand at writing. My first picture book, Princess Beatrice and the Rotten Robber, was published in 1988. Over a dozen books later we still live in Melbourne. Bea and Gig have grown-up and Dup, our scruffy terrier is middle-aged.

Caring for the environment is a reoccurring theme in my stories. I have to be careful not to go over the top about this, otherwise I’ll put my readers off. The character Miss Bones in Remote Man voices a lot of what I fear will happen, but you have to keep hoping. Other themes? Optimism. Holidays. Parents who like each other. Kids who enjoy themselves.

My books grow from an idea I find intriguing. I know it’s a good idea when it follows me around like a stray dog that won’t go home. New ideas attach themselves to the first idea and by the time the book is finished hundreds of ideas have been woven in. The story usually grows in my mind for a few years before I begin writing it down.

Kids sometimes ask ‘How can you write a story that’s so long?’ Well, you begin, you write one scene, then another, and another, and you just keep at it, like a jigsaw puzzle, and you don’t worry if some of it’s rubbish, you go back and fix that later.

I enjoy creating characters and giving them a voice. I’m always listening for interesting accents, slang, turns of phrase and patterns of speech. Remote Man has characters in Australia, Jamaica, USA, and France, and email and chat!

Honey Sandwich is a collection of funny silly poems mostly inspired by Bea and Gig, and other young friends and relatives, and our first dog Chugga.

Motto: No Junk and if that fails Disposal with Honor.