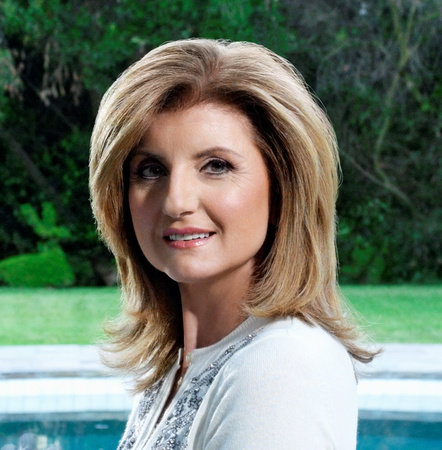 Arianna Huffington is the cofounder, president, and former editor in chief of the Huffington Post Media Group, one of the world’s most influential news and information brands. In August 2016 she stepped down after 11 years to focus on her new startup Thrive Global. She is the author of 14 books, including Third World America, On Becoming Fearless, The Fourth Instinct, Right is Wrong, and The Sleep Revolution. Huffington has two daughters, Christina and Isabella.

Pigs at the Trough

It’s likely you most know Arianna Huffington as the creator of The Huffington Post. She’s also the author of fourteen books, the latest of which – The Sleep Revolution – is a study of the sleep crisis our country currently faces, and doubles as a prescriptive solution to readers’ sleep problems. As the book landed in stores, we caught up with Huffington over email to talk sleeping pill epidemics, Donald Trump’s lack of sleep, and more.

PENGUIN RANDOM HOUSE:Let’s start with your personal relationship to sleep: You didn’t prioritize it throughout much of your professional career until you passed out from exhaustion at your desk and broke your cheekbone. A change was clearly necessary. But as a person who has accomplished so much already both professionally and personally, do you think more sleep would have helped you become even more successful had you prioritized it years ago? Less so, because you’d have lost waking working hours? Or perhaps just as successful – but much better rested?

ARIANNA HUFFINGTON: I’m often asked a question that goes something like this: “Arianna, it’s great that you get all this sleep now, but would you have had the same career if you had done this earlier in your life?” And my answer isn’t just a categorical yes – I also believe that not only would I have achieved whatever I’ve achieved, but I would have done it with more joy, more aliveness, and less of a cost to my health and my relationships. I’m living proof that once we change our minds about sleep, we can begin to change our habits.

PRH:How do you think society would fare if the majority of professionals shifted to segmented sleep, this idea of two sleep stages at night with a period of quiet wakefulness for a few hours in between?

AH: I think that would be over-correcting. Giving sleep the respect it deserves doesn’t require a change anywhere near that dramatic. What’s important is that you find a way that works for you to ease your transition into sleep each night, and also take moments to recharge throughout the day. The transition will be different for each one of us, but for me it includes a hot bath with Epsom salts, some light stretching, deep breathing or meditation to help ease my body and mind into sleep.

PRH: Where do you stand on the ten-minute power nap? Is it enough to make a difference each day?

AH: I am passionately pro-power nap! It is absolutely enough to make a difference each day. According to David Randall, the author of Dreamland, even a short nap “primes our brains to function at a higher level, letting us come up with better ideas, find solutions to puzzles more quickly, identify patterns faster and recall information more accurately.”

It’s why we have two nap rooms at The Huffington Post. There was skepticism when we first installed them in New York in 2011. HuffPosters were reluctant to be seen walking into a nap room in the middle of a bustling newsroom in “the city that never sleeps.” But now they are perpetually full, and we’re spreading nap rooms around the world, starting with our London office. And more and more companies are installing nap rooms, including Ben & Jerry’s, Zappos, and Nike.

SIG: You talk in The Sleep Revolution about meditation and how it’s helped you in your own restfulness. There’s been quite a bit said about meditation lately in the news and there are now meditation studios popping up in New York City and elsewhere. Is meditation coupled with the idea of unitasking the beginning of a backlash to multi-screen living? Can it all co-exist happily?

AH: There is absolutely a growing realization that when we spend time away from our screens and disconnect from all our devices, we’re better able to connect with ourselves. This realization is very much connected to the rising popularity of meditation, and it’s also directly related to sleep. Our houses, our bedrooms – even our beds – are littered with beeping, vibrating, flashing screens. It’s the never-ending possibility of connecting – with friends, with strangers, with the entire world, with every TV show or movie ever made – with just the press of a button that is, not surprisingly, addictive. Humans are social creatures – we’re hardwired to connect. Even when we’re not actually connecting digitally, we’re in a constant state of heightened anticipation. And always being in this state doesn’t exactly put us in the right frame of mind to wind down when it’s time to sleep. Though we don’t give much thought to how we put ourselves to bed, we have little resting places and refueling shrines all over our houses, like little doll beds, where our technology can recharge, even if we can’t.

That’s not to say we should completely banish screens from our lives – not at all. All these parts of our lives can co-exist happily, but we’ll be much happier and healthier when we find ways to connect more deeply with ourselves by taking time to disconnect from our ubiquitous devices.

PRH:As someone who dreams vividly and recalls much of what I dream about – and is baffled by them – I find the idea of dream incubation fascinating. Though you don’t partake yourself, do you think it’s really as simple as the steps laid out in your book? How actionable is it?

AH: No matter how much of the curtain is pulled back on our dreams, the mystery will remain. And while each of our dream incubation efforts will certain vary in process and results, the steps and questions in the book can bring each of us closer to experiencing our dreams more vividly and finding more clarity through preparation.

PRH:Would you call sleeping pills in our culture an epidemic?

AH: Yes. An entire industry has arisen to facilitate our attempts to get more sleep. In the United States, more than fifty-five million prescriptions for sleeping pills were written just in 2014, with sales topping one billion dollars.

There are, of course, times in our lives – a traumatic experience, the death of a loved one – when we might need some temporary help getting to sleep. But it’s important to make a distinction between turning to sleep aids at such moments and turning to them as an everyday cure for sleeplessness.

Sleep difficulties can turn into serious medical problems. For the vast majority of us, however, sleep difficulties are a lifestyle problem. Yet we tend to treat all our sleep-related woes the same way: with a pill. This is hubris on the scale of Greek mythology. We expect, as if by magic, to wrestle sleep into submission. This isn’t accidental. Combine the marketing power of the modern pharmaceutical industry with a client market that includes, potentially, every fatigued and burned-out worker – which is to say nearly every worker – and you’ve got the makings of the juggernaut that is the modern sleep-aid industry.

PRH:Also in regard to sleeping pills, what do you think is the biggest barrier to people hearing more about the dangers: personal reluctance to accept something is bad for them as we might do with other dependencies like smoking or drinking? Resistance of and push-back by the drug companies? Or something else entirely?

AH: There are many barriers, including the two you mention. There’s such a demand for better sleep, and as so many of us burn out in our efforts to keep up in today’s high-pressure, always-on world, we’ve made it easier and easier for the pharmaceutical industry to tighten its grip on us and expand its reach. Instead of questioning how we live our lives, we fall prey to sophisticated marketing that promises us health, happiness, sleep, and energy. And who wants to be the naysayer, the Luddite who rejects such progress? A great deal of ingenious and insidious brainpower, along with billions of dollars, goes into selling us a solution that doesn’t actually solve our problems but only disguises and prolongs them.

PRH:Finally, looking across the current landscape for the 2016 presidential election, who among the candidates do you think could use some sleep the most right now? And how much of the questionable behavior we’ve seen thus far at debates and rallies and elsewhere can be attributed to pure exhaustion?

And sleep deprivation is very much a factor on the campaign trail. The daily email newsletter theSkimm, in its coverage of the 2016 presidential election, asked the candidates, “How many times do you hit snooze in the AM?” (Ted Cruz hits it twice, Carly Fiorina “doesn’t have time to hit snooze these days,” and for Hillary Clinton it “depends on the morning.”) Now, of course, hitting the snooze button isn’t a sin, but if you need to do it – because you can’t get up when your alarm goes off – that’s a strong message that you’re not getting enough sleep (and the decision-making benefits that come with it). One of the persistent clichés of the presidential campaigns is the question “Would you want this person to have his or her finger on the nuclear button?” Well, when it comes to having a president operating on all cylinders, we should also ask whether we want someone with one finger on the snooze button and the other on the nuclear button.