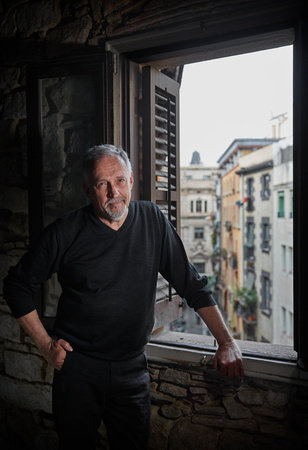 Jussi Adler-Olsen is Denmark’s #1 crime writer and a New York Times bestselling author. His books routinely top the bestseller lists in Europe and have sold more than twenty-seven million copies around the world. His many prestigious worldwide crime-writing awards include the Barry Award and the Glass Key Award, also won by Henning Mankell, Jo Nesbø, Stieg Larsson, and Peter Høeg.

What in particular triggered you to start your Department Q series?

A well known Danish film producer wanted me to do a police story much like the Inspector Beck series by Swedish crime authors Maj Sjöwall and Per Wahlöö, which are renowned in Scandinavia. My initial reaction was that I was writing international thrillers and was not interested in doing a series of detective stories. I am driven by the wish to write thrillers because what interests me is to write about preventing crime, not solving it.

My contact was certain that I should write a police series, but I maintained it would not be right for me, as the police work under loads of regulations and rules which restrict each individual police officer. Nevertheless I was intrigued and thought a great deal about how to sidestep these restrictions. When I came up with the scenario of having a police officer who was not welcome anywhere in the system and who didn’t care what people thought about him and basically just did whatever he wanted, I realized that the concept had materialized.

Are all the stories based on real events, or do you make things up?

No, none of my stories are based on actual events. I take pride in spotting stories between the lines in newspapers which have not yet become reality. This is why I have occasionally been fortunate to imagine stories similar to some that have later emerged in the news. I write in “zeitgeist” – the spirit of the present. My first Department Q story The Keeper of the Lost Causes — about a woman who is kept in a cage for a long period of time—was created prior to the breaking of the story about Natascha Kampusch, who was kept locked up for years in Austria.

The most important task for an author, in my opinion, is to open up for the thought of what is possible, but at the same time realizing that nothing surpasses real life.

Do you think about having an international audience when you write, or do you focus on your locale and not worry about your audience?

I would like to turn this question around – no one could be more interested in his readers than I. To me the reader is the most treasured colleague in my writing. Readers today are well read and they are clever – therefore as an author you have to do your utmost to make every single page, even every line, in your novel worth their while to read. You have to be generous with your stories, you must be creative as regards locations and the development of the characters, and finally you should respect the fact that many readers spend the last moments of their waking day reading your story in bed: you must make it worth their while to spoil their well-earned sleep.

I am very fortunate in that regardless of whether my readers are Japanese or American or Scandinavian or whatever I have their full attention while they read my book. I truly appreciate this. But nevertheless I would like to have access to the mind of say, a Korean when he reads about Carl Mørck’s strange exploits in an exotic, dark, and cold country like Denmark.

How many books are there in the series so far, and how many do you anticipate there will be?

At the moment I am writing the fifth book in the Department Q series. I expect this long story, which basically is the story about Carl Mørck—his life past and present—and the story of Assad and Rosa’s many different faces—will go on probably up to volume 9. But let us see what happens and what the readers think.

Do the books lose something in translation? If you think they hold up well, is it because of the strong storyline or the strong characters you’re created?

Of course something will always be lost in any translation. Quirky expressions in the language, the special sense of humor that is typical in Denmark especially the often double use of irony and play on words may get lost. But with a close cooperation between the translator and the author – which I am happy to say has been the case for me – it will be possible to translate or convert those elements to the language in question.

I have to confess that I do not read all translations carefully—my Armenian is somewhat lacking, to name just one example. But working closely with the publishing houses in the various countries, in particular with the editors who are working closely with the translators, I have every confidence that the translations will not just be good but excellent. Every author has to acknowledge that no text will suffer from one more round of editing if the editor is good at the job.

Do you think about your books as thrillers or police procedurals?

I mentioned earlier that police stories, which almost always begin with a crime and then go on to solve it, have their limitations. However, the thriller—which has its roots in classic novels such as The Count of Monte Cristo and Dr. Jekyll and Mr. Hyde—has the clear advantage that no subject is off limits. To me that opens up possibilities and gives me room for more in-depth research, which is a huge part of my motivation. I find that the reader gets involved in the story in a different way and the good old bag of tricks —which e.g. Alfred Hitchcock used, such as suspense where we know something about a person which is unknown to that person—are forceful elements which make people read faster.

And then there is the fact that thrillers are often more exciting to watch than crime movies. Who would not like to see a great thriller? Well, I certainly would.