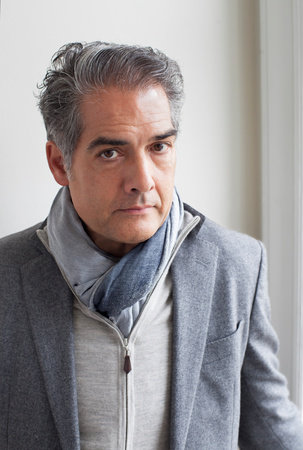 Philip Kerr is the New York Times bestselling author of the acclaimed Bernie Gunther novels, three of which—Field Gray, The Lady from Zagreb, and Prussian Blue—were finalists for the Edgar® Award for Best Novel. Kerr has also won several Shamus Awards and the British Crime Writers’ Association Ellis Peters Award for Historical Crime Fiction. As P. B. Kerr, he is the author of the much-loved young adult fantasy series Children of the Lamp.

The Other Side of Silence

The Most Frightening Story Ever Told

The Lady from Zagreb

You began your career with a trilogy of historical crime novels set in Berlin. Since then, you’ve written in genres ranging from futuristic thrillers to a children’s book. Why, after more than a dozen years, have you chosen to return to World War II?

Even when I was writing my Bernie Gunther novels, I kind of skirted around the war. I did one set in 1936, one in 1938, and one in 1947. The war informed those stories, but none of them was about the war, per se. To some extent I’ve always tried to avoid writing about the Second World War because so many other people have done it. I suppose I could never think of a story or an event that interested me until I started to read about the Teheran Conference of 1943. Most people remember Yalta and Potsdam, but no one remembers Teheran; and yet Teheran was where many of the most important decisions were made. Out of that interest came a simple ‘what if’ premise and the rest followed.

After having worked in so many genres, how has your style changed? Do you feel better equipped to tackle this subject matter than you did at the beginning of your career?

I don’t ever pay attention to genres. They don’t interest me. I could think of nothing worse than being forced to live in the ghetto of crime writing for example. If I do inhabit a genre it is the genre of telling a story. It may no longer be fashionable in these post-modern times to be interested in story, but there it is. I’m a better writer than I used to be. I know that.

Hitler’s Peace seamlessly melds the factual and fictional. In writing about historical characters like Roosevelt, Churchill, and Himmler, how true are you to their known activities and characteristics?

I do a lot of reading to try to get under the skin of those characters. To that extent, writing a novel is a little like method-acting. I hope the portrayals are very accurate. For example, Hitler is a much more articulate and compelling character than the carpet-chewing madman we think we know.

Did you have any indication that the events described in your novel could have happened, or are they strictly a product of your imagination?

Some of the events did happen. I always try to find a story in the margin of history. Between what’s known and what’s not known. Certainly there was one occasion in the thirties when Churchill almost met Hitler. And contrary to what most people believe, Hitler and Stalin had a genuine admiration for each other. The trick of writing a novel like this is to make it believable to yourself first. After that it becomes easier to convince the reader that such events as these could have happened. By the time I finished writing the book I almost wanted to ask myself why the events described hadn’t happened.

Do you describe any incidents in the book that most readers would be surprised to learn actually happened?

Yes. For example, there was the Willie D. Porter incident. The USS Iowa set sail for North Africa in late 1943, carrying the President and the Joint Chiefs to North Africa for the Big Three meeting with Stalin and Roosevelt. They nearly didn’t get there at all. A day or so out of port, one of the Iowa’s escort destroyers fired a torpedo at the mother ship, which narrowly missed. It was an accident. But it seems that American “friendly fire” is hardly a new phenomenon.

I think most people would be surprised to discover how Roosevelt decided to charm Stalin at the expense of his relationship with Churchill. At a time when we hear a lot about the so-called “special relationship” between Britain and USA, it’s instructive to remember that the special relationship all but collapsed at Teheran. President Bush holds Churchill up as an example of a great world leader; but it was Churchill’s private opinion that, at Teheran, Roosevelt betrayed him on a personal level. It might interest people to know that Churchill never attended Roosevelt’s funeral, in 1945, which might help to explain why Johnson felt no need to attend Churchill’s funeral in 1965.

As a genre, do you think alternate histories offer lessons about the past, or should they be construed strictly as entertainment?

Entertainment first. But sometimes fiction provides history’s best viewpoint. For example, you won’t read a better account of the battle of Waterloo than the one contained in Hugo’s novel, Les Miserables. Hugo was never there, of course. His account was made up. Yet it is certainly the most compelling one.

What’s next for you? Do you plan to continue writing fiction set in this time period, or will you try your hand at different genres?

Another Bernie Gunther novel, and another children’s book.