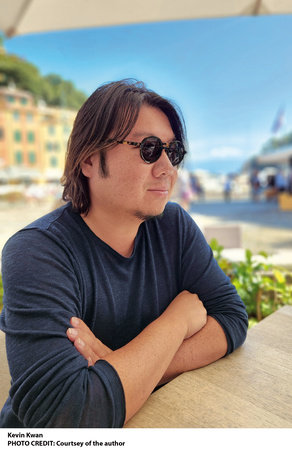 KEVIN KWAN is the author of Crazy Rich Asians, the international bestselling novel that has been translated into more than 30 languages.  Its sequel, China Rich Girlfriend, was released in 2015, and Rich People Problems, the final book in the trilogy, followed in 2017.  For several weeks in 2018, the Crazy Rich Asians trilogy commanded the top three positions of the New York Times bestseller list – an almost unprecedented single-author trifecta, and the film adaptation of Crazy Rich Asians became Hollywood’s highest grossing romantic comedy in over a decade.  In 2018, Kevin was named by Time Magazine as one of the 100 Most Influential People in the World.

PENGUIN RANDOM HOUSE: What was the thing you most enjoyed about writing Crazy Rich Asians?

KEVIN KWAN: I had such a great time constructing the world of my characters – from deciding what fabulous clothes they wore, the gorgeous spaces they inhabited, down to the delectable foods they ate. As a lover of good design and someone who lives to eat, these minute details were a pleasure to create. And just as actors always say that it’s more fun to play villains, writing the scenes with the nasty characters was the most fun for me.

PRH: What do you think readers will enjoy the most about reading Crazy Rich Asians?

KK: Different readers are going to enjoy different things. Some are going to love the material world of the book, and some are going to love the emotional world. But I hope that all readers will enjoy discovering the hidden, extremely privileged world of these families and experiencing this side of Asia that’s not often written about. I want readers to feel like they are embarking on a grand voyage as they open this book, and to be able to luxuriate in it.

PRH: What made you decide to take a step out of design and into writing?

KK: My first degree was in creative writing, so I’ve always had this dual life in design and writing. I would work on a design project one month, and the next I’d be doing travel writing in the Caribbean or Morocco. For a while, the design projects took up more of my attention, because I would be involved in these huge, year-long projects for people like Oprah Winfrey or Elizabeth Taylor. But in 2009, my father became terminally ill, and I took some time off to be with him as he went through his medical treatments. Being together during this period and driving him to the hospital every day really made me realize how precious and limited our time here is. I always had the idea for this story at the back of my mind, and so I decided, let’s just get on with it. And so I devoted the next three years to writing this book.

PRH: What did you find most challenging about staying on the inoffensive side of the satire line while writing your novel?

KK: It really wasn’t that much of a challenge to me, because I don’t think I come close to being offensive. I think sometimes satire can veer toward the malicious – as Truman Capote was accused of being in Answered Prayers – but I have no axes to grind. My goal, first and foremost, is to make readers laugh. The characters and the plotlines were created in the service of comedy, and it’s all meant to be taken in good fun.

PRH: What book will you be reading next?

KK: I’ve lately been hooked on Anthony Trollope’s Palliser series, and up next is The Eustace Diamonds. He was writing in the 1860s about the political and social elite of England. It’s a fascinating, incisive portrayal of British politics, but it’s also highly satirical and fun.

PRH: Will there be a sequel to Crazy Rich Asians?

KK: I certainly hope so! There could be so much more craziness in store for these characters.