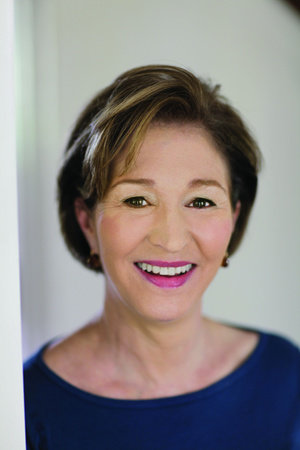 Anne-Marie Slaughter is president and CEO of New America. She is the Bert G. Kerstetter ’66 University Professor Emerita of Politics and International Affairs at Princeton University and the former dean of its Woodrow Wilson School of Public and International Affairs. In 2009 Secretary of State Hillary Clinton appointed Slaughter director of policy planning for the U.S. State Department, the first woman to hold that job. A foreign policy analyst, legal and international relations scholar, and public commentator, Slaughter was a professor at the University of Chicago Law School and Harvard Law School and is a former president of the American Society of International Law.

In her new book, Unfinished Business: Women Men Work Family, the former top official in Hillary Clinton’s State Department has a blurb that you might expect (Hillary Clinton), but also one you wouldn’t. Kay Bailey Hutchison, a former Republican senator from Texas, writes in her blurb that Anne-Marie Slaughter’s book “paves the way for women and men to be equal partners in America’s cultural and economic success.”

Slaughter, now the president of the nonpartisan New America Foundation, writes in Unfinished Business that the No. 1 thing holding back women in the workplace is the same thing that’s holding back men in the workplace and the economy more broadly: Childcare and eldercare are big, expensive responsibilities, and they disproportionately impact working women.

“We’re focusing too much on discrimination and the obstacles within the workplace,” Slaughter says, “and not enough on the ways in which the workplace doesn’t make enough room for care.”

In a wide-ranging interview with Penguin Random House, Slaughter discusses income inequality, family care, and the growing consensus around the importance of those issues as we head into the 2016 election cycle.

PENGUIN RANDOM HOUSE: Would you say that there’s a movement today that’s oriented toward changing laws and challenging discriminatory policies in court like there was in the 1970s? Or is there a different kind of movement today?

PRH: It’s a little frustrating that the public discourse about feminism is more about cultural issues — about how much Lena Dunham should get naked on HBO — than on public-policy issues like pay equity and paid family leave.

AMS: That’s partly a question of whether the feminism of the rich has diverged dramatically from the feminism of the poor. Alison Wolf writes in her book The XX Factor that there was a time in which women were sex objects but that the experience of affluent women now is very different from a woman who is not getting equally paid for her work and doesn’t have paid family leave. Part of what I argue is that the experience of being discriminated against because of your care-giving obligations is still common to many of us and that we can make common cause around that. Part of what I tried to do in this book was to find a way of talking about it — to find a set of policies that all women and that all men can get behind.

PRH: Are you concerned that the ways we talk about feminism today — talking about vocal fry or nudity or whatever — are a diversion from serious social policy that should be more central to the discussion of how we talk about men and women?

AMS: We have been focusing so much on how to get women to the top that we have lost sight of the bigger picture. Lena Dunham is pushing for these policies. The splintering of the women’s movement leaves a lot of room for creative self-expression, but you could also say that we have lost our focus on the issues that will affect the maximum number of women.

PRH: So what do you do about that? Talk louder about those things?

AMS: [Laughs.] Shifting the conversation — and not just louder but different — matters. I called the book Unfinished Business because we’ve gotten halfway here and now we’re spinning. We were closer to universal day care in 1971 than we are now. We’ve gone backwards. It’s a middle-class issue and an economic issue. We need to re-find a common purpose and drive toward that politically and culturally. Politically, I think you are seeing this from the right and the left. Marco Rubio has a paid-leave plan. Regardless of what you think of his plan, I think it’s significant that he came out with one.

PRH: I don’t see much likelihood that a Republican-controlled Congress now or after the 2016 election would move on issues like family leave and pay equity. Do you?

AMS: There are a couple of Republican versions of paid leave, particularly around earned time off. It’s an issue for some Republican women. The head of the Family Caregiving Caucus in the Senate is a Republican from New Hampshire, Kelly Ayotte. I’m not all that optimistic that this Congress can do much of anything, but these issues are on the table more than they were a few years ago.

PRH: What do you make of the fact that very few women are CEOs of Fortune 500 companies?

AMS: It is important to have more women CEOs — I absolutely believe that — but the constant focus on the Fortune 500 blinds us to how rarified that air is. That’s not the concern of the forty million American women who are either in poverty or on the brink. We’re not going to address the problems of the majority of women in this country until we focus on support for caregiving and changing roles for men.

PRH: I’m not saying hooray for 100 women if 100 more women became CEOs of Fortune 500 companies. I’m saying those women — as they have in Congress and on the Supreme Court and elsewhere — would probably have different priorities than the men they would be replacing at those companies.

AMS: I agree with that. This is both/and more than either/or. I’m all for having more women in Congress and on the Supreme Court and as CEOs — absolutely — but I’m saying that even if it’s true that women would make changes in those businesses, it’s not a substitute for policy.

PRH: Do you think Drew Faust has made different priorities as president of Harvard because she is a woman?

AMS: Yeah, I think Drew Faust has chosen deans who make these issues as a priority. Harvard Business School is now focused on the gender gap in a way that it was not before. You might not see it in her own policies — and I haven’t been a part of Harvard in fifteen years, so I no longer know — but the deans she is choosing are focusing on those issues.

PRH: What is the Great Stall that you write about in the book?

AMS: We have made enormous progress on the educational front. High school girls outpace high school boys to the point that admissions counselors acknowledge that they’re putting the thumb on the scale for boys. In college they’re doing better, and in graduate school they’re doing better. The Great Stall is between the 60/40 ratio of girls coming out of college vs. the very few who make it to the top. It’s women with caregiving obligations — mothers primarily and also women who are supporting their extended families.

PRH: Your book is not a how-to book in the way that books like Lean In are — and I’m not asking you to criticize books like that — but do you think there’s more emphasis on strategic improvements than on structural improvements?

AMS: I do, but I’ve bought plenty of how-to books. Americans are relentless self-improvers.

PRH: Do you think that is masking structural problems?

AMS: Yes, I do. The downside of being relentless self-improvers is that it does mask those larger structural forces. I talk in the book about how to have conversations with your boss or your husband, but I say too that the most important thing you can do is vote. We cannot address those structural forces one CEO, one company at a time.

It’s also a function of our larger sense of political paralysis. We feel like we couldn’t possibly get universal day care through or couldn’t possibly get paid family leave. I’m sorry, but we’ve done this before. A hundred years ago, there weren’t any limits to how many hours a company could ask you to work without paying you overtime. We found the will — Republicans and Democrats — to say that we don’t want that kind of society.

PRH: If Carly Fiorina won the Republican nomination and you were campaigning for a generic Democratic nominee, would you have any difficulty saying she had a poor record as a CEO?

AMS: I could say that, no problem. Women should be judged by the same standards as men. I have no problem saying a women is a bad anything as long as it’s true. I would judge her fairly.

PRH: Do you think it’s possible that the main issue in the 2016 presidential election will be income inequality but that we’ll call it something else — like family leave or some other policy issue?

AMS: I think we’ll talk about it as the American dream — what’s the basic bargain, how do you have a thriving middle class. If you’re a couple with children or having to take care of your own parents, you can’t do that and put money away for yourself. I don’t think of that as an inequality issue as much as the basic proposition that if you’re willing to put in the work, you should be able to afford a middle-class life.