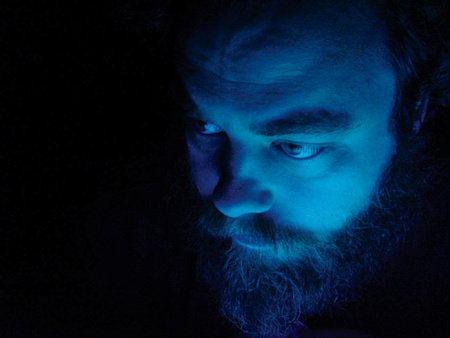 Patrick Rothfuss is the bestselling author of The Kingkiller Chronicle. His first novel, The Name of the Wind, won the Quill Award and was a Publishers Weekly Best Book of the Year. Its sequel, The Wise Man’s Fear, debuted at #1 on The New York Times bestseller chart and won the David Gemmell Legend Award. His novels have appeared on NPR’s Top 100 Science Fiction/Fantasy Books list and Locus’ Best 21st Century Fantasy Novels list. Pat lives in Wisconsin, where he brews mead, builds box forts with his children, and runs Worldbuilders, a book-centered charity that has raised more than six million dollars for Heifer International. He can be found at patrickrothfuss.com and on Twitter at @patrickrothfuss.

The Name of the Wind: 10th Anniversary Deluxe Edition

The Slow Regard of Silent Things

Rick and Morty vs. Dungeons & Dragons

El nombre del viento / The Name of the Wind

La música del silencio / The Slow Regard of Silent Things

Your first novel, The Name of the Wind introduces the hero (or some may say anti-hero) Kvothe as a larger-than-life living legend.

I don’t know if I’d call him larger-than-life. His reputation is larger-than-life, certainly. The man himself is remarkably life-sized. I think that’s part of the reason people like him.

How did you create him?

I got the idea for Kvothe after I finished reading Cyranno De Bergerac for the first time. I was completely knocked over by that character. He was passionate, arrogant, witty, clever, a fighter, a poet, a philosopher. He was compelling and interesting, and a bit of a bastard, but you loved him and felt sorry for him. I remember thinking, “Why haven’t I ever read a fantasy novel with a character this good?”

Shortly after that I read Casanova’s memoirs. That’s when I realized that autobiography could be really compelling so long as the person’s life is exciting, and their personality is interesting.

Those two things might not have been the seed for the book, they were certainly around when the seed was sprouting….

What contemporary superhero would you put Kvothe up against?

Ah hell. If we’re talking about Kvothe as he appears in the second book. Batman would probably come out on top. I’d say Kvothe would only have about a 30% chance of pulling off the win there.

But even if Batman did win, he’d walk away with a limp.

Kvothe leads readers through the entire series—from the storytelling, to the action, to the inner monologue. Are there any similarities between Kvothe and yourself?

A few. But less than people typically think. People are always saying, “Why do you hate poets so much?” I have to remind them that Kvothe is the one with that particular grudge.

But yeah. There are a few similarities. We both have the bad habit of expressing ourselves freely and clearly when it would be better to keep our mouths shut.

Fans love the books and are fascinated by the characters, but you’ve also garnered a cult-like following. Can you tell us what that’s like?

I’ve got a cult? That’s awesome. Do they have robes and stuff? Do we have baccanals? We better have baccanals. If I have cult it better old-school. Dionysian. Orgiastic. If I find out they’re just drinking tang and handing out pamphlets on streetcorners I’m going to be pissed.

When did you realize that you wanted to become a writer?

I’ve known I wanted to be a writer for a long time. Since forever. I started my first fantasy novel when I was 15 or so.

It wasn’t very good, of course. In fact, it was horrible. Beyond horrible. It had cat-man samurai in it. I’m not even kidding.

But it was a good learning experience. The mistakes I made in that novel taught me a lot about writing. Generally speaking, our failures teach us more than our successes. Part of the reason The Name of the Wind turned out so good is because I made so many rookie mistakes in that first, horrible novel.

Did any of your experiences in college influence some of the scenes at the University?

A lot of people assume that because I spent 11 years in college, I based the University off my experiences as a student. It’s a reasonable thought, but it couldn’t be further from the truth. It wouldn’t have taken me nearly so long to write this book I was just stealing things out of the real world.

The truth is, I find stories that are thinly-veiled autobiography pretty tiresome. Authors inevitably put something of themselves into a book, but that doesn’t mean you should turn your 3rd grad math teacher into a villain in a desperate attempt to get revenge. I’ve read books like that in the past. They’re terrible.

What was the best class you took in all that time?

Basic Critical Thinking. This is usually taught as a philosophy class at most universities, but in my opinion it should be required for every college student.

You see, everyone assumes they know how to think rationally, but most people don’t. We are emotional, messy-headed creatures. And even very clever, well-informed people can be very stupid when it comes to dealing with things in a rational, critical way.

I’ve had people try to have arguments with me. They say things like, “What you have to realize is that logically…” and then they spout off the most ridiculous bullshit. They don’t know what logic is. They think that if they feel strongly about something, it’s logic. They think if they grew up believing it, it’s logic.

I had a guy try to convince me that ESP was real because he was thinking about his girlfriend before the phone rang. Not only was he sure he was right, but he was absolutely certain that he was providing a crushing argument. He felt unassailable in his reasoning.

All I could think was, ‘Sweet baby Jesus. That’s a post hoc fallacy. You’re trying to convince me using faulty logic that Aristotle was making fun of over 2000 years ago.’ Maybe that shit works in whatever N-sync chatroom you grew up in. But don’t bring it round here. Here we have rational discourse. You want to sit at the grown-up table, you learn the rules.

The structure of your story is different than most fantasy novels. Why did you choose to write your book that way?

As for the first person, it’s the most natural form of storytelling there is. When you tell your friend a story, you say, “I almost got hit by a truck today.” You don’t hide behind third person.

Yeah. Sure. Most novels are written a different way. Tradition. The Aristotelian unities. Three act structure. What do I care about that? I’m not doing a paint-by-numbers here. I’m not doing a connect-the-dots. I’m looking to tell a different type of story here. I’ll do it my way.

The first edition of The Name of the Wind was released in 2007. What kinds of projects have you been involved with over the past 3 years, besides writing THE WISE MAN’S FEAR, the long-awaited and highly anticipated sequel?

I also wrote a not-for-children picture book illustrated by my friend Nate Taylor. It turned out amazing. I think of it as Calvin and Hobbes meets Coraline meets Edward Gorey.

What’s next for Kvothe and the Kingkiller Chronicle?

Actually, that’s all a lie. I don’t believe in spoilers.