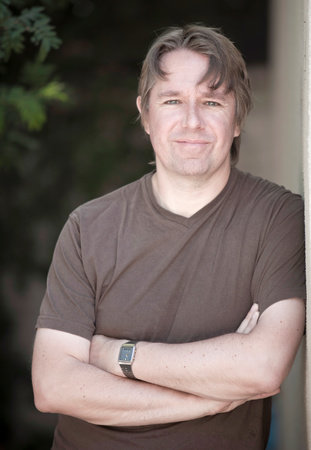 Alastair Reynolds is the author of the Poseidon’s Children series and the Revelation Space series. Born in Barry, South Wales, he studied at Newcastle University and the University of St. Andrews. A former astrophysicist for the European Space Agency, he now writes full-time.

On the Steel Breeze

Doctor Who: Harvest of Time

I’ve always loved far future SF, so it was more or less a given that I would one day want to write in that form. I’ve been enthralled by deep vistas of space and time ever since watching George Pal’s film of The Time Machine, while an early encounter with Arthur C Clarke’s The City And The Stars cemented my love for books with a scope spanning millions of years. Later, I grew to love the 1956 film Forbidden Planet, with its wonderful depiction of the vast, luminous machinery of the vanished Krell civilisation. All these influences, and many more, fed into what eventually became House of Suns.

I had—and continued to have—great fun exploring the Revelation Space universe, but it was always clear to me that I wanted to write other kinds of book, even within what might be termed the fairly narrow overlapping genre categories of hard SF and space opera. The tone of the Revelation Space books tends towards the dark and claustrophobic, with cosmic extinction lurking behind every page. The galaxy is a dangerous place, fundamentally inimical to human life, and humanity only adds to its problems by being so fragmented and fractious. In House of Suns I wanted to examine an interstellar civilisation from a different, less bracingly pessimistic viewpoint—and that meant creating a new future history. Gone are the inimical alien killing machines; the galaxy of House of Suns , while not without its perils, isn’t stalked by death and horror to anything like the degree of the universe of the Revelation Space books. The endless rise and fall of civilisations notwithstanding, it’s a galaxy more conducive to sightseeing.

I came at the book having already written a novella, Thousandth Night, set in something like the same universe of House of Suns . That story introduced Campion and Purslane, two members of a starfaring clan of clonelike individuals known as Gentian line. The clones—they’re both male and female, but derived from the template of a single individual—spend their lives zipping around the galaxy in great, two hundred thousand year long circuits, playing tourist. At the end of each circuit, they meet up to swap memories. The story introduced some of the traditions and taboos of the lines, and sketched in some of the historical background. For the novel, which I started a couple of years later, I took everything that I liked from the novella and ignored everything else that didn’t quite fit. I moved the action forward another four million years and introduced a significant new factor into galactic geopolitics: the emergence of an AI civilisation known as the Machine People. As with the novella, I tossed in just about every superscience gadget I could think of—inertialess drives, force fields, stasis boxes, and refrained from offering much in the way of explanation for how any of these innovations functioned. For the characters, who have been living with these things for millions of years, they’re as commonplace—and dull—as plumbing or double glazing. As with the Revelation Space books, I made the speed of light a hard upper limit for travel, but this time even travelling at near the speed of light is trivially easy for the “shatterlings” of Gentian line.

As might be clear from the above, this isn’t a book that obeys the rules of strict hard SF. Even without FTL travel, many of the technologies—antigravity, etc—are impossible based on what we know today, and that’s before we get to the wormhole-manipulation and stellar engineering that is the bread-and-butter of the clone lines. I tried to place reasonable limits on these technologies, however, and make sure that there were still certain feats that were beyond the abilities of the shatterlings. A character suffers a violent death, and can’t be magically restored to life—mortality is all too real, even for these long-lived characters. I also wanted to counterbalance the superscience hardware by playing fair with the scenery, so I tried to set the action in the real Milky Way galaxy, with all the structure and complexity as revealed to us by modern astronomical results. Along the way, though, I also tried to pay homage to some of those gorgeous SF paperback covers of the seventies, with their awesome, inscrutable artefacts towering or hovering over bizarre alien landscapes. And, of course, the ancient machinery of the vanished Krell…

I hope that House of Suns functions as an independent novel. To some extent, history is only just beginning as the novel closes. I had a blast writing it, and hope that some of that enjoyment shines through the text. I wanted to write a book that was forward looking in terms of the way it examined ideas about interstellar civilisation, artificial intelligence, memory and personality, but also fondly in debt to the marvellous vistas of golden age SF, when the universe truly looked as it might turn out to be our playground.