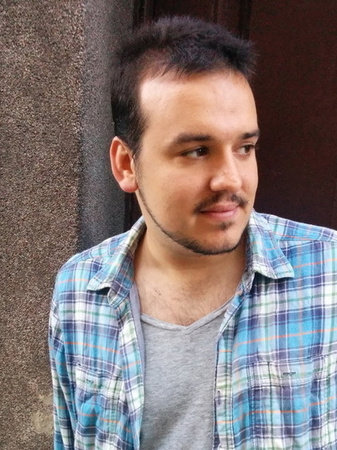 Edgar Cantero is a writer and cartoonist from Barcelona working in Catalan, Spanish, and English. He is the New York Times bestselling author of Meddling Kids and The Supernatural Enhancements. He lives in Brooklyn.

This Body’s Not Big Enough for Both of Us

We spoke with Spanish author Edgar Cantero at NYCC 2017 about his latest novel Meddling Kids: a frighteningly original story that pits a group of one-time kid detectives against the cosmic horror of H. P. Lovecraft.

PENGUIN RANDOM HOUSE: There are a lot of “Scooby Doo” references in Meddling Kids. Were they part of the plan from the beginning?

Edgar Cantero: The original pitch for the book was “Famous Five meets Cthulhu”. The Famous Five is a stand-in for every kid detective group of our childhoods. The thing is that when I pitched it to my editor, he didn’t know who they were, so I immediately changed it to “Scooby Gang” on the fly. That’s how I was able to put “Scooby Doo” references in it, too.

PRH: Did you grow up watching the cartoon?

EC: Absolutely. I have a memory of learning how to draw by copying the villains of “Scooby Doo” on the screen.

PRH: Were you ever disappointed that the monsters were never real?

EC: When I was a child, I would have gotten too scared had I seen anything paranormal happening in “Scooby Doo”. As a matter fact, most of them left me with doubt when they would say that it was all made with string and that sort of thing. I would say, “Really? That was so convincing! That candle flew!” For these kids, I wanted them to face something actually supernatural for once to see how they would handle it.

PRH: Would you have been a good kid detective?

EC: I tried to be a kid detective, of course. Most of us have tried to form our own detective clubs. The thing is that criminal activity in our areas doesn’t live up to the challenge, right? That’s why I was also envious of these detective kids: They found criminals, but the ones they found weren’t too dangerous. They didn’t find a human trafficking ring. They always found money forgers, and sheep smugglers, and that kind of stuff. I envied them for that.

PRH: Something unnatural is happening to your kid detectives, but do they know that when they first get involved in the mystery?

EC: The book starts when a group of kid detectives have grown up. They’re in their twenties when they realize that one case they thought they had solved when they were about 12 years-old might not have been as simple as they thought. They caught a man in a mask, but something else might have also been happening. They have to face that not coping with what they saw may have really messed them up as adults.

PRH: What makes them finally face up to it? Why not keep avoiding it?

EC: They’ve been avoiding it for 13 years, but the thing is that the lead of the book realizes that those days were the only time she was happy in her life. The thing that she can do is solve mysteries with her friends, and after years of drifting around the country and failing at everything, she decides that she can’t turn her back on that anymore. She has to solve the case and find some closure.

PRH: There are monsters in the book, though: not just a guy in a monster mask.

PRH: What are some of your favorite supernatural creatures?

EC: I have a thing for the classic literary monsters: Frankenstein, Dracula, werewolves, that kind of stuff. One of my favorite supernatural villains was Mr. Dark from Something Wicked This Way Comes, by Ray Bradbury. He is more adult-oriented. When you grow old, that is when you start becoming aware of what that guy could do.

PRH: When you get older, you start having adult fears about things that really could happen.

EC: When I was a kid, I was scared of supernatural stuff. When you become an adult, you go through a spiritual crisis or whatever and that’s when you start longing for some significance. If I found a ghost, I would be scared, but on the other hand, think of the cosmic implications.

PRH: There are cosmic implications for what your investigators discover, too, and not all of them are good, Will you be revisiting this universe? Could you see yourself writing more supernatural fiction?

EC: It has become a theme in the two books I’ve written in English, so far: Someone who came across something supernatural once and how they reacted to it. Do you turn your back on it? Do you move on? Do you become obsessed with it? It’s as close to the meaning of life as you get. I don’t think I’m going to write anything specially with these characters and this universe, but again, I think this theme is pretty universal. I don’t think that the universes of Meddling Kids, and The Supernatural Enhancements, my previous book, are incompatible. Who knows? Maybe they’ll cross paths.

EC: I would rather see it as a live-action series, but yeah, why not? As long as the dog doesn’t speak, I’m fine with that.