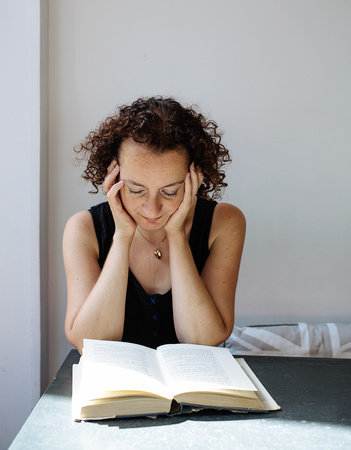 Samantha Ellis is a playwright and journalist. The daughter of Iraqi-Jewish refugees, she grew up thinking her family had travelled everywhere by magic carpet. From an early age she knew she didn’t want their version of a happy ending—marriage to a nice Iraqi-Jewish boy—so she read books to find out what she did want. Her plays include Patching Havoc, Sugar and Snow and Cling To Me Like Ivy, and she is a founding member of women’s theatre company Agent 160. She lives in London.

How to Be a Heroine

In How to Be a Heroine: Or, What I’ve Learned from Reading Too Much, author Samantha Ellis quotes wisdom by Nora Ephron: “Be the heroine of your life, not the victim.” In this witty and heartfelt memoir, Ellis turns to the great heroines of literature – from Lizzie Bennett, to Scarlett O’Hara, to Anne of Green Gables, to the sisters in Little Women (and to the women who created them) – for wisdom in navigating the plot twists of her own life. We caught up with Ellis, a journalist and playwright who lives in London, to chat about her favorite heroines, what she’s learned from these timeless characters, and which book made her want to be a writer:

PENGUIN RANDOM HOUSE:The book opens with a gentle argument between you and your best friend over whether you’d prefer to be Jane Eyre or Cathy Earnshaw. “My whole life, I’d been trying to be Cathy, when I should have been trying to be Jane.” What draws you to each of these characters, and why the change?

SAMANTHA ELLIS: Well, originally I was very much a Cathy girl. I liked her wildness, her passion, her refusal of convention. When my best friend said she was selfish and a snob and ruined everyone’s lives, I was angry at first. But it made me go back to Jane. I’d always thought Jane was stoic and dull, but she’s full of fire, sticks to her guns and knows who she is. I still have a soft spot for Cathy, though; she can be petulant and violent and cruel, but as an awkward teenager, I needed a bit of her anger and even her selfishness to pull me out of myself and make me feel bolder.

PRH:Some of the stories you visit are not quite as you remembered them from when you read them as a child or teenager. You write at one point: “I’m beginning to think all readings are provisional, and that maybe we read heroines for what we need from them at the time.” What did these characters give you at certain moments in time, and what was the thing that surprised you most in returning to these heroines?

SE: They were all different. I thought I loved The Little Mermaid because, like me, she faced impossible obstacles in her quest to marry a prince. But when I went back to her, this didn’t resonate nearly so much as the fact that once she leaves her home under the sea, she becomes an exile on dry land, a refugee from her former life, and is always homesick, but can never return. As a child of refugees, this really resonated. Then, another example was Lucy Honeychurch from A Room with a View; I liked the bit in that book where she’s banging away at the piano and her friend, the clergyman Mr. Beebe, says if she only lived as she played, it would be very exciting. I wanted to live as I played and I thought this meant I shouldn’t just be a writer but should, somehow, live an artist’s life. When I went back to the book, I found this wasn’t how she saw her life at all; she didn’t want to be a top pianist, or to live an artist’s life. But I realized there were other things I could learn from Lucy, about living honestly, and loving honestly. And I started to have a lot of sympathy for the book’s shadow heroine, Charlotte Bartlett.

PRH: Can you talk a little about how your background, growing up in a tight-knit Iraqi Jewish community in London, helped you relate to many of these heroines?

SE: The women in my community were all very strong, brilliant women, but I didn’t always realize that. I didn’t want the life they wanted for me – marriage to a nice Iraqi Jewish boy – and I didn’t know what I did want, so I read books to find out. I wanted to find out other things that women could do, to find other role models, and I found them on the page. It was only later that I realized how heroic the women in my family actually are.

PRH:Do you have a favorite heroine, or one who has inspired you the most? Is there one that infuriates you the most?

SE: I change all the time! I like to think of my heroines as my team, so I don’t have to choose favorites. But the one I was saddest to go back to was Katy Carr in What Katy Did; I found that book incredibly depressing in the way it depicted suffering as a necessary rite of passage, and I don’t know if I’ll be able to read it ever again.

PRH:How have these heroines, or their authors, shaped your life as a writer?

SE: Anne of Green Gables made me a writer. I was always told I had an overactive imagination, and then I found her, and she did too, and she used it to become a writer, and I decided I would too. Marjorie Morningstar made me love the theater; I am (mostly) a playwright. And recently I’ve been very inspired by Scheherazade, the heroine of One Thousand and One Nights, who saves her own life, and those of the women of her kingdom, through storytelling.

PRH:Your desire to be a writer runs strong throughout this memoir, and you have experience as a journalist and a playwright. What was the process of writing a memoir like? Are there any similarities to writing a play?

SE: I began this book almost by accident, but once I’d started, I really enjoyed writing it. It was lovely to have more room (plays are so much shorter than books) and to write in one voice rather than the voices of several characters. When I did a reading of some of it last year, an actor friend of mine said it was a dramatic monologue, so I suppose that’s one similarity. One big difference was that I realized I’d forgotten all my adjectives! In the kind of plays I write, they don’t come up that often, as the dialogue is fairly realistic and simple. So that was hard … but I like a challenge and I have a very good thesaurus.

PRH:What is the most valuable lesson you have learned from “reading too much”?

SE: I think Nora Ephron was right; it’s important to “be the heroine of your own life, not the victim.” I’ve often felt muddled and unheroic, but my heroines taught me to try to get past the stories other people write for me, and never get trapped in fictions of my own making; to try to write the story of my own life, not on paper but by living it.