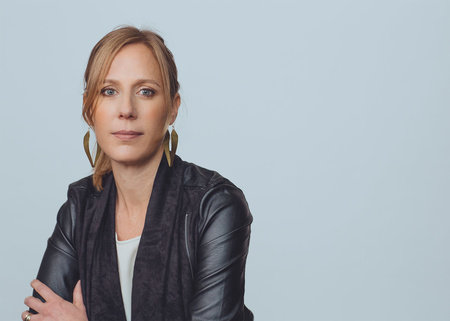 Sarah Sentilles is the author of Breaking Up with God, A Church of Her Own, and Taught by America. A graduate of Yale University and Harvard Divinity School, she lives in Idaho’s Wood River Valley.

In her new book, Draw Your Weapons, Sarah Sentilles offers a unique perspective and provocative meditation on art and war and the intersection of both. Touching on moments in time from the Holocaust to Abu Ghraib and working in what she’s learned during her time spent with former military people, with students, and others, Sentilles dissects the role of art and the visual in the psychology of violence. On the eve of her book’s release, we corresponded with Sentilles to talk about where we go from here and more.

PENGUIN RANDOM HOUSE:You touch on the intersection of war and faith often in Draw Your Weapons – “baptism” by waterboarding, Bible verses inscribed on USMC rifle sights, and so on. It’s such a tangled knot in this world today. How does one even begin to understand distinctions among widely held assumptions about other faiths, when so much of what we see is indeed caught up in violence?

SARAH SENTILLES: For me, the only way to evaluate faith-claims is by their effects. How do your beliefs shape how you move through the world, how you treat your neighbors, how you treat your enemies? Belief shapes behavior. If we think God killed God’s son to save us, then that will influence how we understand violence. If we think God is all seeing, then that will shape how we understand other all-seeing devices, like drones. If we think God is on the side of the oppressed, then that will shape how we understand resistance and struggles for justice. I had a professor in divinity school who used to say that asking whether or not God exists is the wrong question because it’s not one we can ever answer. But the word “God” does exist, he’d say, so the challenge is to ask what work that word is doing in the world. Whose bodies does it affect and how? What difference does it make? Who does it harm? Who does it help?

PRH:There’s something disturbing about the phrase “war tourism,” which you dedicate a chapter to, as it brings the connotation of spectacle to war sites. Certainly, there’s a distinct difference between paying one’s respects and site as spectacle, as you imply by talking about both War Zone Tours and the Minidoka Pilgrimage. And then, of course, the Yolocaust Project comes to mind. Is it up to the gatekeepers to keep these sites from being disrespected? Is there some odd benefit to exploiting these places? Where should gatekeepers of these places draw the line when it comes to what’s permissible?

SS: I wrote the “war tourism” chapter after I heard a story on NPR about a travel company that brings tourists to dangerous sites, including warzones, and I became obsessed with it. I told a friend how unethical I thought it was, and she asked, “But what’s the difference between visiting a warzone as a tourist and watching a warzone on television?” Her question blew my mind. What is the difference? Does looking at other people’s pain always bring the accusation of voyeurism? Sometimes looking can be a form of disrespect – but other times looking away can be a form of disrespect. I taught courses on ethics and photography for about a decade, and my students and I spent hours and hours debating who has a right to look at whose images – and what good or what harm our looking does. Recently, I reread a book by Ariella Azoulay called The Civil Contract of Photography, and that book convinced me I was worried about the wrong questions. What matters is not whether you look or even how you look; what matters is what you do after you see. The Yolocaust Project is fascinating in its exposure of people’s inappropriate behavior at sites that memorialize atrocity – but I think part of what’s so disturbing about these photographs of people doing handstands and taking selfies at Holocaust memorials is that so many of us act like that all the time. On my cellphone’s newsfeed is a photograph of the aftermath of a bombing or the video of Philando Castile being killed by the police – and there I am, right next to the images, cooking eggs. That’s the challenge: How do I let images of violence change my life? How do I make myself responsible for and accountable to people in pain?

PRH:You talk about the “aestheticization of violence – turning the suffering of others into an image, into something beautiful to look at.” Not only do we gaze upon these photos, but we award them and laud those who set out to capture these images. Certainly there’s incredible merit in photojournalism. Do we take it too far though in that we also judge on the basis of composition, color, and beyond? Or is it all a necessary part of this kind of eyes-on-the-ground package?

SS: Susie Linfield’s The Cruel Radiance: Photography and Political Violence changed my thinking around questions about the aestheticization of violence. If it’s somehow wrong or unethical to take a well-composed photograph of suffering, Linfield asks, then is the solution a crappy snapshot? For Linfield, focusing on finding the perfect image of pain – an image that isn’t too beautiful or too exploitative – is a way to let ourselves off the hook as viewers. It’s a kind of narcissism, she argues, that makes looking at pictures of other people in pain all about the viewer. Looking at pictures of violence is an imperfect activity; it will always be fraught, complex, impure, she writes. But that’s not an excuse to look away.

PRH: The section about phantom limbs and the use of mirrors to help ease associated pain was fascinating. You quote Oliver Sacks: “If the phantom is extinguished, its pain must also go.” Are there other applications to this idea that come to mind?

SS: Your question makes me think about how the idea of a phantom is connected to the postcolonial idea of a phantasm: the invention of the “other,” which is a figment of the imagination. When Algeria was colonized, for example, the colonists brought photographers with them, who wanted to take pictures of Algerian women, pictures they could then send home to confirm their imagined ideas about the “other.” But when the colonial photographers arrived, most of the women were veiled – hidden from the gaze of the camera. So the photographers paid models to pose in their studios in ways that fit the colonial imagination: topless, in harems, oversexualized, etc. We do this to one another all the time. People with power create phantom “others” so they can justify how they treat those “others.” But the phantom reveals more about the oppressors than the group they are oppressing. If the phantasm were revealed to be a projection, an invention, a figment of the imagination, might that help eradicate structural racism, for example? And maybe it works the other way, too – maybe we could have “phantasms for good,” meaning you first have to be able to imagine a better world to help bring it into being.

PRH:It’s possible that we are on the brink of war today, with various enemies at the gate. As the fear creeps in about what is to come, what do we do? Do we look to the past? Protest this possible future? Simply stand by and speculate and then reflect?

SS: I think we’re well over the brink of war. We’re waging wars in many countries – some conflicts declared and others undeclared, hidden, covert. And there’s a war going on right here at home against anyone labeled “other” – people of color, women, immigrants, LGBTQIA communities, people with disabilities, and the list goes on. Part of the work is refusing the image of the “enemy” that’s being offered and asking critical questions about who you’re being taught to fear and how that fear might obscure both the real danger and possible peaceful solutions. Throughout Draw Your Weapons, I wrestle with how to live in the face of violence that feels as if it can’t be stopped. Before this election, I wasn’t quite sure what to do. The problems of the world felt too big, and I felt too small. I wanted my philosophical disagreement with war and racism and sexism to be enough. But it’s not enough. The challenge is to use my privilege to engage in concrete actions on a daily basis to support those most at risk. No matter for which issue I choose to fight – more just immigration laws, environmental policies that care for the earth, restorative justice policing – there is work to be done, and it is best done in community.