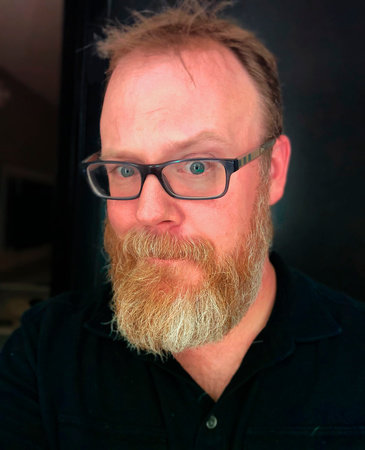 Chuck Wendig is the New York Times bestselling author of Wanderers, The Book of Accidents, and Wayward, and over two dozen other books for adults and young adults. A finalist for the Astounding Award and an alum of the Sundance Screenwriters Lab, he has also written comics, games, and for film and television. He’s known for his popular blog, terribleminds, and books about writing such as Damn Fine Story. He lives in Bucks County, Pennsylvania, with his family.

The Book of Accidents

Chuck Wendig is the author of 20 novels and counting, plus a good handful of non-fiction books on the craft of writing, comic books, screenplays, and even a game or two. We asked Wendig how he finds time to do it all at New York Comic Con 2017.

PENGUIN RANDOM HOUSE: How do you find a good balance between doing the things you want to do and the things you’re expected to do, keeping food on the table being one of them. Got any tricks for that?

Chuck Wendig: Yeah, I mean, I just stare longingly at my mortgage statements and I figure that out (laughs). No, as a writer what I’ve learned through this process — it’s been five years and about 20 books, I’m doing okay — is that most of the books I’ve had out have been based on things that speak to me about something. They were books that I cared about, and I wanted to write them. I didn’t worry about what was salable or marketable. That’s not to say that you can’t think about these things, but I think that at the end of the day, you worry about yourself as an audience first based on the assumption that there’s an audience out there that is adjacent to you that likes the things you like. When it comes to writing the book, I’m speaking to those people.

PRH: Is that important? Finding your crowd?

PRH: What do you have out right now that you’d like for people to know about, and what are you working on?

CW: The fortieth anniversary Star Wars anthology From a Certain Point of View came out. Coming up in two weeks is Damn Fine Story, which is a book of storytelling advice. It is about the architecture and structure of narrative, and why we tell stories. The fifth, penultimate Miriam Black novel, which is about a girl who can see how you’re going to die when she touches you, The Raptor & the Wren, lands in January. I’m finishing up the first draft of a novel titled Exeunt — although that name is going to change, probably — which is a sort of Station Eleven meets The Stand epic horror novel. That’s with Del Rey, and I’m excited to get that out there.

PRH: You don’t seem to stick to one genre. Does that reflect your personal taste or is it more of a marketing decision in the sense that you want to cast a wider net? What does the Wendig home media library look like?

CW: It is kind of scattershot. It is “painting with shotguns” time for me. The genre that I like to write in is the “me” genre. I want all of my books to feel like ones that I wrote, no matter what genre they are in. I paid very strong attention to the authors that I love: How are they dealing with the writing life? What do they say about that? One of the things that I learned is that the authors who got branded into a single genre early on were less happy. If someone was branded into crime, but wanted to break out and write some fantasy or horror, then that’s harder for them. The editors may not buy those books, and they might have to come up with a new debut pseudonym, or whatever. The authors who diversify early, whether that’s in terms of multiple genres or different formats — you know, comics to film to self-publishing to regular publishing — have a more fortunate career. Maybe it takes them a little longer to build a maximum consensus on their work, but once they do, their audience will follow them across genre lines.

PRH: You have a story in From a Certain Point of View. What was it like to reach out and bring some of these minor characters to life? You’re really adding to the canon, once more!

CW: Well, technically, we’re not adding to the canon, because that’s the whole thing. All of the stories are from a certain point of view, and some of them don’t even agree with each other. I’m tackling the bartender from the cantina, Wuher. I joke that the misconception about the prequels was that they were designed to help bridge the gap between Anakin Skywalker and Darth Vader, but to me they were just an explanation for why Wuher hates droids so much. That’s why I wrote that story.

PRH: Do you find yourself doing these kinds of what-ifs in your own head? Ever look at a minor character in a movie or TV show and wonder what’s going on in his or her head?

CW: Really good ones, absolutely, because every character is a rabbit hole, and you either break an ankle on it or fall down into it and see where it goes.