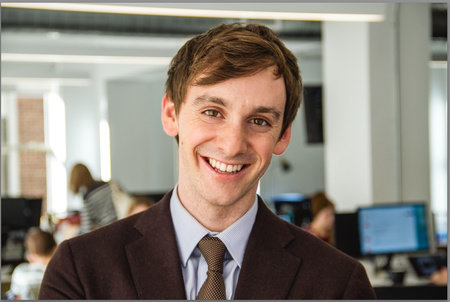 Derek Thompson is a senior editor at The Atlantic magazine, where he writes about economics and the media. He is a regular contributor to NPR’s “Here and Now” and appears frequently on television, including CBS and MSNBC. He lives in New York City.

Why does everyone suddenly care about that? Why is it that in 2012, several years after calling anybody over the phone became distinctly uncool, radios around the world were peaking with “Canadian Idol” third-placer Carly Rae Jepson’s bouncing refrain Hey I just met you, and this is crazy, but here’s my number, so call me maybe?

Why — by some stroke of genius, or fate, or some force more esoteric — did George Lucas’s self-described western set in outer space, “Star Wars,” become a $40 billion cultural empire? And what happened sometime around the turn of the millennium that sent a legion of Emmas to conquer that chic ground of of-the-moment names once held, so many decades before, by all the Ediths?

In Hit Makers, Derek Thompson, a senior editor at the Atlantic, sets out to discover what makes a cultural product a phenomenon. From French impressionism to “Seinfeld” to the dating app Bumble, success, Thompson finds, is messy. Nonetheless, there are commonalities: hits should be good, but they don’t have to be great; they should be new, but not so new no one knows what they are; and as much as they need a bit of luck, they also need a lot of broadcasting. Recently Penguin Random House reached Thompson on the phone to talk about what he learned and how this phenomenon impacts cultural creators.

PENGUIN RANDOM HOUSE: We often think that hits can be kind of random, but you show there are actually a lot of commonalities among them.

DEREK THOMPSON: The seven-word thesis of my book, I suppose, is that familiarity beats originality and distribution beats content. A lot of times people assume the most successful cultural products are successful because they are so wonderfully original and purely because of their qualities, but in fact if you study the history of pop culture success stories it turns out that familiarity is significantly more important than originality.

We love new songs that sound like old songs; we love new movies that are sequels, adaptations, reboots; we love political essays that express in a brilliant new metaphor an idea that we’ve already intuited. Raymond Loewy, the great industrial designer, called it MAYA, Most Advanced Yet Acceptable. You want to make things that are a little bit challenging, but open a door that people can walk through and feel like they know already what’s inside.

PRH: One of the things I found really interesting and surprising that you talk about in the book is that the idea that things go “viral” is a bit of a myth, right?

DT: Yea, let’s take two products. Let’s take a Super Bowl ad and an online article, like this one. One-hundred fifteen million people watch the Super Bowl advertisement and as a result it becomes incredibly popular. But we don’t call that viral. We understand that it is just a very simple, old-fashioned broadcast.

But let’s say this article gets posted on the Reddit homepage and eventually someone clicks on it there and shares it with one friend and that one friend sees it and maybe sees that a couple of other people are talking about it and says, oh, wow, this article went totally viral. But no. It hit the front page of Reddit, which is read by millions of people, and that’s a broadcast.

PRH: What do you see your book meaning for creators?

DT: I wanted to write a book that had self-help elements, but was not a self-help book primarily. My feeling about cultural markets is that it is a little bit like the weather. We know a lot about climate and the weather. We used to think that it rained because God was upset with us. Now we know how rain forms and at what temperature it freezes. At the same time, it is difficult to predict the exact temperature of your zip code two weeks ahead of time, because weather is a chaotic system.

There are people who have tried to write books that tried to say, here’s the formula to making anything a hit. If I did that, I would just be lying. Formulas and codes are for garage doors — 2942# and then the garage door opens. But pop culture success isn’t a garage door, it’s more complicated than that.

PRH: How much do you think the creator should focus on really creating from that auteuristic perspective of this is what I want to create, the world be damned versus bringing in some of these elements that do tend to make hits, hits?

DT: I think there are two answers to it. The first answer is that I am not trying to tell artists what to do. This is a book about popular markets and that’s not everybody’s goal. The second thing I’d say is, even with the caveat in point number one, even the hipster auteurs out there should probably aim for a bit of familiarity with their audience, and here’s the reason why: Even the most brilliant pieces of work often connect to people because they snap onto that audience’s latent feelings about the world and themselves, which is to say that even sometimes the strangest and bravest works often work because they are a little bit familiar.

PRH: But you also uncovered in the book that this impulse to create something that people will recognize can have some negatives. You brought up chauvinism in film.

DT: One of the reasons why the book is clearly not strictly a self-help book is that I try to be explicit about the fact that many of these so-called self-help prescriptive pieces of advice actually have really dangerous consequences for culture at large. If audiences just like what is familiar, that argues for just giving them what they’ve already seen and the consequences in film can be a little bit dangerous, because if audiences have expectations of female and male characters that are gendered, and biased, and prejudiced, and sexist, then Hollywood becomes an enabler of these sexist biases.

There is some evidence that we’ve seen in film that audiences don’t like it when strong female characters are simply too strong. But if you simply said, well audiences are really familiar with slightly weak female characters who rely on men to guide them, we shouldn’t make them too powerful or strong, we would never move anywhere as a culture. Art has the freedom to show us the world as it should exist, rather than the world as it merely exists. But in order to use that freedom, you have to be willing to take a risk and not follow audiences blindly.