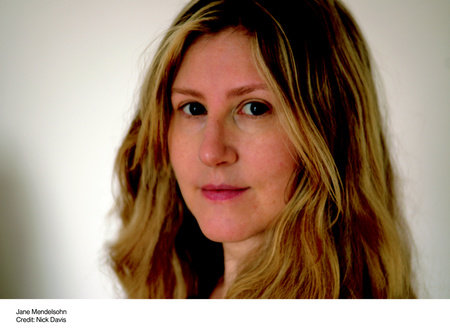 Jane Mendelsohn is the author of three previous novels, including I Was Amelia Earhart, a New York Times best seller and a finalist for the Orange Prize; Innocence; and American Music. A graduate of Yale, she lives in New York City with her husband and children.

I Was Amelia Earhart

While many readers look to fiction for an escape from reality, others turn to fiction for a more complicated look at the world around us. Fiction offers a space for deeper analysis of the characters and events that loom large in society. And while many people were blindsided by the 2016 election, signs had been pointing toward its conclusion for some time. The written evidence could be found in novels as well as newspapers.

Years from now, there may be some who will not believe that Burning Down the House was written prior to the Trump administration. For the record, author Jane Mendelsohn is not an oracle. The 2016 book, which focuses on a real estate scion’s family and that family’s professional and personal tragedies, was entirely a thing of fiction. However, as any good writer can do, she possessed the ability to gauge the direction of the country, its obsessions, and its vices. The economic bent toward globalism, the pull of personality in business, and the way in which these forces lead to horrific enslavement such as sex trafficking drew her to write this novel.

This same creative vision inspired Mendelsohn to write the 1996 New York Times bestseller I Was Amelia Earhart. Her poetic style embraces larger-than-life figures, weaving a portrait that ensnares the reader. What she does best is capture the essence of a historical moment and personality through the power of fable. Channeling their grief, their ambition, their tenderness, and their ruthlessness through the bonds they share with others, Mendelsohn’s work presents a holistic glimpse into the lives that shape our times. I was pleased to correspond with her about Burning Down the House on the occasion of its paperback publication.

PENGUIN RANDOM HOUSE:Burning Down the House is a powerful novel that tackles a wide range of subjects – sex trafficking, globalism, development, real estate empires, entrenched family drama, addiction, and ambition. What inspired you to write a novel with such enmeshed issues? What is it about these issues that you felt they would be best addressed collectively through these characters and their complicated lives?

JANE MENDELSOHN: The Zane family is a crazy planet of its own. A fictional family, with all its varied and intense emotional relationships, seemed a good way to write about the complicated, interconnected problems of today. The Zanes are a mirror – in some ways exaggerated and hyper-real – of a time of upheaval and extremes. I was trying to write about what it feels like to be alive in this moment of cataclysmic change. I wanted to write a story in which the reader could take a journey through a plot that embodied this sense of chaos and find at the end a kind of strength in uncertainty.

PRH:It’s impossible to avoid comparisons between your novel’s real estate patriarch Steve Zane and Donald Trump. Could you talk about the two men, comparing their similarities and differences?

JM: I wrote the book before Donald Trump was a prominent figure on the political scene, but many of the issues that led to the rise of Trump were present in the world, and I felt an urgent need to write about them. Steve Zane is a larger-than-life real estate mogul in New York whose domineering personality sets off a chain of events within his family that unleashes the worst dangers inherent in his empire. When I wrote the novel, such a scenario bordered on the fantastical. But sometimes we can see things in fiction that are not yet clear in reality.

While I wasn’t thinking about Donald Trump, I was thinking about globalization, international real estate, and the financial crisis and how these issues intersect with everyday life. I was thinking about the state of the world, which felt more uncertain and disconnected than I had ever experienced. I sensed a raw feeling of impending disorder.

PRH:Steve is a deeply judgmental figure whose loyalties bind him in ways both good and bad. What or who would you say is his moral compass? What does family mean to Steve? How does he weigh family against profit?

JM: Steve’s moral compass leads him to draw a line regarding what degree of exploitation he will accept within his empire. While this may be commendable, it turns out to be insufficient to save him or those he loves. His controlling, judgmental personality leads him to alienate members of his family, overestimate his own ability to shape events, and underestimate the damage.

PRH:Neva is a mercurial figure in the book. She puts a human face on the atrocity of sex trafficking. Rather than focus on the wealthy Zanes who occupy the center of your novel, what made you choose to open your book with Neva’s early history? How does she come into her own throughout the course of your novel?

JM: In spite of her circumstances, Neva is a figure of strength and compassion. She’s the moral center of the book. Her horrific experiences from the mountains of Russia to a New Jersey strip mall to the Upper East Side are a kind of fable of survival. I opened the book with her story to ground the book in her perspective, the point of view of an outsider entering the exclusive world of the Zanes, and to show how in today’s world our lives intersect with those of people from such remote places and different experiences all the time.

Over the course of the book Neva gets caught up in Steve’s world and finds the strength to fight what’s most awful about it and save what is good. She’s a mythical creature, in a way, the presiding goddess of the story who also grows in power. She comes into her own by facing the darkest part of Steve’s world as well as the darkest part of her own past and conquering it.

PRH:While you had no idea that Donald Trump would become president when you wrote this book, what points were you trying to make about the state of American society? What conclusions do you make today?

JM: When I wrote the novel, the world seemed so paradoxical – it still does. The extremes of poverty and wealth, of power and exploitation, and the concomitant disappearance of the middle, not only economically but in sensibility – the lost feeling that we can find a middle way between the divide – all seem to be rising in direct proportion to the very forces which could, in theory, bring people together: technology and globalization. Living in New York, in many ways at the center of these problems, I sense them acutely. What I was trying to say about the state of American society is that it was in peril, that we were in danger of “burning down the house.”

Maybe I was sending a flare, a smoke signal. Literature can’t really solve the problems, but it can warn, alert, heighten awareness. I was trying to find a solution, a way the individual can navigate such a world. The answer for Neva, for Felix, and for Poppy at the end of the novel is the age-old answer: strength and compassion, inner resolve and empathy.

PRH:Steve’s seventeen-year-old niece Poppy reminded me immediately of characters ranging from The Great Gatsby’s Daisy Buchanan to Serena van der Woodsen from “Gossip Girl.” She’s a glamorous and soulful but damaged young woman who doesn’t see the point in attending college. Her ambition directs her to a mentorship under her uncle then an internship on Broadway with Ian. How does Poppy speak to her fellow millennials and their distaste for convention? What does her impatience say about the world she inhabits?

JM: Poppy’s impatience speaks to her dissatisfaction with a society that has become distorted. Instead of healthy competition, Poppy sees a ruthless battle. Eventually, she moves from impatience and despair to a more productive energy. Her distaste for convention remains, and we can hope that this propels her to build a life she finds meaningful.

PRH:Steve has several sons, but two stand out. Jonathan is a manipulative and disloyal young man who wants to best his father as a means of winning his love. Felix is a cerebral and patient boy whose reflective nature is in many ways the novel’s saving grace. Could you speak about the pull these characters have on their father as well as Poppy and Neva?

JM: Jonathan and Felix represent two poles, neither of which Steve can really understand. Steve is blind to Jonathan’s disloyalty because it’s the result of the pain Steve has caused him, pain Steve can’t acknowledge. Steve can’t appreciate Felix’s gentle wisdom because it’s so unlike his own savvy intelligence. Each son represents a way of being that Steve has split off from himself; they are his blind spots: emotional pain and a spiritual grace.

Steve has many strong, impressive qualities but his inability to grasp the emotional pain he can inflict or understand the power of gentleness are tragic flaws. Steve possesses love and loyalty, but his lack of feeling or understanding limit his love and twist his loyalty. Poppy is all feeling. Neva achieves a balance of these qualities.

PRH:Given your previous best seller, I Was Amelia Earhart as well as Burning Down the House, you demonstrate a fascination with the charge that certain historical figures bring to their unique historical moment. What other figures pique your interest? If you could choose any moment in American history that deserves a closer look, what would it be?

JM: So many historical figures and moments interest me. Right now, however, I find the present riveting.