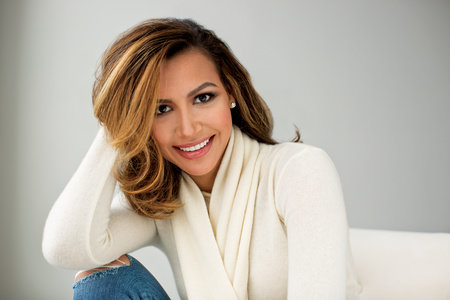 Naya Rivera is an actress and singer from Valencia, California. For six seasons, she played Santana Lopez on the hit show Glee. As a child, she appeared on Family Matters, The Fresh Prince of Bel-Air, and The Royal Family. She now lives with her husband, son, and two dogs in Los Angeles.

The casual fan may be under the impression that Naya Rivera got her start on “Glee,” playing sass queen Santana Lopez. In fact, landing her role on “Glee” was a much-earned payoff after years of hard work navigating Hollywood, adolescence, and adulthood. Rivera’s mother was an actress, and from the time she was born she was being taken on auditions. Rivera landed her first big role at the age of four, playing Hillary Winston on 1990s sitcom “The Royal Family.” But maintaining an acting career that began at the age of four proved to be no small task, and Rivera ran into countless bumps along the way (the first big one: puberty). In her memoir, Sorry Not Sorry, Rivera reveals the many twists and turns she traveled on her way to stardom, and what she learned from them. Read on for our short interview with the triple threat.

PENGUIN RANDOM HOUSE: What made now the right time for you to write your memoir?

NAYA RIVERA: I started the process of writing my memoir over a year ago. Writing has always been a passion of mine and being a published author was always a bucket list goal for me. I believe that everything happens as it should so I can’t really take credit over the actual timing of it all, but I’m certain that it’s all working together for good.

PRH: An actress herself, your mom began taking you on auditions at a very young age. Do you ever wish you’d gotten the chance to choose to become an actress (or not to become one)?

NR: I sometimes wonder if there would have ever been a moment when I “chose” acting as a career path, and I find myself thinking that at some point I would have naturally fallen into it on my own. I feel blessed to have been able to do what I love and am good at from such a young age. (Thanks mom!)

PRH: In your memoir, you open up about an abortion you had while filming “Glee.” What made you decide to talk about it now?

NR: Writing about such a personal time in my life was definitely a difficult decision. But I ultimately felt like this book was the perfect platform to share it in. It gave me a forum to express my thoughts and feelings on the matter in a way that was “on my terms” and hopefully would be conveyed to my audience the way I intended.

PRH: How have your financial struggles growing up influenced the way you plan on talking about money with your own children?

NR: I’ve learned a lot about money in my almost thirty years of living. And I think the fact that I’ve had so many ups and downs in that department will help me to teach them all aspects of the complicated subject of money.

PRH: You write that everyone expected your memoir to be a gossip-filled tell-all (which it isn’t), but you also aren’t afraid to name names when necessary. Did you ever worry about backlash post-pub?

PRH: You say you feel as though you were destined to end up on “Glee.” Where do you think you would have ended up had you not auditioned for the show?

NR: I probably would have made my way through college and pursued writing or journalism. But lucky for me I get to do both now!

PRH: Do you have any words of advice for young people struggling to follow their dreams?

NR: I know it sounds cliche, but never give up. No matter what you want to do, always know that there is nothing stopping you from doing it except maybe yourself. Don’t stand in your own way, and make sure you do what you love!