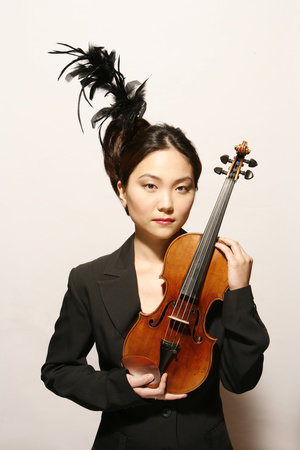 MIN KYM, born in South Korea and raised in the UK, began playing the violin at the age of six. At sixteen, she became the youngest ever foundation scholar at the Royal College of Music; at twenty-seven, the first recipient of the Heifetz Prize. The legendary conductor Sir Georg Solti praised her “exceptional natural talent, mature musicality, and mastery of the violin.” Her Sony recording of the Brahms Violin Concerto with Sir Andrew Davis and the Philharmonia Orchestra was released in 2010. She lives in London.

In her moving memoir Gone, Min Kym explores each stage of her life with great speculation and transparency. We trek through Min’s life with her as she relives the highs and lows in her story of love, loss, and of course, music.

Min began playing the violin at the age of six, and was instantly mesmerized. She excelled in music, but soon realized that with great talent comes great responsibility. As a child prodigy, Min’s adolescent experiences strayed far from the norm, and in her writing, she speaks truthfully about what it was like to grow up feeling isolated, with crushing expectations. As she transitioned into adulthood, Min faced new challenges but found comfort in music. And when she found her soulmate — a 1696 Stradivarius — Min felt that every painful experience from her past was worth it because she had found her life’s meaning in the sound and feel of this beautiful instrument. And then it was taken from her, and everything changed.

We had the chance to talk with Min about her memoir, and discuss certain aspects of her journey before and after losing her Stradivarius. Though the violin was valued at a whopping 1.2 million pounds, it’s worth was beyond that for Min. It was her. It was irreplaceable.

PENGUIN RANDOM HOUSE: In Gone, you write that being a prodigy is both extraordinary and harmful at the same time, and that it left you with “scars.” What would you say to parents of gifted children as they push their children to pursue their talents?

MIN KYM: In Gone, I wanted to write an honest account of my childhood with all the highs and pitfalls that come with being a child prodigy. For any child who shows early aptitude, it can only go one of two ways. Either you pursue potential or you don’t — and there are no guarantees. But the right attitude is key, in both success and failure, and I think that is the vital area to nurture.

PRH: How did you handle the transition from being a child prodigy to being an adult musician?

MK: In some ways I feel like I’m continuing to make that transition and that is a good thing. The wonderment of a child’s mind, the constant ability to see the world afresh and imagining different possibilities is something to hold onto. But of course there is no substitute for life experience and that is what you bring to the music as an adult. Sometimes your view of a work can change dramatically because of something you have experienced in real life, which brings you closer to the composer’s own life experiences.

PRH:In the beginning chapters, you explain that there was a cultural divide between you and your parents. How did your distant relationship with them affect your performance as a musician?

MK: When you walk on stage, you are on your own in the sense that you cannot take your parents with you! Growing up I felt that I was treading two worlds, or even three — the world of music, home life and school life. Music became the one in which I felt the most at home, and where I felt endless possibilities. I don’t regret immersing myself from such an early age for a moment. For me, music has the ability to express things beyond words and is as vital to life as food and water and air.

PRH:Do you believe that a bond with music as deep as your own can be obtained by someone who is not a prodigy? Or by someone who isn’t even a musician at all, but is simply an avid listener?

MK: Yes, absolutely! I think if you love music, then you are a musician.

PRH:You explain that your Stradivarius became a part of you— you describe it as your soulmate. Do you feel that this strong connection to an object is something that is exclusive to the arts? What is it about the arts that creates such a magical, unbreakable attachment?

MK: When I first picked up a violin, I felt that it wasn’t just part of me, it was me. Learning to navigate my fingers around the violin was like learning to speak and formulate worlds — it was a voice. Like a dancer using their body to express art, the violin becomes an extension of your body — you are inseparable, it become part of your heart and soul. You are not only equals, you are as one.

PRH:How did you fill the void when your violin was stolen? What was it like to play a different violin for the first time after your Stradivarius was stolen?

MK: The shock of the theft sent me into a sort of limbo land and I realised how much of my life I had invested into music and relationship with my violin. I suddenly found myself questioning my very existence. What was it all about? Up till then, it had been about music and the violin, no question of it. And with my violin gone — remember that it was not only the tools of my trade, my career, but also my entire life’s savings and more — I was reduced to my most vulnerable raw state.

Like finding a new partner after years of familiarity, it took a while to tune into a new violin. The thing about a violin is that you have to learn its nature and change your playing in order to coax the best out of it as it will never change for you. I played on a few violins after the theft of my beloved instrument but it never felt quite right. Then last year, I found one that clicked. Seven years after the theft. The right violin is not easy to find. They can look tick all the right boxes, sound right, look right. But to feel right — well, doesn’t happen very often.

PRH:If you had to sum up what the sound of your Stradivarius was like in one word, what would it be?

PRH:If you could, would you go back in time and choose to never acquire your Stradivarius, knowing that one day it would be taken from you? Or would you choose to relive the heartbreak?

PRH:What are your plans for the future? Do you think you’ll ever perform for large crowds again?

MK: Absolutely! Recently I performed Brahms Concerto in London which marked a turning point for me as it was the last piece I ever recorded on my Stradivarius, and the first time I played it again on my new violin. Being a musician is a way of life, and it has been my life since the age of six when I first picked up a violin. Even if I wanted to, I couldn’t switch it off!

PRH:What advice would you offer to a musician who is struggling to provide for him/herself?

MK: Making mistakes is inevitable and a valuable way of learning. Trust that inner voice of intuition, it is your most authentic guide.