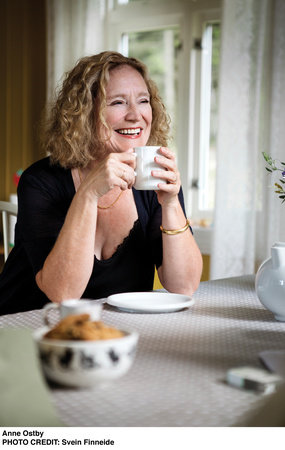 Anne Ostby is a Norwegian author and journalist. She has written children’s books, YA, and adult books. Pieces of Happiness is the first to be published in the United States, and is translated by one of her three daughters, Marie. She presently resides with her husband in Myanmar, having lived in Denmark, Malaysia, Pakistan, Kazakstan, the USA, Iran, East Timor, and Fiji over the last twenty-five years.

Anne Ostby’s new novel, Pieces of Happiness, is a delight. In it we meet a group of old friends – five women in the golden years of their lives – who have a one-of-a-kind opportunity presented to them: to meet one of their group in Fiji and work on a cocoa farm together. On the eve of the book’s publication, we caught up with the author to talk about place, preparation, writing, and more.

PENGUIN RANDOM HOUSE: In your novel, Pieces of Happiness, five old friends come together to work on a cocoa farm in Fiji. I must ask: Why cocoa, and why Fiji? (Both sound delightful, by the way.)

ANNE OSTBY: First, the “why Fiji?”: I lived there for four years, and am forever in love with the friendliness of its people, the simplicity of life, and the quiet, underlying respect for nature and the environment.

And why cocoa? Cacao farming has a long tradition in Fiji, and I felt it would create a deeper connection between the characters and the island. Even more importantly: I wanted the characters to engage in something stimulating to the senses; something for them to experience as well as the reader.  What better choice than chocolate?

PRH: If you were to embark on an adventure like this with a small group of friends, what qualities in those friends would you look for to make them the ideal partners in such an adventure?

AO: I would choose friends who would be prepared to rough it a bit. I know from decades of experience that “exotic” and “exciting” also often mean “strenuous” and “demanding.” They would need to be self-sufficient and able to tackle surprises at every turn. Most of all, I’d look for people who are appreciative of every little sliver of beauty, every little piece of happiness that comes their way. Sharing such moments of joy is what creates and maintains true friendships.

PRH: The women in Pieces of Happiness are all coming to terms with their aging selves in their own ways. What have you personally found most inspiring about the process of growing older in life, with each passing decade? Is there a favorite year you’ve lived thus far?

AO: I think the most liberating revelation of growing older has been that you actually don’t have to be good at everything, not even at most things. I’m good at something, and that’s quite enough – I’ll focus on that.

My favorite year? Maybe our Kazakhstan years in the late nineties, when the children were young and challenges were very concrete and day-to-day. Also, I turned forty during that time, and realized I was fine with that.

PRH: Your character Maya is passionate about literature and always has at least a few books on her nightstand. What books are currently on your own nightstand?

AO: Right now, it’s The Fishermen by Nigerian debut author Chigozie Obioma. It’s a Cain and Abel-inspired story of four brothers dealing with hope and tragedy, and it reflects the story of Nigeria itself. I’m also trying to keep up with my book group at home in East Timor (Southeast Asia). I’ve just purchased The Conductor by Kiwi writer Sarah Quigley. That’s next on our list. It’s a novel about a conductor whose orchestra is tasked with playing Shostakovich’s Seventh Symphony, which is to be relayed via loudspeaker to Nazi troops on the frontlines during a brutal Russian winter. The combination of obsession and commitment to art in a time of war is very compelling.

PRH: You’ve lived all over the world. What, from your perspective as a writer, is the best part of having gotten to call so many countries “home?”

AO: Living in so many different countries over the last twenty-seven years has provided me with settings for several books. Staying in a country for two to four years has allowed me to gather intimate knowledge of people and the environment, culture, and customs. I’ve found that this is an essential requirement if you want to convince a reader to come along with you: If the reader believes in your setting, he/she will be much more likely to also “believe” in your (otherwise totally fictional) story and agree to join you for the adventure.

PRH: You are a journalist. How has that influenced your fiction writing?

AO: My background in journalism taught me that writing is, at least to me, not mainly a question of “inspiration” and “creative flow.” More than anything, it’s perseverance: Keep plodding through the parts that you know are less than perfect, because you might write a truly beautiful paragraph on the next page. You can always go back and rewrite the weaker passages later.

PRH: If a young writer were to ask your best advice on sticking to writing and writing well, what would you offer?

AO: My advice may seem boring, but hopefully it’s useful: Quantity. Write a lot. You’ll have to dig through heaps of rubble to hit a speck of gold. And don’t expect the first finished draft to be the final version: Never underestimate what a good editor can do for your work. A great writer-editor chemistry will lead to the fruitful rewrites that in the end will bring out the very best story.