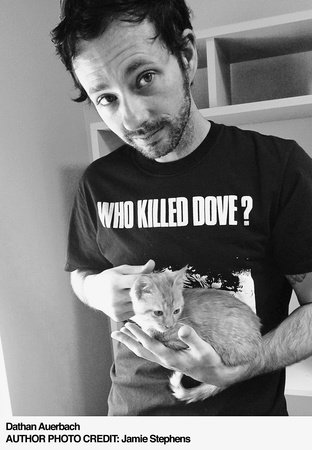 DATHAN AUERBACH lives in Florida. He is the author of Penpal.

We got the chance to interview Dathan Auerbach, author of Bad Man, about his experiences in becoming a writer, finishing his book, finding inspiration, and more.

PENGUIN RANDOM HOUSE: Could you tell us a little bit about yourself and how you got into writing? When did you


know you wanted to be a writer?

DATHAN AUERBACH: Dumb answer, but I think I knew I wanted to be a writer as soon as I started writing. Like most everyone, I grew up reading comics and novels, watching TV and movies. For me, the best part was always talking to friends afterwards, being shown what I’d failed to see for myself, talking about why one thing happened instead of another, arguing about what might come next. And of course, going on endlessly about how I would have done something better.

I never thought about being a writer, though. Not until I found the right venue. Back in 2011, the subreddit r/NoSleep was tiny but still full of great stories. It was probably a lot rougher around the edges then, but I don’t think that was a bad thing; it felt real sometimes. More often than not, maybe. I read tons of those stories before I felt the itch to write one myself. The community was so supportive all around (still is, by the way), that the biggest fear I had was that no one would care about what I submitted. I figured that was a risk worth taking, and so I did.

About halfway through that first story – “Footsteps” – I realized that I loved writing. I didn’t have any thoughts or aspirations or dreams attached to that sensation. It was just a feeling. But sometimes that’s all it takes.

PRH: How long did it take to finish your book? How has it changed since you first began

DA: Bad Man took me about three years to finish. It actually started as part of a short story collection I wanted to write. The core of the story was always the same. Most of the beats are the same. And some details aside, the current ending is the one as what’s in the very first draft.

I’ve lost some characters along the way. I had this really great janitor in the story for a long time. Unfortunately, he didn’t really do much except entertain me, so I had to fire him from the book.

Other characters have stepped aggressively out of the background where they once lived. There’s a police officer in the book who’s integral to so many things that happen I can’t imagine it any other way. I’ll read the book and think, “Well, yeah of course he is. Just look.” But then I remember that he didn’t use to be, that originally he loomed more in one of the character’s mind than he did in the story itself.

PRH:Do you have any specific or strange writing rituals that get you into a groove?

DA: Never really thought about it, and now I’m way more aware of myself than I wanna be. Turns out I do have some rituals that I’ve only just become aware of. First, you wanna drink some (read: tons of) coffee. Next, open your laptop and hope that Windows hasn’t encountered a fatal error. Since it has, you’re gonna want to reboot and have more coffee. After you get the Word doc opened, you find your place and try to make sense of the notes you left for yourself. Meanwhile, fire up Spotify and shuffle your playlist. For me, it’s mostly music without vocals. A lot of synthwave stuff that I find good for writing – Carpenter Brut, Perturbator, Occams Laser, Dynatron. Or more chill tunes from people like Kyo Itachi or DRWN..

Once everything’s all set, go ahead and take a break.

PRH:Which three books would you bring with you to a deserted island?

DA: I’m gonna try to answer this without being cute about it. So, I won’t say something like The Essential Ellison or The Collected Works of the Entire World. I’ll try to pick standard type books.


First, I’d take House of Leaves by Mark Z. Danielewski. This is a puzzle disguised as a book, something that manages to physically represent its themes and contents through its presentation. It’s maddening, confusing, weird, and unnerving. It’s a work of art. I think I could return to this book over and over again to find new things even if I wasn’t looking for them.

Watership Down by Richard Adams would be in the same bag. It’s the right combination of whimsy and weight for me. The society, customs, lore, and characters are so deeply interesting that you can’t help but extend the tale beyond what’s provided, even though it wants for nothing. My dreams about what might have come before and after the story will be good company. Its heart will come in handy when mine falters.

The Divine Comedy by Dante Alighieri. I know it might seem like I’m throwing this on the list to seem deep, but here comes the twist: I’m bringing it because I think my understanding of it is too shallow, and now I’ll have nothing but time. I know the gist, of course. I see the journey of the soul. But poems are very challenging for me. I often find them hard to understand, compositionally and syntactically. I’m just not good at reading them. But there’s a profound beauty in this one that I can already see, even with my dim abilities. I’d like the opportunity to see it more clearly.

PRH:In your opinion, has there ever been a movie adaption better than the original book?

Most recently, I think the first book of the Southern Reach series Annihilation worked better as a movie. Even setting aside some of the narrative differences, I think you needed those visceral and jarring visuals as part of the depiction of that world and what happens in it. It was one of those times where I found myself going, “you know what? My imagination is not better than what I’m being shown right now.”

PRH: Which three authors would you invite to a dinner party and why?

DA: Tough one. Mostly because I don’t really like dinner parties.

Scott Snyder would be fun to talk to. He wrote (among tons of other things) the New 52 Batman, which I loved. I think he really understands and respects who that character is; or at the very least, he showcases what happens to make Batman and his whole existence compelling to me – his unrivaled skills as a detective, the nuances of his weaknesses. I’d love to hear him talk about his approach and what he thinks about other runs.

Cormac McCarthy because I think he’s a genius. Tone and atmosphere are two of the most important things in literature and also two of the most difficult to set. McCarthy is an absolute master. The descriptions themselves are often beautifully written, but his language is also performative. You feel the brutality of the environment through the curtness of the sentences themselves. I think that’s amazing. Also, it might make it easier for me to tell what he thinks of my dinner party.

Finally, H. P. Lovecraft gets an invite because cosmic horror is just so incredibly dope, and he’s its architect. Fear explored through the incomprehensible is such treacherous and unstable ground to write on that I think it’s a wonder it ever took form at all. Still, despite all that he built, it’s said that Lovecraft never believed in himself. I struggle with the same thing, as I’m sure many people do. While I like to picture him continuously trying to lead the conversation in the insane direction of mental gateways to nightmare dimensions, truly I think the contrast between his storytelling sensibilities and the literary dispositions of the other guests (and myself) would probably make for a profoundly interesting and bizarre conversation. Plus, his outrageous and horrible views on race would distract from the fact that I forgot to prepare food for my own shindig.

PRH: Do you have any advice for young writers?

DA: I’m a little hesitant to tackle this question, because I feel like I still need advice. What’s that thing about the blind leading the blind? “When the blind lead the blind, everything’s fine”? That might not be it.

I guess one piece of advice I’d offer to new writers would be that you shouldn’t be afraid to scrap your work, that it’s okay to gut your own stuff. I know how hard it can be to let go of something you’ve toiled over, whether it’s a chapter or even a page. How disheartening it can be to cast it off. But when you spend too long trying to finesse, whether it’s phrasing or story, you might actually just be shining shackles. Of course, it’s hard to know when that’s the case, but look for it. Sometimes the best thing you can do for yourself is acknowledge that you’ve missed the mark and try to hit it again. It’s not always a great feeling, but it’s not as daunting as it seems. There are lots of words out there; try some new ones.

PRH:What is your favorite thing that you have received in the mail?

DA: If we’re talking about things in general, then probably a 7” called A Million Scars by the band The Riffs. Me and a couple buddies had been in what I’ll call a long, friendly throat-cutting grind to find a copy. There were only 500 pressed, so we were always working with garbage odds. I found one in decent condition on eBay and thought I had it in the bag, but some deranged apparent billionaire wouldn’t back off, so that copy slipped away. I did finally score one for myself – found it buried in some massive lot listing on eBay and talked the seller into peeling it off for me. Good stuff. The cherry on top, though? That moneybags madman? Turns out that had been one of my buddies, a verified nonbillionaire who had to pay double because we’d been bidding against each other on that first copy. Sometimes second place feels better.

If we’re talking about things in the mail from fans or readers, I don’t really get much of that. There is one standout, though. A few years ago, a middle school teacher assigned my first book Penpal to his class and had his students write an extra chapter. He showed me some of them. Pretty cool stuff, ideas about where the story might have gone or background tales about things unseen in the original tale. There were a couple submissions, though . . . Look, Penpal leaves a lot to the imagination. A lot of things are implied. These kids, I guess, wanted more detail, so they served it up themselves. Unnerving stuff. Definitely a favorite.