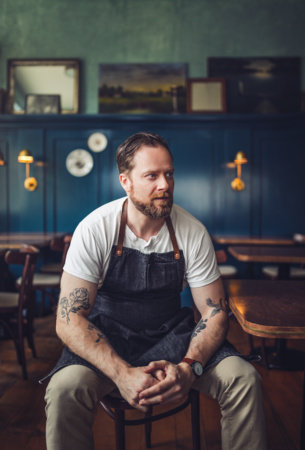 J-C POIRIER began his culinary career in Montéal, Québec, under Chef Normand Laprise, quickly moving up through the ranks at Toque! In 1994, J-C moved to Vancouver, working with Rob Feenie and Marc-André Choquette at Lumière, before opening the award-winning Chow restaurant in 2007. In late 2013, J-C and his team opened Ask For Luigi, a casual and intimate Italian-inspired restaurant. But the food of his home province was J-C’s true passion, and he opened St. Lawrence in June 2017 to great fan-fare. Located in Railtown, Vancouver, St. Lawrence spotlights both classic French dishes and J-C’s favourite recipes from his childhood in Québec. Since launching St. Lawrence, J-C has led the restaurant to rave reviews, critical acclaim, and numerous accolades including: Best Restaurant and Best New Restaurant at the 2018 Vancouver Magazine Restaurant Awards; the No. 4 spot on enRoute magazine’s 2018 list of Canada’s Best New Restaurants; and Chef of the Year, Best Restaurant, Best Gastown and Best French titles at the 2019 Vancouver Magazine Restaurant Awards. The restaurant was also singled out for the No. 2 spot on the 2020 compilation of Canada’s Top 100 Restaurants, after being ranked No. 20 on the 2018 list, and was named as one of Monocle magazine’s 50 Favourite Restaurants in the World in its 2019 Drinking & Dining Directory.

Where the River Narrows