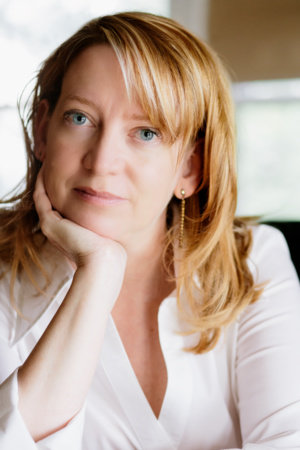 KATHERINE HEINY is the author of Early Morning Riser, Standard Deviation, and Single, Carefree, Mellow, and her short fiction has appeared in The New Yorker, The Atlantic, and many other magazines. She has lived in London, The Hague, and Boyne City, Michigan, and now lives in Bethesda, Maryland, with her husband and children.

How to Give the Wrong Impression

In 1992, Katherine Heiny, debut author of Single, Carefree, Mellow, submitted her first story to thirty-one magazine editors around the country – and received thirty-one rejections in response. The New Yorker was not one of that number, and so with nothing to lose, she mailed the story in on a Thursday; editor Roger Angell called her the next day to tell her the story was accepted.

Now, two decades following that fateful publication, Heiny’s debut collection has been published to widespread acclaim. The stories in Single, Carefree, Mellow visit the lives of several women who seem anything but what the title suggests – they all have romantic attachments, though these rarely provide satisfaction, and generally the women feel a long way from carefree or mellow. But the stories have a lot of heart, and are full of frank observations and recognizable characters. We caught up with Heiny to discuss the stories, her relationships with her characters, and her writing process.

PENGUIN RANDOM HOUSE: Single, Carefree, Mellow follows several women at moments in their lives when they are struggling in some way with love, family, friends, or work (in other words, life). What was it like writing these stories and giving voices to all these women? Was there a specific inspiration behind the book?

KATHERINE HEINY: I didn’t set out to write a book about infidelity – and in many stories, the infidelity was something I added in order to be able to say what I wanted to say about the character. The book took shape as I assembled it – there were some stories with male protagonists that I didn’t include because I thought that would disturb the balance. Giving voices to the women in the stories was a pleasure – they all appeal to me in different ways.

PRH: One character in particular, Maya, struck me as particularly interesting. At times it seems like she’s settling for the mate she chooses, Rhodes; at other times, it seems like she’s made a good bet since he has a sturdiness about him that maybe some of her other love interests lack. Maya’s story is the center of multiple stories in the collection. Did this character and her stories come to you all at once, or did she evolve as you wrote her? Did anything surprise you as you wrote Maya’s story?

KH: I wanted to write a story about my dog dying, but that sounded really boring, so I thought I’d make it a double loss for the protagonist – her pet and her relationship. That’s the story that became “SCM” and it was surprising to me that they stayed together at the end. A friend of mine read it and said, “I give them a dog year together,” but I thought, Hmmm, maybe Maya should stick around. I think she knows on some level what a good thing she has in Rhodes. I wrote “Grendel’s Mother” because I realized I had more to say about Maya and by then I was in love with Rhodes and his family. “Dark Matter” was actually the third story I wrote. There are other Maya stories but I didn’t include them in the collection. I think people either love Maya or hate her, which is what everyone says about Howard Cosell.

PRH: Do you have any favorite stories in your collection, or any characters you are particularly attached to? Did any characters come easier than others?

PRH: In the acknowledgments of Single, Carefree, Mellow, you thank editors from various publications for rescuing your work from the slush pile, including Roger Angell of The New Yorker. Can you talk about that experience, as well as your own persistence as a writer? You also thank your editor, Jenny Jackson, for “taking up permanent residence in [your head].” What was your collaboration like?

KH: I added two stories to the collection after Jenny had already acquired it, and that was an odd experience – I felt like I was writing for her personally, like we were the only two people who were ever going to read these stories. It was so important to me that she love them. That’s when she was in my head the most.

PRH: Recently in The Millions, you are quoted as saying: “[Writing] is such an important part of my identity. When I’m not writing and people ask me what I do, I feel like such a fraud … it’s also a coping mechanism – a good one. Nothing so awful can happen that I can’t write a story about it.” Any advice for writers? What are your own writing habits?

KH: Oh, God – advice? I might be the wrong person to ask. Someone once told me that there were a million ways to screw up your career as a writer, and I found that oddly comforting. I guess I looked at the flip side and figured there were a million ways to have a career as a writer, too. You have to find what works for you, I think, and not get all discouraged by reading about some author who gets up and writes twenty pages a day. (Actually, I wonder if anyone does that, or do they just say they do it?) There’s a quote from E.B. White that I particularly like: “A writer who waits for ideal conditions under which to work will die without putting a word on paper.”

PRH: You’ve been published widely in literary journals for many years, and now your debut short story collection is receiving widespread attention. What has this experience been like for you?

KH: It’s so strange! When you publish a short story, you only hear from people who like it – actually, only from people who love it, they’re the only ones who bother to get in touch. They usually tell you exactly what the story meant to them, how it spoke to them – it’s a very personal connection. Having a book reviewed is the opposite of a personal connection, even when the review is excellent. Reading a review is kind of like hearing everyone talk about you at you funeral.

PRH: The love lives of many of these characters aren’t easy – there is a lot of heartache, loss, and discontentment. If these women were real people, would you have any advice for them?

KH: Well, there’s nothing I like better than to be consulted by people about their personal lives. Though I probably don’t give very good advice, because I always jump to the worst-case scenario and say, “Think how awful it would be if your husband found out!” And then I write a story about it. Really, it’s amazing I have any friends left at all.