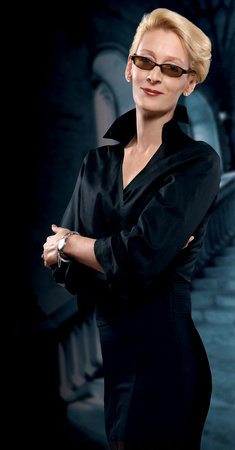 J. R. Ward is the author of more than thirty novels, including those in her #1 New York Times bestselling Black Dagger Brotherhood series. She lives in the South with her family.

Sign me up for news about J.R. Ward and more from Penguin Random House

Dearest Ivie: A Novella Set in the Black Dagger World

I love the Brothers. There I said it! I love the Black Dagger Brotherhood, all couple thousand pounds of leather-clad, hard-headed, testosterone-infused male vampires who live in my head.

I get asked alot who my favorite is and I guess it’s like children, you don’t really single one out because they’re all in your heart. I will say there are some who I haven’t gotten along as well with during the course of writing a book *cough*V*cough*, but I truly love them all equally, just in different ways.

Wrath was the first of the Brothers to turn up in my head and he was the one who showed me the world of the Black Dagger Brotherhood. The thing I like best about him is summoned up in the beginning of Dark Lover (pg. 3): "With a face that was both aristocratic and brutal, he looked like the king he was by birthright and the solider he’d become by destiny." I love that combination of a blueblood who’s also a fighter and I think he makes a perfect leader for the vampires- fortunately, when Beth came into his life she helped him realize this as well!

When it became clear that Rhage’s would be the second book in the series, I wasn’t thrilled. There was something too perfect about Hollywood: all those blond beautiful looks and those blue eyes and that sex appeal left me curiously flat. Boy, though, did I have a change of heart when I started writing about him! As I’ve said before, what warmed me to him was the way I saw his curse play out in his life and in his heart. He suffered from the burden of his earlier impulsiveness and his egocentricity, and he proved that he had changed when he sacrificed so much of himself for his love, Mary. I think one of my favorite exchanges in Lover Eternal is the one when he meets her for the first time and hears her voice (pg. 61): "Rhage shivered, a balmy rush blooming out all over his skin. The musical lilt of her voice, the rhythm of her speech, the sound of her words, it all spread through him, calming him, comforting him. Chaining him sweetly." What I love about this is it has nothing to do with what she looks like. It’s all about her voice and her soul. And from that moment on, the Brotherhood’s infamous playboy is hers and hers alone.

No other Brother has gotten to me like Zsadist did and still does. To this day, I still haven’t reread Lover Reawakened because there are scenes in it that I simply can’t bear to go through again. If you’ve read him, you know exactly why: To see an innocent get turned into a savage as the result of cruelty- it is just so very sad and enraging. Curiously, though, his story with Bella is maybe my favorite because his return to his ‘humanity’ is especially poignant given the emotional distance he had to travel to get there. In my opinion, he is the best hero I’ve ever written thus far- and I may well look back at what I hope is my long career and still feel the same way.

I knew from the instant Butch O’Neal, a.k.a. Hardass, sauntered into my head that he was a Brother waiting to happen. What I didn’t know, and couldn’t have guessed at, was the rest of his story- specifically the special place in the Brotherhood’s world he would come to hold. I loved him and Marissa together; they were and remain the perfect example of opposites attracting with her being so refined and him being a rough neck ex-Homicide cop with a Southie accent. Hands down my absolute favorite scene with him came at the end of Lover Revealed. This was just after he was inducted into the Brotherhood at the Tomb- when he walks into the mansion with the Brothers and sees all the doggen and the three females of the house in their mating gowns. Although he’s just been welcomed into the Brotherhood, and it’s a joyous occasion, he feels the absence of the one he loves with great sadness (pg. 447): "Butch wanted Marissa there so badly he couldn’t stand to look at the shellans from the ache in his chest. He was about to make a desperate, pansy break for the Pit when the sea of bodies parted and… Marissa was revealed in a gown of vibrant peach, the color so lovely and vivid he wondered if sunshine hadn’t condensed in her very form." It’s absolutely perfect: always the outsider in the human world, he is now where he belongs and with the female who makes him whole. He is happy and grounded for the first time in his life.

Vishous… yes, it’s true Vishous and I didn’t get along that well while I wrote about him. His book was the hardest to get out and there were days when I thought I wasn’t going to make it for the struggle. It really wasn’t a surprise. From day one, V was the Brother who was the most prickly and standoffish- but man, he warmed up to Dr. Jane Whitcomb! I have to say that one of my favorite lines in Lover Unbound is uttered by Butch. He and V are sitting in the kitchen at the mansion and V and Jane have just gotten back together and clearly this is a good thing. On page 443, Butch looks across the table and says: "Vishous, could you stop grinning like that? You’re beginning to freak me out." I think it’s just fantastic! Clear evidence that the iceman has cracked and warmed up to his female and is looking like exactly what he is: a male in love.

Well, that’s a little something from the first five books! Phury’s Lover Enshrined is coming this June and let me tell you he’s been the perfect gentleman in terms of the writing process thank heavens! I think fans of Z’s twin are going to be very happy with his story- and how he finds love. I know it’s given me the warm and fuzzies to see the Brother with the biggest heart find a female worthy of him and finally come into his own.

Rehvenge’s story is next after Phury’s and then after that… who knows! The Brothers will tell me when they’re ready. And I’ll be here waiting to hear from them God willing!

All the best, and here’s hoping you have a little Brotherly love, just like me!