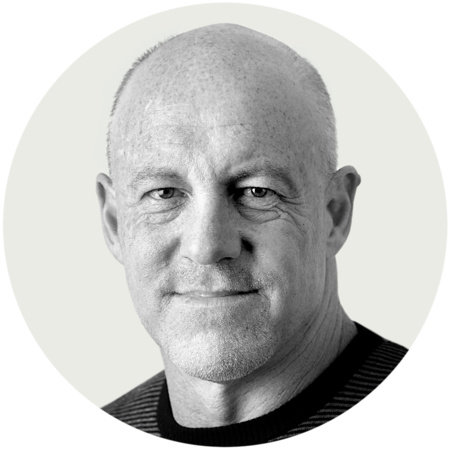 Mark Leibovich is The New York Times Magazine chief national correspondent, based in Washington, DC. In 2011, he received a National Magazine Award for his story on Politico’s Mike Allen and the changing media culture of Washington. Prior to coming to the Times Magazine, Leibovich was a national political reporter in the Times’ DC bureau. He has also worked at The Washington Post, The San Jose Mercury News, and The Boston Phoenix, and is the author of The New Imperialists, a collection of profiles on technology pioneers. Leibovich lives with his family in Washington, DC.

Mark Leibovich has both a trained eye and a sense of humor about American politics, which he covers for New York Times Magazine.

In his 2012 profile of New Jersey governor Chris Christie — appropriately titled “It’s Not All About Him, He Said Often” — Leibovich refers to Christie’s speech at the Republican convention as his “me-note” address and notes that Christie’s best Mitt Romney story was mostly a Chris Christie story. In a 2013 profile of John McCain, he refers to Lindsey Graham as McCain’s “Senate Tonto.”

“It’s been fourteen years for me now covering politics, and it remains interesting to me. Politics in America is extremely different than it was in 2002,” said Leibovich, whose Citizens of the Green Room: Profiles in Courage and Self-Delusion is out in paperback just in time for the 2016 campaign. “Politics tends to reinvent itself and surprises me now as much as it ever has, so I think I’ll be writing about it for the foreseeable future.”

Leibovich sat down with Penguin Random House last week to talk about some of the stories in Citizens of the Green Room, his years covering politics, and the 2016 presidential campaign.

PENGUIN RANDOM HOUSE: Did we learn anything from the most recent Republican debate?

MARK LEIBOVICH: The debate probably didn’t change the dynamic of the race. Donald Trump got the most attention — his renewed vow to not run as an independent, his back and forth with Jeb Bush. He’s way up in the newest polls, so he hasn’t been the flash in the pan that a lot of people expected a few months ago.

PRH: How much has Donald Trump changed how the other candidates are presenting themselves in the campaign?

ML: It’s interesting. The other campaigns haven’t done a lot to adapt. In addition to his high profile and the things he has done to get attention, Trump has been extremely aggressive in using social media — more than the others. He has also shown that offending people at will and not apologizing is — in some circles of the electorate — a very appealing thing. He has created a permission structure to get away with almost anything, and I think a lot of people will try to follow suit and not apologize for things they say.

PRH: Do you think Trump gets to do that because it’s always been a part of his brand, or is it a signal that other candidates could talk more the way Trump does?

ML: It’s definitely a signal that he can get away with it. He’s not looking for another job or run for something else afterward. He has proven that he is somewhat bulletproof with his supporters, and he has a solid floor of support.

PRH: Marco Rubio said a lot of out-there things when he ran for Senate in 2010, and now the Republican base views him as too establishment. Is there a big contingent of conservatives who consider being unelectable as almost a qualification for election?

ML: [Laughs.] I don’t know. Trump has lately boasted about the kind words that Vladimir Putin has had for him. He has been a Democrat in the past. He has a lot of friends who are Democrats. A lot of his policies are in line with the Democratic base — he was very vocal the other night about his opposition to the Iraq War. He represents a figure of anger — a figure of bluster and big talking.

People assume that populism in America today is aligned with the grass-roots movement or economic populism — or in the case of Howard Dean’s campaign or the Barack Obama ‘08 campaign, an internet phenomenon. Trump has proven that the real populism in America is celebrity. That’s what gets people’s attention and gets people excited. When you couple his intrinsic celebrity with the red-meat things he’s saying to the Republican base, that’s a recipe to put you in the lead.

PRH: Do you see signs that a hypothetical Trump-vs.-Clinton general election would be extremely unfriendly to the traveling press corps?

ML: Maybe. It always kind of is. I don’t think there has ever been a good old days when the traveling press was treated very well. Trump attacks the media and has gotten a lot of mileage from that. Hillary doesn’t feel like she needs traditional media either. In part because of social media, there are a lot of ways to go around us. The candidates need us less. And Trump has come up with new and exciting ways to manipulate the media even as he is condemning it.

PRH: One of the things that runs through Citizens of the Green Room is the importance of TV. Have you seen TV to be relatively less significant so far in this campaign?

ML: It might be less important insofar as TV as we know it, but a lot of it has moved to the desktop or onto the phone. The big newsmaking spectacles like interviews and debates are televised, and the vast majority of Americans still experience their news and their entertainment through television. A lot of that now is on platforms that weren’t there even a few years ago.

PRH: Has social media operated mostly as a more unfiltered way for candidates to talk to their own people, or have you seen it changing the campaign more fundamentally?

ML: One reason Trump hasn’t spent much at all on media or on a big press shop is that he doesn’t have to put out press releases all the time to get attention. He can just tweet stuff, and that becomes the news of the day. I’m kind of shocked that other candidates have not copied that. It’s such an easy thing to imitate, and most of the stuff you get from other campaigns is boilerplate, canned stuff.

PRH: It was interesting to reread the Glenn Beck profile, which you wrote before he left Fox News. He still has plenty of followers and makes a ton of money. Why has he disappeared so completely from the bigger conversation?

ML: The biggest reason — to quibble a bit with the premise — is that he just doesn’t reach that many people. His schtick is probably pretty similar to what it was before, but he doesn’t have an audience as big as he had at Fox News. He has been successful with The Blaze and he still has influence, but not a lot of people are going to go and subscribe to that.

PRH: The first piece in the book is a story you wrote in 2010 about Mike Allen and the Politico Playbook newsletter. Does Playbook still drive conversation the way it did five years ago?

ML: Yeah, but less. Things have gotten so much more diffused. Twitter, more than anything, has replaced Playbook for a lot of people. At the start of the day, they look to see what’s in their Twitter feeds. Mike Allen is still there and it’s still important, but it’s harder to break through now.

PRH: You started doing the Podcast for America podcast with two other reporters.

ML: What the world needed was another podcast, so we started one.

PRH: How many people listen to it every week?

PRH: Do you subscribe to the idea that presidential elections are decided more by the candidates motivating their respective voters than people in the middle choosing between two candidates?

ML: To some degree, yeah. For this election, I think, it will depend somewhat on who the Republicans nominate. If they nominate Ted Cruz or Donald Trump, the base should be pretty motivated. The question is the non-base of what used to be the Republican Party. Cruz or Trump would motivate the Democratic base too.

PRH: You wrote a piece in the book about reading or claiming to read The Economist’s year-end issue every December. Have you read it or claimed to have read it yet this December?

ML: I claim to have read it, yes. [Laughs.] I have referred many people to stories in The Economist, so the charade continues.

PRH: Michael Kinsley used to put cards in the back of certain books in bookstores that said to call him and he would pay you something like five or ten dollars, and he said no one ever got far enough to see the card and call him.

ML: [Laughs.] That’s great. I had a boss once — a pretty high-up guy — at the Washington Post who told me he had built his career on praising work he hadn’t read, which was demoralizing because he had praised my work in the past.